Cloudy with a chance of meatballs 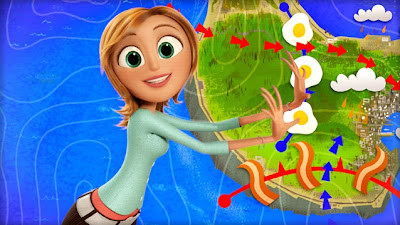 I've had this on the shelf for a while and watched it yesterday. A Disney animation about a geeky kid who invents things and is an outcast at his local school. It's an authentic geek comes good, saves the planet and gets his girl story.

The story is well told as it explores a number of universal themes: child/parent relationships, following your vocation, over compensating in order to impress, collapse of a one industry town, greed and celebrity, self-sacrifice to save the world and boy gets girl. Not bad for 90 minutes of animation - the quality of which is stunning. The way animators are able to render water these days is simply amazing.

There isn't a lot to say about this film, except it takes the original book story and re-presents it in a fun and imaginative way. The voice characterisations are spot on including Mr T as the town cop. If you could call up manna from heaven, what would you choose?

Good family viewing that would allow gentle exploration of important themes with children. I'll give it 7/10.
Posted by Duncan Strathie at 08:24 2 comments: 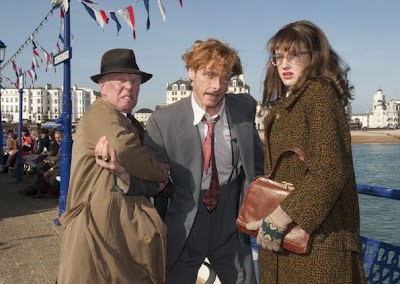 Another trip to London provided the opportunity to return to the Ritzy in Brixton to view this gritty and hard film. A retelling of Graham Greene's novel rather than a remake of the 1947 film with a few interpretative twists of its own. Set in the early 1960's, the film's locations, costume and feel are very authentic all of which struck a deep resonance with my childhood.

As a film, the violence of petty and organised crime in Brighton is stereotyped to the point of ridicule - even the cigar smoking Colleoni played by Andy Sirkis is a character more at home in 1930's Chicago or the Soprano's Bada Bing. Rose is never wholly convincing either as the naive girl or emerging mobster wife besotted with Pinkie. John Hurt also (unusually) delivers a stale performance in a role reminiscent of the Chancellor in V for Vendetta. In terms of performances it the menacing Pinkie (Sam Riley) and in particular the resolute Ida played by Helen Mirren who carry the film.

There is a recurring theme of Roman Catholic faith that threads its way through the story. Pinkie believes, but only in hell. Rose believes and we see here strikingly in a church from above a cruciform Christ suspended from the ceiling. Pinkie offers her the choice of freedom or committing a mortal sin meaning she could never go to Church again. She chooses Pinkie and sin.

The script is at times clunky and plot devices are sometimes too contrived, usually in relation to timing. The running battles between mods and rockers add nothing to the organised crime theme that underpins Pinkie's world. There is a high level of deceit and lying necessitated by the plot which made this an uncomfortable watch for me. The moral bankruptcy of the criminal underworld is revealed in all its glory - even to the point of there being no honour amongst thieves! There is constant violence that is consistent with gang-land crime but it is thankfully restrained and demands little in the technicolour department.

This film has too many short-comings for it to be great. Unfortunately it will always live in the shadow of its illustrious predecessor - which will remain a hard act to follow. 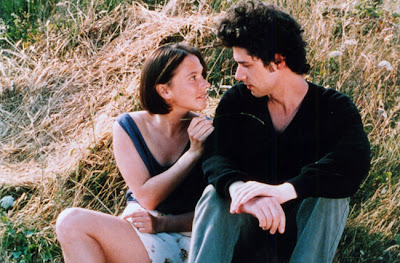 This is the second in Eric Rohmer's Four Seasons quartet of films. Set in Dinard in Brittany, the film charts the romantic journey of Gaspard one summer as he awaits the start of a new job. Having recently completed his Masters in Maths, Gaspard gets off the ferry and finds his friends house where he plans to await the arrival of Lena. The film covers three weeks of a Breton summer.

As he waits Gaspard fills his time with swimming, walking, sun-bathing and composing songs on his guitar. He encounters Margot, a waitress working at her aunties creperie. Margot has herself recently completed a PhD in ethnography and the two of them spend much time together walking the coast and conducting philosophical debates about the nature of relationships and love.  Margot persuades Gaspard to go to a disco with her and her friends. It is here that he meets Solene and afterwards Margot alerts Gaspard to the fact that Solene has the hots for Gaspard. Gaspard begins to see Solene whilst continuing to see Margot as he waits for Lena.

The problem Gaspard faces is that he is unable to make a choice. He prefers to intellectualise romance and play philosophical games. Whichever of the two girls he is with is the the girl he is madly in love with - but he cannot commit just in case Lena proves to be an even bigger catch. Margot is self-assured, charming, attractive and refreshingly straight-forward. Solene is flirtatious but always wants everything on her terms and sees nothing wrong in stringing two or three boys along at the same time. Lena doesn't arrive until three-quarters of the way through he film.

With each of the three Gaspard attempts to clumsily paw and kiss them. Each rejects his advances for different reasons. Margot because he is intent on Lena and/or Solene and in any case her boyfriend is due to return from overseas. Solene because she likes to play games and toy with her catch and Lena - well that's simply the way Lena is.

Gaspard's intellectualisation of commitment and love blinds him to the fact that Margot is throwing herself at his feet and offers so much to a potential relationship. His mind is seduced by Solene who is more of a sexual tease but whenever things begin to get serious in that department she withdraws citing her principles. Lena is the big prize that Gaspard holds out for as her enigmatic mind-games and pouting tantrums seem only to increase her level of attraction to Gaspard.

Unable to disentangle his mind from the fact that he has got three girls in tow at the same time, he manages to set up a trip with each in turn to the same island destination at the same time and then is unable to get himself out of the fix. Out of the blue, a friend calls with the offer of a deal on an eight-track recorder and as quickly as the ferry delivered Gaspard, he departs on it immediately for a tryst with a tape recorder in La Rochelle. All of which demonstrates that the only true passion in Gaspard's life is music and that girls are nothing more than an intellectual interest.

That well educated, maturing twenty-somethings could allow themselves to get caught up in such shallow and empty mind-games is a surprise. That each of the three women are in different ways very attractive is not.  The film maintains the tension of latent sexuality fervently simmering throughout - I was expecting sexual activity to spontaneously erupt at any point, but it never does. There are kisses with Solene and Lena and when Gaspard attempts the same with Margot she gently but firmly repulses his advances. It is as Margot and Gaspard stand on the jetty as he waits to board the ferry that will take him away that we see the first and only really passionate kiss - and that at Margot's inception. A literal taste of what he will be missing because of his pursuit in women of unreachable perfection - and for him in the pre-eminent sphere of music, an eight-track tape recorder! There are no winners in this story.

An interesting but ultimately frustrating film. I'll give it 6.5/10.
Posted by Duncan Strathie at 08:25 No comments: