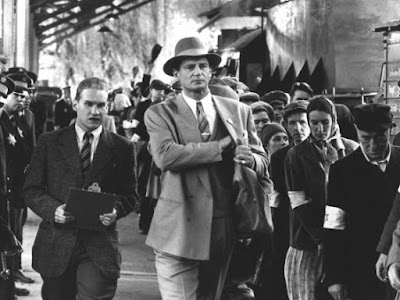 I can't believe I hadn't seen this film earlier! I knew it had won seven Oscars and was critically acclaimed but as with any film that draws such hype I am sceptical until I see it for myself. Having seen it, my question is - why only seven Oscars? There are films that because of the craft of the acting, writing or directing performances, attract a disproportionate level of hype. There are films that because of their subject matter, timing or context also garner more plaudits than might otherwise be the case. On both counts, this film is a genuine winner.

For me films like this are important. I'm not Jewish, or German, or Polish, but I was born in the 1950s in West Germany because of the aftermath of WWII. My parents moved a lot when I was young and I have nowhere that I call home apart from where I live at the present moment. For me, watching films like this forms part of my own search for a sense of self-identity. I feel a connectedness to the events portrayed as they took place just over a decade before I was born.

Perhaps this was a contributing factor to taking a short break in Krakow only two weeks ago. When in the city, the legacy of Nazi Germany and the Holocaust are ever present. Tours to the ghetto are widely advertised as is the extensive Jewish cemetery. Five years ago I visited Bergen-Belsen and whilst in Krakow I visited Aushwitz-Birkenau which is only 75 minutes away. I also visited Schindler's Factory in Krakow which has been turned into a museum - quite the best of its kind. It was probably this that prompted a viewing of the film that has long been in my library. It was compelling to see parts of the ghetto and factory building that I had walked only a few days before.

Whilst the Holocaust is the context in which this 187 minute long film plays out, it is not a film about the Holocaust but about two German men caught up in it and their differing choices about the role they take. Oskar Schindler (Liam Neeson) is a flamboyant, womanising, entrepreneurial, trickster with a heart of gold. Amon Goeth (Ralph Fiennes) is the Concentration Camp Commandant who is a psychopath with a heart filled with evil.

Schindler is spared the war as he is an industrialist - not a very good one, but someone who wants to open a factory in Krakow making items that are 'indispensable' to the Third Reich - enamelware. The factory employs 'skilled' Jews as they are cheaper to employ than local Poles. As Schindler builds his relationship with the local Camp Commandant Goeth, he audaciously treads a thin line between being found out and buying off people with bribes. Later in the film he opens a munitions factory in Czechoslovakia and insists that an expanded Jewish workforce is transferred there to staff it. What is remarkable is that neither factory is very productive but they do generate a lot of wealth for Schindler who lavishes it on getting the German officers drunk and on bribes.

The central core of the film is the relationship between Schindler and Goeth and how Schindler is able to exert a positive influence on him. The many Jews who live in the ghetto, work for Schindler or get caught up in the local Concentration Camp feature on the whole as a group under sentence of death. Some of them feature more prominently and give us an insight into their background, families and skills.

The film is shot in black and white, apart from a heart-wrenching splash of red once or twice. The ruthlessness and inhumanity of the Nazi war machine and the Final Solution are laid bare for all to see. Acts of kindness, humour and generosity appear randomly as the human spirit and Jewish heritage battle to stay alive. Steven Spielberg as Director has treated the story with great respect, creativity and hopefulness as he delivers a tour-de-force worthy of its accolades and awards. Parts of the film are necessarily brutal - much of it hopefully endearing.  There is so much more to this film than I have touched on here. If you have not seen it, please do. It's not so much great entertainment as great education and offers a chance to reflect on how our own humanity plays itself out. I'll give it 9/10.

Posted by Duncan Strathie at 16:34 No comments: