I originally reviewed this film here when it was first released. I thought I'd catch it on TV a couple of nights ago and it popped off the screen with a visual freshness that was appetising. What struck me this time was that so many of the visual motifs and plot devices seemed to mirror, or perhaps echo The Matrix trilogy. I guess 'The Grid' and 'The Matrix' are obvious parallels but the visual stylisation, connotations of a search for utopia, machines versus humans, virtual and real worlds, a project corrupted and the need for sacrifice to redeem it - perhaps these are simply parallels of good sci-fi stories or perhaps the Wachowski's borrowed the best bits from Tron - who knows? There is a lot of discussion and comparison of the two films in the blogosphere and even a youtube comparison here.

One anonymous comment on my original review fairly said that I had not included anything much on the moral/ethical issues the film offered up. Let's see if we can begin to rectify that.

The utopian dream has long been a part of human desire. The offer of reconciliation to our Creator both partially now and fully at some future point as set out in the Christian gospel is seemingly insufficient for many people who demand an instant utopia. Well the story goes that we had it, screwed it up and a sacrifice was needed to offer the hope of restoration. Why is this such a recurring and strong theme in sci-fi? But if we were to simply sit back and wait for this future realisation to manifest itself in all its fullness, we would be removing ourselves from the opportunity of helping to usher it in, in part, in the here and now. Just as Kevin Flynn (Jeff Bridges) in Tron wants to "change the world", that is precisely the mission of The Church as we move towards the full reboot of creation.

Science, technology and human ingenuity have, since The Enlightenment, been seen as the routes through which we will move inexorably towards perfection. World wars, financial crises and our fragile ecosystem all serve to threaten the realisation of the Enlightenment Project. Is the answer simply to produce better programming algorithms, more effective machines and Artificial Intelligence or are there alternatives? Is the justice sought by Morpheus (Matrix) or Flynn (Tron) the only worthy options or do the goals of the Machines or Clu offer any hope at all?

The dubious moral behaviour of Corporate Business as manifested by ENCOM is another thread the film offers for reflection. The parallel of Flynn's partner in the real world - Alan Bradley being played by the same actor (Bruce Boxleitner) as Tron in The Grid sets up the moral polarity of Flynn/Bradley and Clu/Tron. However, right at the climax of the film Tron remembers that he was reprogrammed by Clu and elects to rebel and help the fleeing Flynns and Quorra (Olivia Wilde) - a nice twist.

Quorra is an ISO (Isomorphic Algorithm) a being made up of programming code but fully interactive and functioning with humans. I'm not sure who she is meant to be if we are intended to extrapolate a parallel within the other imagery that is going on. This brings us close to eisegesis - that is reading something into the text of the film rather than exegesis (reading out from) which is what I attempt to do on this blog.

The fact that Clu lures Sam Flynn (Garrett Headlund) into The Grid to search for his father is merely a device to open the portal and so allow Clu and his (clone?) army to invade earth and wage war on imperfect humanity. This might set up some kind of final battle or Armageddon and invokes possible parallels with parts of the Biblical Book of Revelation.

During his years of incarceration in The Grid, Flynn senior has developed into a Zen Buddhist. As the film reaches its climax he withdraws to meditate saying that he is going to "knock on heaven's door" inviting a comparison with Dylan's lyrics of the song of the same name

Mama, take this badge off of me
I can't use it anymore.
It's gettin' dark, too dark to see
I feel I'm knockin' on heaven's door.

Mama, put my guns in the ground
I can't shoot them anymore.
That long black cloud is comin' down
I feel I'm knockin' on heaven's door.


but at the same time suggesting the activity of prayer and a parallel with Jesus praying in Gethsemane on the night he was betrayed.

The film is rich in themes and motifs that invite many comparisons with other familiar reference points. How intentional all of that is, is a moot point. I enjoyed watching it again and predictably 'saw' much more in it on this viewing. If you've not seen it, put it on your 'to watch' list.

Posted by Duncan Strathie at 17:41 No comments: 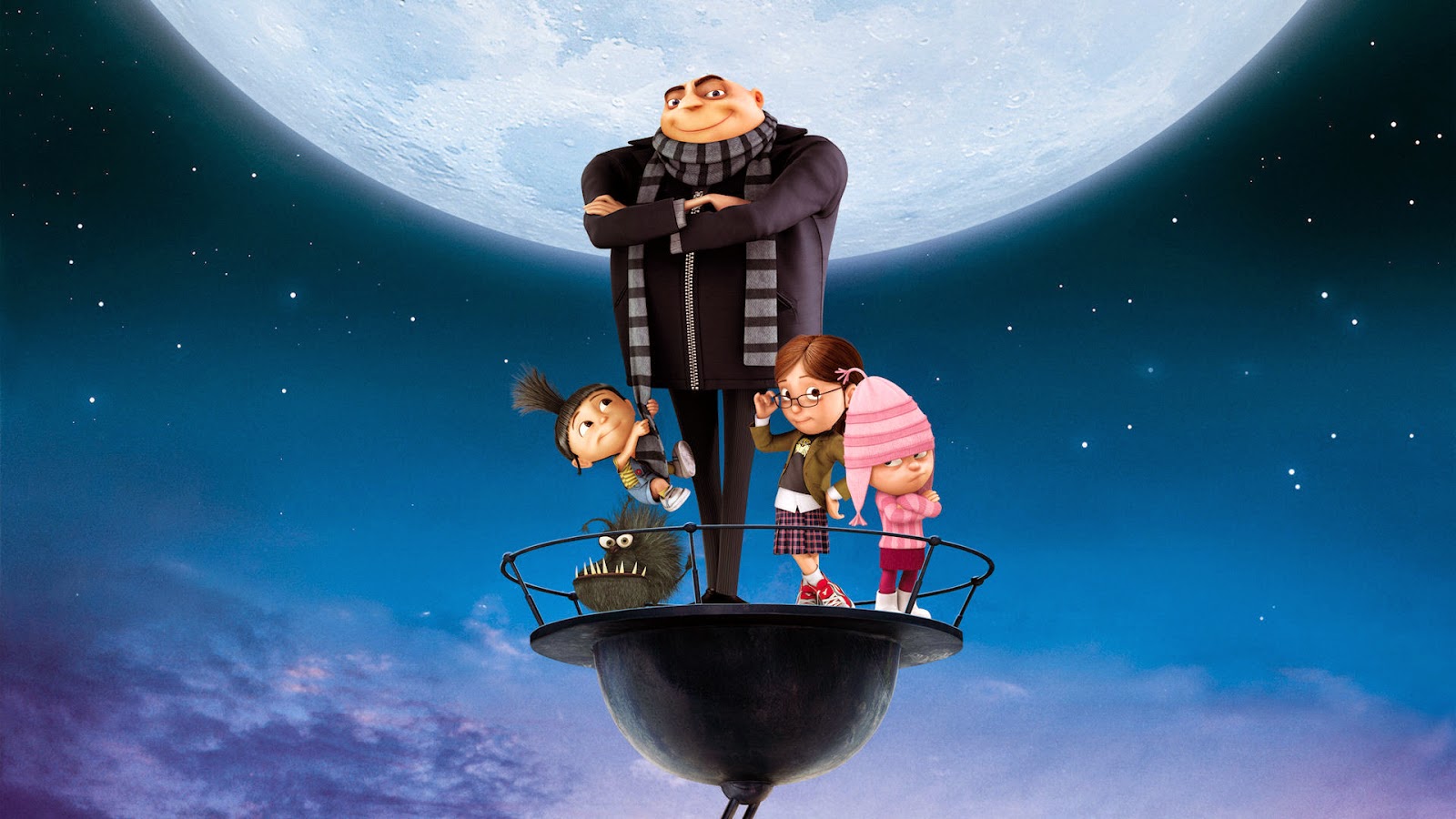 I stumbled on this on TV and decided to watch it. I am glad I did. I love films and stories that work on multiple levels. This film can simply be enjoyed with a naiveté that sees it as a children's animated story - and a good one at that. In the same way the bed time stories in the film could be received at face value, they always point to a deeper reality and invite the listener to interpret things differently. Allegory is an amazingly creative tool.

When I think back to the hand-drawn cartoons of my childhood with their big blocks of solid colour and repetitive character movements there is little comparison to today's hi-tech computer generated animations. The characterisations and facial expressions are more natural than real life and of course with the chance to redraw each frame until the Director achieves 'perfection'. The fluid and natural movement of objects such as Gru's scarf are a real delight to watch. The film presents a visual feast!

The story has been around for as long story tellers have been plying their trade. It is very simplistic and the 'narrative arc' is established and set out early on. If the film were that simplistic, it would be a write-off. However, whilst the story line is straightforward the plot and character development (yes I know it's animation) are anything but. The characters evoked a wide range affective responses in me such as a strong dislike of Vector and Mr Perkins, empathy for the three girls and a strong desire to see Gru come good. I almost had a tear in my eye at the end such is the power of story.

The story could be a modern-day Pilgrim's Progress or morality tale which holds out the hope of transformation from darkness to light for even the world's most evil criminal mastermind. In playing out this story we are invited to hope that such transformation is not beyond our own experience and within a Christian reading of the story (parable?) the orthodox response is to see the Holy Spirit at work (possibly through the agency of the hope and love offered by Margot, Edith and Agnes) bringing about Gru's transformation and the happy ending. Happy endings are such a Western culture thing. I wonder how folk in 'the East' feel about the Western need to provide such a closed loop with a neat resolution at the end?

I am now looking forward to the sequel. This is a visually exquisite film with great characters and voices which add much value to an otherwise familiar and unexciting story. I'll give this 8/10.

Posted by Duncan Strathie at 10:09 No comments: