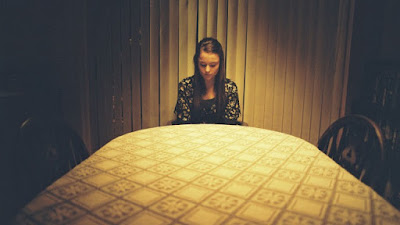 This is a powerful piece of cinema. A film which is driven both by its narrative and by the characters as they navigate the tensions created by their commitment to their faith as Jehova's Witnesses. You will not leave the cinema with your heart uplifted or with a skip in your step. There are few splashes of colour in this story. The austere grey concrete and weather of Oldham, reinforced by the native accent, help this film to have the feel of a docu-drama at times.

The film does not ridicule the sect of Jehova's Witnesses but with great sensitivity tells a story set firmly within the world of the central Oldham Hall of JWs. The way in which it tells the story leaves the viewer in no doubt about how the organisation operates and how it controls the lives of its adherents. This is no recruitment film!

The fact that it centres on JWs is in a sense is irrelevant. The kind of life set out by this particular faith community could equally play out in any part of Christianity that holds to a fundamentalist position wherever on the theological spectrum that might be.

Written and Directed by Daniel Kokotajlo, himself a former JW, this film shows what life can be like as a Witness. It is easy to caricature people who believe things that are different to me, or who as a consequence behave differently as a result of those beliefs. This film does not do that. Neither does it slide into the temptation to slushy sentimentalism that would have been so easy. What makes the film so effective as a means of delivering Kokoyajlo's story, is the acting of the three main characters. Here we have three women who together form a completely believable family: mother Ivanna (Siobhan Finneran) and her daughters Luisa (Sacha Parkinson) and Alex (Molly Wright). Together they attend 'meetings' at the local Hall, engage in street evangelism and even learn Urdu to enable them to go door-to-door in an attempt to proselytise local muslims.

The heart of the Christian message should be about love, grace, forgiveness and reconciliation. In this film, the way it is portrayed as being lived by members of this sect, is something that is more about fear, working to earn salvation, condemnation and alienation. The film clearly depicts that leadership within the JWs is male, completely lacking in compassion, middle-aged and domineering. The only permitted engagement with 'the world' is for the purposes of evangelism - anything more and it will be interpreted as the slippery slope of apostasy which will lead to the local elders disfellowshipping any individual thought to be guilty of fraternising with non-believers.

There are many bits of back story that I would have liked to have known to help establish why things are as we find them at the start of the film. They are not forthcoming, which in a very real way adds to the pressure cooker feel that the film engenders about this family at this time in their common life together.

I came to faith in a community that was theologically very conservative and where the link between belief and behaviour was so direct, that any transgression would be dealt with harshly and publicly. The message preached week-by-week was 'come ye apart' to preserve your doctrinal purity, lest the world taint you. As a consequence, this film set a series of resonances rumbling that I found disturbing. It highlighted for me the the almost impossible task of balancing freedom with responsibility in terms of being a disciple of Jesus Christ. Whilst many of the beliefs would be common, different churches set the threshold of tolerated behaviour at different levels. Does that make members of one church any less effective as Christian disciples than another? Despite the good news of Jesus Christ being an open and grace-filled invitation, our predisposition to feel guilty all the time and our perceived need to earn anything of merit - including our salvation, disrupt and deflect our attempts to live as people of God in our daily context. This film left me thinking that we probably need good therapy more than we need good sermons!

So, if you want to engage in a gripping character study, a portrait of a Christian family, the attraction of a sect or be led to reflect on how what you believe impacts the way you behave, this one is for you. It is not an enjoyable watch but it is gripping and engaging and I know I shall be reflecting on it for a long time to come. I'm already thinking about how I might need to tweak tomorrow's sermon as a result of having watched it! It is available now on a streaming service from Curzon and Amazon. This is a disc I shall be adding to my collection as soon as I can. A great film. I'll give it 9/10.

Posted by Duncan Strathie at 09:31