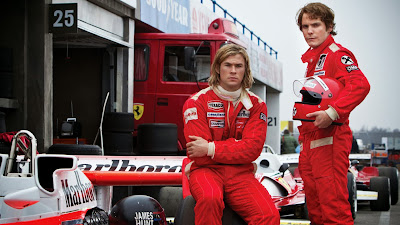 Whilst the context for this story is Grand Prix racing, this is essentially a story about two very different men. You don't have to be a Formula 1 fan to enjoy this movie. Whereas Senna was a docudrama, this is more a dramadocu if that makes sense. Director Ron Howard employs creative licence at key points. Each frame of the film is imbued with raw emotion that draws you in and engages you. The film explores the rivalry between Hunt (Chris Hemsworth) and Lauda (Daniel Brühl) as they make the leap from Formula 3 to Formula 1 in the mid 70's.

I was in my late teens when this was for real and I remember many of the highlights of the story - including Lauda's terrible crash and too many others around that time. Ron Howard has faithfully recreated the 1970's feel with its unregulated pit lane and the wheel-to-wheel jousting. The story captures the insecurity that lies beneath Hunt's playboy bravado and Lauda's detached, almost clinically forensic approach to not only building racing cars but also relationships.

This is a film about drivenness as both the main characters were driven - but by very different motivators. Hunt squandered the privileged start to life his father's wealth and position had secured - if you ever need a visual representation of the Prodigal Son, without the repentance, this is it! The film dramatically depicts Hunt's lust for life and sexual encounter - near the beginning he walks into a hospital ER and announces himself in 007 style as 'Hunt, James Hunt. Weren't you expecting me?' The story uses creative license to show that Hunt did have standards and a code of honour by which he lived - his treatment of a journalist who asked a cheap question at a press conference evidences that. The episode is believable. Although Hunt and Lauda continually spar like bickering teenagers, it becomes clear as the film develops that both hold the other in the highest regard. There are also moments of comedy that involve both characters.

Lauda too had a privileged upbringing and was offered the chance to take over the family business and become wealthy. He renounces his father's offer and sets off to take out a loan and buy his way into Formula 1. Each driver was totally assured of their own ability and saw the crown of World Champion as being rightly theirs. Lauda's attention to engineering detail to enable his car to perform better is contrasted with Hunt's gladiatorial approach where it's all down to the chase for the top place on the podium. One man thought, the other felt - but that is too simplistic as both are portrayed as complex characters who both felt and thought.

Lauda's 'proposal' to Marlene (Alexandra Marie Lara) is more honest and down-to-earth than Hunt's proposal to Suzy (Olivia Wilde) but whereas one underwhelms but delivers, the other flatters to deceive and it all ends in tears. The scenes of Lauda being treated for his injuries and the pain which he actually, and Marlene vicariously, experienced are both graphic and gripping. By painfully forcing his helmet over his healing wounds Lauda built up the resilience and motivation to return to racing just six weeks after his horrific accident.

The cinematography is at times highly inventive - cameras inside driver's helmets. The soundtrack is pounding out the beat in a way that sync's beautifully with the rhythm of the race track. Both lead actors deliver noteworthy performances as they enact a screenplay that is textured and multi-faceted - it tells a great story very well. At a touch over two hours it is well paced and never lags. The only thing I would be critical of are the CGI effects that at times looked too superimposed to be convincing.

This is a great film and one which should be enjoyed by all. The favourable reviews have got it right. Go and see it while it's on general release - truly a film that gives more on the big screen. I'll give it 8.5/10.

Posted by Duncan Strathie at 18:34 No comments: 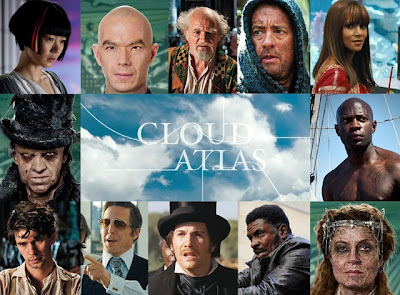 "What is an ocean but a multitude of drops?"

I'm not sure I've ever watched a film that is the best part of three hours long and not checked the clock to see how time is progressing. This film is breathtaking, enthralling, captivating, thought-provoking and epic in its scope. The best film made this millennium - so far. I liked it - a lot.

This film made it's debut a year ago today at the Toronto Film Festival and has been polarising critics and audiences ever since. I can imagine that if you simply sit down and watch it without any prior knowledge it could be as bewildering as it is mesmeric. Both my youngsters (at university) had seen it and confessed to not really understanding what it was about. Some reviews I read when it was released came to similar conclusions. I tried to see it in the cinema when it came out but didn't manage to and I made sure I got a copy on disc as soon as I could. However, people's comments made me wary and I didn't rush to watch it - so it sat on my shelf with too many other unwatched discs.

The film is produced by the the Wachowski siblings, Lana and Tom and also Tom Tykwer and as many of you know, they were responsible for my favourite film of the last millennium! (Or at least the Wachowski's were). It's production budget of $102m is the biggest for any independently produced film (made by Babelsberg - Germany) and it has already turned a profit - despite not being a runaway success at the box office. I have a feeling that this film will be a sleeper and will achieve cult status much like Shawshank and Blade Runner have, long after their theatrical release.

The film is based on David Mitchell's book of the same name. Not only did I read the book first, but I also listened to it on audiobook - an unusual thing for me to do as I prefer to see the film first - it makes visualising the written story much easier for me! I'm glad I did as I was able to make some sense of the film.

The premise of the film is that 'everything is connected' and that an action in some part of our history can trigger an outcome much further down the line. In discussing the film, I'm not really giving anything away in respect of the narrative. It is not so much the story that is noteworthy but the way in which it is told. This is an old-fashioned morality tale.

Mitchell's book employs a literary device that introduces us to six seemingly unrelated stories, each set in a different era. Each story uses a different writing style and presents itself as a different genre of writing. A character from one story impacts the story that follows and act of kindness repaid in Victorian times aboard a sailing ship on the Pacific Ocean sparks hope for a new future in a post apocalyptic dystopian community living on 'The Big Island' in the 24th century. Whereas Mitchell's book employs a straightforward 1-2-3-4-5-6-5-4-3-2-1 sequence in terms of ordering the stories, the film jumps from one to another as it parallels the fall and rise of the characters within in each as they mirror the same story of greed, deceit and murder. The edits are at times brutal and just as Mitchell's book will leave a story in mid sentence so the the film's edits juxtapose a VW Beetle with a maglev transport and then a three-masted sailing ship. The device that really adds layers of complication to unpicking the film is that the same actors play different characters in each of the six stories!!!!

The six stories are:

"Literally all of the main characters, except one, are reincarnations of the same soul in different bodies throughout the novel identified by a birthmark...that's just a symbol really of the universality of human nature. The title itself "Cloud Atlas," the cloud refers to the ever changing manifestations of the Atlas, which is the fixed human nature which is always thus and ever shall be. So the book's theme is predacity, the way individuals prey on individuals, groups on groups, nations on nations, tribes on tribes. So I just take this theme and in a sense reincarnate that theme in another context."

Visually the film captures each of its eras with stunning and creative attention to detail. The soundtrack has been nominated for and has won awards. I imagine that watching on the big screen is a very different experience to seeing it on a TV - it will be more immersive, especially on IMAX. The acting is first class from the whole cast - with some actors crossing gender to play their character! There are some passages of the film that follow the book exactly and at other times, locations, events and dialogue have been changed to deliver a film that is highly creative but remains faithful to the book.

This is undoubtedly a film that will repay a little homework before watching, a lot of concentration whilst watching and a life-time of reflection after watching. I would happily see it again tonight! Get the drinks and popcorn in and settle down for a wonderful experience. This is the first film on this blog to score 10/10!

I came across a very interesting analysis of this film from a Humanist/Buddhist perspective in the Journal of Religion and Film published by the University of Nebraska by Ting Guo. Click here for the link.
Posted by Duncan Strathie at 08:07 No comments: