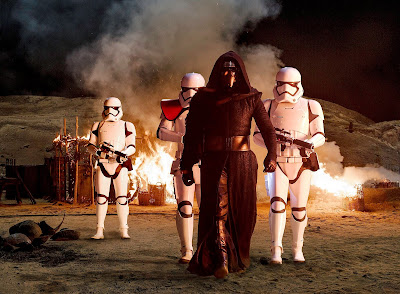 After the so-so Spectre and the dismal Mockingjay: Part 2, I am happy to reflect on a film that exceeds expectations! Of course everyone was wondering how faithful to the heritage of what has gone before this film would be - whilst still developing the Star Wars universe, the story and the characters. J J Abrams accomplishes the task with ease and panache. At 135 minutes long I didn't feel any point was slow or that it dragged. Yes, aspects of the plot and the devices were predictable and repeats of scenes from the first six movies - but that is precisely what gives it continuity and a sense of connectedness to the original George Lucas (Episodes IV, V and VI) films from 40 years ago. If we didn't have TIE Fighters and X-Wings, Light Sabres, Jedi, good people and bad people, it simply wouldn't be Star Wars!

Without giving anything away of the story, what worked particularly well for me was how the original characters were interwoven with the situation 30 years on and how new, younger characters were introduced to set up a run of films that can see them grow and develop as they attempt to once-and-for-all defeat the Dark Side. Carrie Fisher as General Organa, Harrison Ford as Han Solo and Mark Hamill as Luke Skywalker all reprise roles they last played in 1983 - and it seemed to me that their length of time on screen was directly related to their acting ability. It was good to see them again - changed, yet the same.

There are subtle visual updates, new planets to enjoy, great new animatronics and the predictable CGI which every now and again stands out as not being organic to the scene. It is great that this film was made in the UK and wonderful to see extensive use of the Forest of Dean and the former US cruise missile airbase at Greenham Common near where we used to live. Derwentwater in the Lake District and Skellig Rocks in Ireland also made a welcome appearance. Add in the deserts of Abu Dhabi and New Mexico and the frozen wastes of Iceland and you get a wide range of vivid, contrasting and engaging landscapes.

The central core of the story is good versus evil - no surprises there. Who will be the saviour figure this time who will redeem not only the good but challenge the bad to come over to the light side? What is wonderfully surprising is the creation of a new kind of droid - BB8 - that is so human in its bleeps, expressions and movements it makes you feel like you want to take it home as a pet.

Episode VII of the saga was never going to break any astonishing new ground in terms of how we understand the basic premise of the Star Wars plot or universe. It could so easily have become bogged down in trying to be everything to all people whereas instead it simply moves the story along a notch in an engaging, action-packed and believable way. New characters and worlds are introduced in a sympathetic way. Whilst the Dark Side seemingly no longer possess the menace of Darth Vader, it does possess sufficient menace to keep the good guys busy. Believe the hype - Star Wars is back. Go and see it! I'll give it 9/10.

Posted by Duncan Strathie at 17:36 No comments:

I had been waiting with a degree of excited anticipation in hope that the fourth film in the trilogy [sic] would make good the shortcomings of the previous offering. I was so disappointed. This film grinds relentlessly towards a dull and laborious conclusion with little excitement and no inventiveness in terms of plot, character or narrative development. Poor. I can't remember the last time I wished for the film to stop so that I could read the book to get to the end more quickly! At 2:17 this film is way too long - particularly when you consider it is half a book!

The earlier films set up the narrative arc of the trilogy nicely and we all knew what Katniss (Jennifer Lawrence) had to do - it was simply a case of how would she do it. In the end the climax is so predictable and at the same time unfulfilling. Yes, there is lots of action and the bloodiness of close combat urban civil war is portrayed with gruesome and graphic brutality. The action sequences, CGI and creativity of weaponry and adversaries of war were all very good.

For me there are two areas that fail to fulfil their dramatic potential. Firstly, the love triangle between Katniss, Peeta (Josh Hutcherson) and Gale (Liam Hemsworth) is devoid of energy, warmth and, essentially, passion. What had previously been a central part of the story seemed to be a shadowy side line in this concluding film. Secondly, the manipulation of Katniss by Snow (Donald Sutherland) and Coin (Julianne Moore) to achieve their own self-centred ends seems nothing but a mirror of Color Force and Lionsgate's manipulation of Lawrence to extract maximum dollars from movie goers as the franchise is milked beyond dry.

The one redeeming bright light in the film remains the thing that sets Katniss apart in the whole story - her moral compass. When those around her seem unable to exhibit objectivity and compassion, Katniss steps up to the plate and scores a series of home-runs. Most notably among these is the way she assassinates the President. Her attitude to Peeta - willing him to recover - is also commendable.

The acting in this film is strong - but the script and lumbering plot mean the characters are always held back from reaching their potential. Philip Seymour Hoffman's Plutarch Heavensbee is a strong performance - sadly his last. Sutherland's menace is convincing as President Snow and I loved Woody Harrelson's Haymitch Abernathy.

I was disappointed with this film - as you may have gathered. For die-hard devotees of the Hunger Games it will be essential viewing. For anyone else, it exposes the folly of stretching a trilogy into four parts simply to make money - artistic and creative product suffer in order to deliver a bottom line. If you can, wait for the boxed set to be released on disc. At least at home you can switch if off or skip chapters when it gets too boring! I'll give it 6/10.

Posted by Duncan Strathie at 08:20 No comments: 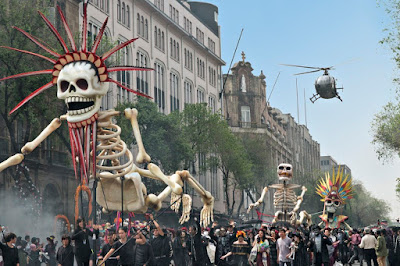 This will be a short reflection as there really isn't a lot to say! If you enjoy the genre then you will enjoy this film. If you are looking for a clever plot or a good development of the narrative then this is not for you. The locations are stunning - Mexico City, Rome, London (but too reminiscent of the latest MI offering) and the deserts of Morocco. The lead characters all give solid performances but their characters are little more than passengers on a express train of action and violence that careers out of control to a predictable and at the same time unlikely conclusion.

I was surprised that the bbfc rate this as containing 'moderate violence and threat' and have awarded it a 12A certification. Having eyes gouged out in graphic close up and other acts of wanton violence splattered across the screen is further evidence of the growing desensitisation to violence that our society is undergoing. How long before we see a U classification for a film like this?

The Bond ladies are in evidence but with more substance than has previously been the case. This is a welcome development that is continuing the trend of recent offerings. Monica Bellucci is simply sizzling as the widowed Lucia Sciarra but surely seduction on the eve of her husband's funeral is a step too far - even for Bond? Bond's new girl is Dr Madeleine Swann played by Léa Seydoux who is very comfortable in the role and adds an edge of intellect otherwise lacking. Christoph Waltz lacks his usual impact but is competent enough as the villain.

The plot, such as it is, offers a timely reminder of the potential perils of the growing culture of global surveillance. With the increase of terrorist activity around our world, governments acting in the 'best interests of their people' are increasing their security reach. This is a development that is not without cost.

The settings, action and stunts make this a solid Bond film and devotees will not be disappointed. However, if you are looking for anything much beyond that, disappointment will come knocking. Is this Daniel Craig's last outing as Bond? He did appear a tad tired and disinterested. I'll give it 6/10.

Posted by Duncan Strathie at 08:27 No comments:

The Lady in the Van 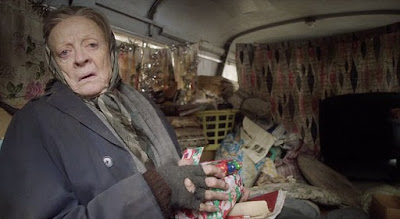 From the trailer and the cast list I knew this was going to be good. I was wrong. It was excellent! The plot is quite simple and sharing something of it won't spoil things for you as this film is not plot driven but propelled with great force by the characters.

Originally a West End play (1999) the film is based on the true story of playwright Alan Bennett's encounter with an eccentric woman Miss Shepherd (Dame Maggie Smith) who lives in a camper van. After months of simply parking the van at the side of the pretentiously swanky suburban road in bohemian Camden in London - much to the annoyance of some of the local residents -  the conflicted and indecisive Bennett invites her to park on his drive. She ends up being there for 15 years. Miss Shepherd is secretive and has an amazing past as a concert pianist and would-be nun. At one point she was committed to an asylum by her brother. The main reason for her lifestyle is that she fears arrest for murder in a hit-and-run accident that happened years ago.

She is not allowed to forget the accident and feelings of guilt overwhelm her. Despite not making it as a nun, she regularly seeks the confessional and feels unable to receive God's forgiveness. Living life under perceived ongoing condemnation from God gnaws at her psyche and adds to her eccentricity - but even as a young woman, flashbacks show us that she was not easy to get along with.

There are many moments of comedy in this film - but there are also many deep insights into human nature and the fears that drive us to irrational solutions to simple problems. The film evoked in me a constant stream of emotional responses which at times became a raging torrent. Maggie Smith is able to convey such depths of emotion simply by the way she holds her eyelids and gazes into the middle-distance. Alan Bennett, as all great writers, is a keen observer of life and the human condition, and writes with great humour and humanity to record the obvious which somehow would otherwise go unobserved. The acting by a strong ensemble cast is as good as it gets. The subject matter, the performances and the locations combine to produce a film that has a very English feel about it. It is simply exquisite cinema.

As dominating as Maggie Smith's performance is, it needed to be set against an equally brilliant portrayal of Alan Bennett by Alex Jennings. Jennings plays two sides of Bennett's conflicted and divided personality - the person living in the real world and the detached and remote observer who is the playwright. Their extended dialogues are simply wonderful and the drole nasal Yorkshire intonation of Bennett provides an aural wallpaper that permeates every scene.

This is without doubt a special film. The acting is top class and the whole dramatic presentation draws the audience in and evokes a strong response. Do go and see it - and then go and buy the disc once it is released. This kind of film-making deserves to be supported. I'll give it 9/10.

Posted by Duncan Strathie at 08:07 No comments: