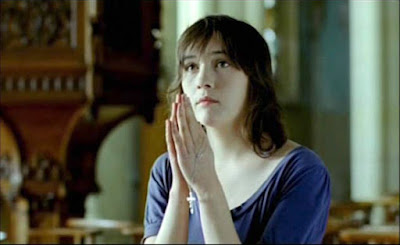 The way the film is made and the way the story is told are almost of equal stature. The way the script explores and develops the thoughts within a 13th century poem by the Flemish mystic Hadewijch, is masterful. The techniques used when the film was shot to enhance the narrative in a way that strengthens the impact of the story - and this story has many points of impact.

I also found the film frustrating. Sometimes what we were being told seemed so obvious as to be pedestrian. A jump-cut would then take me to another seemingly unrelated scene where I would be struggling to make any sense of what I was watching. There are long passages without dialogue which further enhances the visual storytelling. The added benefit is that the film is in French with good clear subtitles, so when there is little dialogue, it's easier to keep up!

The central character Céline, at the same time feels overwhelmed by the immanent love of God and distressed by the absence of God's presence. For much of the film I asked myself "is she behaving like that because she is naive or because she is so sure of her place before God?". The casting of Julie Sokolowski as the central character is a masterstroke. The way she presents herself and acts makes her character sexually attractive and in the very next frame androgynously asexual and not at all attractive.

The film plays out exploring the paradox of the opulent and privileged central Parisian home life of Céline with the spartan and hopeless existence of Yassine (Yassine Salime) who lives with his brother in a project on the outskirts of the city. It explores the seeming paradox of Christian devotion and Islamic devotion but sadly the film gets sucked in to portraying Christianity with much more sympathetic stereotypes than it does Islam. It explores the paradox of those with faith having no experience of parental love with a convict whose mother believes in him unquestioningly. The film explores the paradox of who is condemned and who acts as saviour. It explores a myriad of other paradoxes as well.

If you are prepared to watch a film that will get under your skin and messes with some of your more comfortable preconceptions, this might be for you. If you want to see people transfigured by an aura when they are having a deep and meaningful experience, this is definitely for you. If you like clever cinematic storytelling you'll love it. In the first scene when we see Céline praying, see what's outside her window. Also, when the convict is with his mother, see what's on the TV in the background - there are others - ikons into other worlds.

Above all, if you enjoy exploring and reflecting on paradoxes, especially in a faith context and are open to discovering new things about yourself - this is definitely for you. Reading the poem written nearly 800 years will help with some of the interpretation. Whether you read it before you watch or afterwards, I will leave to you to decide. The rest is up to you. I'll give it 8/10.

The poem can be found here.

Posted by Duncan Strathie at 16:38 No comments: