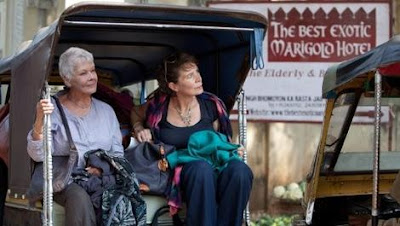 With a cast that includes Judi Dench, Celia Imrie, Maggie Smith, Bill Nighy, John Hurt, Penelope Wilton, Tom Wilkinson and Dev Patel you know this film should be something special. It doesn't disappoint. This is a brilliant film that explores a number of themes with a deft touch that will have you laughing, crying and leave you with a undeniable feel-good feeling. Go and see it now!

The premise is straightforward. A group of retired Brits sign up to spend their final years at the "The Best Exotic Marigold Hotel for the Elderly and Beautiful". Each one of the seven has their own personal demons to exorcise and relationships are at the core of this wonderful tale. The interactions between the characters are first class as Sonny (Dev Patel) the hotel's manager attempts to turn his dream into reality. The advertising material presented the dream rather than the reality and with even his own mother against him, Sonny has his work cut out to stave off closure and the end of his dream.

The narrative develops with a series of epiphanies as different characters discover things that were seemingly beyond their grasp back in their former lives'. A whole range of subjects are engaged with - empty marriages, obsession with status, clashes of culture, racism, caste system, wasted lives', sexual conquest, left things too late and gay regret. That's a list of pretty heavy subjects - it's just as well the dialogue delivers laugh after laugh in quick succession. The film also gives a wonderfully immersive experience of Indian life - you can almost smell it! I've had the privilege of visiting India on many occasions and it left me wanting to return.

I won't say any more about the content of the film to spoil your watching enjoyment. With a cast of this gravitas it's no surprise that his film delivers something special. Dev Patel takes another step on the road to stardom that undoubtedly beckons him. Tena Desae plays his girlfriend in only her third film - I'm sure we'll see more of her in years to come too.

This is a film about life, about love and about making the most of both. The screenplay contains a series of exquisitely funny one-liners which are delivered with great precision. As you can imagine I think this is wonderful film and I encourage you to go and see it - as soon as you can. I saw it on it's fifth showing at Harbour Lights Picturehouse in Southampton - all screenings for the entire weekend were sell-outs on advance tickets. I'll give it 8.5/10. 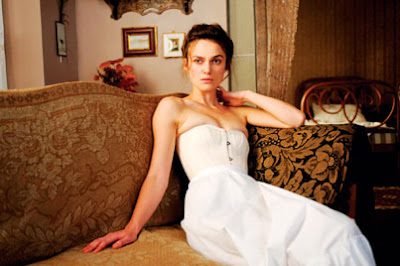 The world of psychoanalysis is a strange and foreign land. In that respect, this film which deals with the academic debate between Sigmund Freud (Michael Fassbender) and Carl Gustav Jung (Viggo Mortensen) in the early developmental stages of the discipline (early 1900's) is true to form. Sadly it fails to rise above anything other than a docu-drama of how Jung was initially drawn to Freud and his ideas and how they eventually parted company because of a major disagreement on how best to proceed. I have it on good authority from two folk I know who are trained in the dark arts of psychoanalysis, that this film offers little by way of enlightenment in terms of the discipline or for that matter as a piece of drama. Added to which a film supposedly set in Zurich and Vienna seems to have been largely shot in Luzern and Konstanz!

The characterisations of the two main protagonists is convincing - particularly Fassbender's Freud whom he plays as an inscrutable Professor who is seemingly fixated on sexual activity and has sired a family of seven children! Mortensen's Jung is more reserved and controlled as he develops his own take on the theory through his practice in Zurich. This includes engaging in therapy with many hysterical women (a not uncommon state among many at the time) including the Russian Sabina Spielrein (Keira Knightly). It may well be the gurning, but Knightly's Russian accent is far from convincing. Knightly's facial contortions graphically depict the affliction and we are given a glimpse of an insight into the workings of psychoanalysis through the therapeutic sessions she undergoes.

Jung manages, almost too quickly, to establish that her hysteria is a reaction to her being humiliated. The slightest humiliation brings on an attack. Further therapy uncovers the truth that as a child she was beaten on her bottom by her father and that at the age of four this produced a sexual stimulation in her that became addictive turning the whole behaviour into a self-reinforcing cycle. The therapy naturally turns into sessions where Spielrein gets strapped to a bed and flayed by Jung and naturally enough one thing leads to another - all in the name of therapy of course! Jung's therapy is so effective and Spielrein's natural ability so strong, that she herself studies and becomes qualified to practice in this new discipline.

Freud's fixation on ego, id and libido is presented as being too restrictive for Jung who is always drawn to interpret dreams and include other disciplines and areas of life and psychology to inform his psychoanalysis. The script is at times dense and academic with little sense of drama or character development. There is little to draw you to any of the characters.

This film had the potential to deliver more - much more. It is sadly safe and only supports the stereotypes which history has given us, without providing any real insight. Knightly's performance is strong and stands above the others. Wait for it to come around on TV. I'll give it 5/10.

Posted by Duncan Strathie at 12:04 No comments:

Tyrannosaur with Q&A with Director and lead 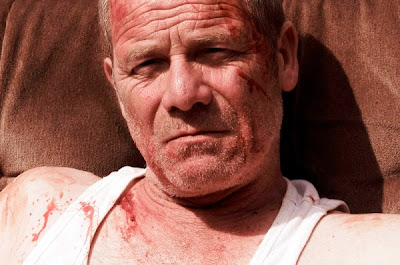 This film is not the faint-hearted. It's gritty realism, sensitive Direction and powerful acting performances enable it to transcend the self-indulgent social-psycho-drama it might otherwise have been. It is bleak and unrelenting as it charts the lives of two people dealing with their own demons and looking for escape.

Joseph (Peter Mullan) has been widowed for five years and lives a solitary life on a bleak housing estate. He is unemployed, drinks too much and has a violent temper on a very short fuse. He has a highly developed sense of right and wrong and is able to read people like a seasoned psychologist. Joseph's world is available for all to see - what you see is what you get and there is the feeling that little if anything is hidden. His rage and violence eat away at him and constantly undermine his attempts to conquer them. He has hardened himself into a world of black and white - lacking in grey, and lacking the ability to demonstrate empathy in any real way.

Hannah (Olivia Colman) - whose performance is a tour-de-force - hides her interior world and presents the persona of a well-meaning, empathetic and sincere committed Christian who runs a charity shop on the estate where Joseph lives. In reality, her husband James (Eddie Marsan) has such deep-rooted insecurities that he systematically abuses Hannah sexually and in other violent ways. This is the part of Hannah's life that she hides from everyone - that is until one day she appears with a black eye and shortly afterwards with two black eyes.

In trying to escape his own demons, Joseph runs by chance into Hannah's shop where their unarticulated neediness establishes a common-bond. As the story develops, there are an number of interesting side plots that add depth and colour to Joseph's back and white world. He is driven by a sense of duty, the need to exact retribution and guilt-inducing remorse because things might have been different. The one time he does manage self-restraint sees events turn horribly wrong for a neighbours son which only adds to Joseph's feelings of guilt.

This film is deftly Directed by Paddy Considine making his feature-length debut - he also wrote the screenplay. It is based on and developed from his earlier BAFTA winning short film Dog Altogether (2007). Considine is an established actor (Hot Fuzz, Bourne Ultimatum, Submarine) but there are sure to be more films coming from him as Director. This film is never predictable and has many twists and turns that unfold naturally. The characters are so real with both Mullan and Colman turning in stunning performances - particularly Colman. This film flopped at the box office - probably because of it's gritty subject-matter and 18 Certification. It comes out on Disc on Monday 6 February - I shall be adding it to my collection.

I saw this in a sell-out at The Prince Charles Cinema off London's Leicester Square last night and there was a short Q&A with Considine and Colman afterwards. After one or two good opening questions it turned into a love-in for the film industry darlings and ended with a scathing attack on the government's proposals for funding film production in the UK. This was the only disappointing aspect of the evening.

Well done Prince Charles for staging the event, well done Paddy Considine for conceiving and bringing to fruition such a rich, engaging and stimulatingly well told story and thanks to Olivia Colman (Mrs Vicarage in Rev on UK TV) for her sensitive portrayal of a victim of domestic and sexual abuse.

As I said, this is not for the faint-hearted but if you have a strong constitution and like engaging social drama with first class acting and direction - this is a must-see film. I'll give it 8/10.

Posted by Duncan Strathie at 09:21 No comments: