This is a slick film. Arminianism takes on Calvinism head-on in a postmodern roller coaster of an action movie. Wow! Go see it.
Here's one for the guys. If you thought that the longer and harder you kissed Emily Blunt the greater the chance of a perfect future for you and her together, would you give it a try? Well, I'm not going to spoil the outcome, but there is an interesting twist at the end.
For me, the premise of the story is based on Psalm 139:16:
Your eyes saw my unformed body;
all the days ordained for me were written in your book
before one of them came to be.
That is, 'The Chairman' (Him upstairs) writes the plan for everyone in a series of books and his minions, whom some call angels, intervene to ensure things are kept on track to give the best outcome for humanity. The whole thing pivots on the idea of an interventionist God and the free-will/predestination debate and is a wonderful theological exploration of cause and effect based on a short story by Philip K Dick (Blade Runner).
The minions move around the space-time substrate of Manhattan by going through doors that enable them to jump from one place to another. The key to making it work is the hat! Next time you are out walking and someone wearing a hat passes you by - beware!
This is also a love story - a predestined love story. It also includes an angel motivated by guilt who breaks the rules. It is commendable for being a contemporary action film that has minimal violence and as far as I can remember no weapons!
Matt Damon stars as the action-hero as he chases after Emily Blunt time and time again. He tests her patience to beyond breaking point but in the land of Disney - well, I'll leave you to discover if there is a happy ending or not. Emily Blunt plays the archetypal attractive girl but delivers more than that in a strong performance with some top class dancing. There is more than a hint of Men in Black lurking in the visuals and conceptualisation too.
This is well worth seeing. I can now add the Empire Newcastle to my list of cinemas. I commend this film to you. I'll give it 8/10.
Posted by Duncan Strathie at 20:57 No comments: 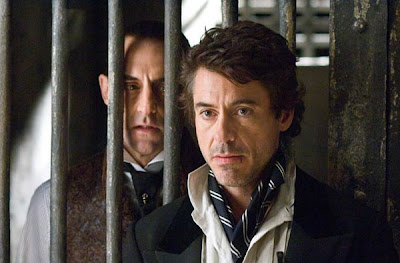 I know I oscillate between seeing some films on the day of release and then catching up with others a year after release, but this one has escaped me first time around. I've been on holiday and then on the road solidly for 4 weeks - sad boy, no movies!

This is an engaging film - on whatever level you wish to watch it - unless of course you are looking for something that pays homage to Basil Rathbone! This is an in-your-face postmodern update of the the Victorian sleuth using Matrix-style cinematography, a wonderful soundtrack and the portrayal of Holmes as an action hero with serious issues.

The acting performances are all strong but Downey Jr. dominates by a long way. His physical presence, his experimentation with mind-bending substances, his bare-knuckle fighting, his inability to sensitively articulate his emotions and his immense intellect combine to produce a mesmerising character. There are periods of prolonged and brutal violence. As unwelcome as they are, they are an integral part of the contradiction that this Sherlock Holmes is. Loathed but needed in equal measure by every character in the film, he stumbles his way through sheer genius and hapless coincidence fighting a foe who is only revealed at the end - thus the scene is set for the next in the franchise.

I was fortunate enough to watch this on Blu-ray disc and I must say that it was visually stunning. The lighting and colour palette combine to give a compelling depth of characterisation of Victorian London and the Thames-side wharves and docks. In one scene of a series of monumentally vivid explosions where fireball after fireball erupt in stunning vibrancy, the sound is almost non-existent as the full force of what you witness is perfectly well transmitted by visual means. This heightens the impact and is a most clever Directorial device - well done Guy Ritchie.

Where the story does deviate from the norm is that it features a separate love-interest for both Holmes and Watson. Both girls give good performances against lead pair. At the conclusion one is betrothed and one in handcuffs - plenty of scope for development in Sherlock Holmes 2 which is already in the can and which also features Noomi Rapace (Millennium Trilogy).

There is little by way of morality to explore in the main story-line - it is incidental to the plot as Holmes confronts the first potential WMD. What does make this film endearing is Watson's addiction to gambling and also to Holmes and Holmes use of reasoning to reveal the only possible solution. The film does tend to go a bit too long and could happily lose 20 minutes. There is also homage paid to gothic horror and at times the script does sound like something set in Hogwarts.

This film is well worth watching - a visual feat if you don't mind the violence that runs throughout. I'll give it 7.5/10.
Posted by Duncan Strathie at 20:13 No comments: