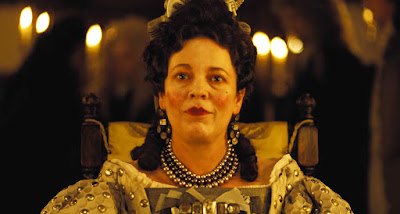 I'm not sure what I was expecting but I wasn't expecting this eccentric, oddball and strangely comedic exploration of part of the life of Queen Anne and her court in the early Nineteenth century. England is at war with France and the English armies are led by Lord Salisbury (Mark Gatiss). Lady Sarah Marlborough (Rachel Weisz) abuses her position as the Queen's confidant and lover, to control the Queen through reinforcing her lack of self-worth and playing on her ailing health.

The life of court is characterised by duck racing, pineapple eating, a naked MP being pelted with pomegranates, formal dinners and constant squabbling between the government and opposition. Life at Hampton Court Palace carries on seemingly unaffected by the country's impending bankruptcy, the threat of defeat to the French and the indulgence of egos as courtiers jockey for places of influence. Two hundred years on and it all sounds depressingly familiar!

Here we have a film where the three lead characters are female - and none of them come out of it having ingratiated themselves with the audience! However, the strength of their performances are worthy of the accolades and awards already received and I'm sure that they will collect more as the awards season rolls on.

The arrival of Sarah's cousin, Abigail (Emma Stone) is the catalyst for a battle to see which of them will triumph as the Queen's favourite. The depths to which they are prepared to descend to achieve their goal are staggering. The lies, deceit, opportunism and lust for power which characterises this menage-a-trois is consistent with the gluttony and depravity that appears to have entrapped all of the characters in this film. I'm so glad I'm living in these times - not from any sense of evolved superiority or sophistication, but simply because I don't think I could have coped!

The film portrays an ongoing preoccupation with sex but virtually no real intimacy. The scenes with  Lady Sarah in a brothel are menacingly disturbing. The irrational and petulant behaviour of the Queen for me became cumulatively tedious. The never ending resolve of Lady Abigail to be seen as the caring and selfless servant whilst deceitfully scheming and plotting her adversaries downfall was unpleasant.

Did I enjoy this film? No. Am I glad I saw it? Yes. Do I want to see it again? No. It is in many ways a strange film that provoked, and still provokes, strange reactions. It's structure and the way it was shot is different - perhaps intended to be an attempt to guess how they would have made feature films 200 years ago. If you stay to watch the credits, they will drive you wild too! I really am at a loss to give this film a rating. For the acting a 9/10. For how it's left me feeling, perhaps a 3/10 is being generous!

Posted by Duncan Strathie at 16:25 No comments: 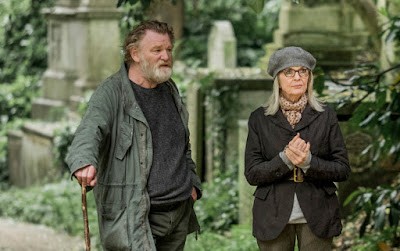 This is a film about denial, anger, loss, collusion, regret, hope, love, compromise and principles! It is a heart-warming story and although the narrative arc is predictable, the warmth of the characters draws you in and I for one, was happy to collude.

The developing love story is the unifying thread that runs throughout this film, but there is a lot more here if we peel back some of the layers. To begin with, although this film is based on a real life tussle over squatter's rights by Harry Hallowes on Hampstead Heath, it is not a documentary or biopic - it's a drama.

Would the story have worked as well anywhere else in London, say Bethnal Green, Hounslow or Croydon? No. The caché of Hampstead is an important part of the story and the pretentious lives of the characters in this film present a certain willing collusion with a desire to be part of the Hampstead set. That is what makes Fiona (Lesley Manville) and her gang appear to be only interested in seeing to be doing the right things and protecting everybody's 'best interests'.

As Emily (Diane Keaton) begins to rediscover her own identity a year after her husband's death, she is conflicted about which parts of the Hampstead lifestyle to buy into and which parts are not really her. Meanwhile the external pressures of her looming insolvency, the constant nagging of her son Philip (James Norton), the unwanted advances of her accountant James (Jason Watkins), the neighbourly intrusions of Fiona and the growing attraction of the recalcitrant, volatile and wounded rogue Donald (Brendan Gleeson) pull her in competing directions.

The way the story is told maintains the different tensions creatively and there are some wonderfully comedic moments. Diane Keaton seems an odd casting choice - perhaps to give appeal to the North American market. Brendan Gleeson however inhabits the role with such comfort, you wonder if he wouldn't mind becoming Harry Hallowes - but moving to the Galway coast!

This is a gentle film that offers many avenues for reflection and exploration. the characters are believable and deliver their comedic inter-play with accomplishment. I think this is the first time I've seen Lesley Manville playing an unlikable character and I didn't like it! This is a perfect film for an evening in with the flames flickering in the hearth and a warm glow spreading throughout the audience. I'll give it 7/10.

Posted by Duncan Strathie at 15:26 No comments: