This film is based on the 1985 novel of the same name by Orson Scott Card. I haven't read the book, but the film seems to me to be an almost endless pastiche of images, ideas and dialogue from a long stream of near future, we're under alien attack threat movies that have been around since the 1950s. As Kermode would say it's highly derivative. It is a cowboy film set in in space - part of that trope of films that fall within the American post-WWII need of a redemptive and sacrificial saviour figure. Now, that reminds me of another story I've read somewhere.

The opening words of the film from the character Ender Wiggin (Asa Butterfield) set out the entire plot and narrative arc so not very much of what you see is surprising:


"Fifty years ago an alien force known as the Formics attacked Earth. Tens of millions died. It was only through the sacrifice of our greatest commander that we avoided total annihilation. We've been preparing for them to come back ever since. The International Fleet decided that the world's smartest children are the planet's best hope. Raised on war games, their decisions are intuitive, decisive, fearless. I am one of those recruits."

The characters in this film show little development and the pace little variation. The dialogue is at times clunky as it explains points of the story to the audience - just in case they are not keeping up. To have two such heavyweights as Harrison Ford and Sir Ben Kingsley seemed  a disproportionate use of Hollywood A-listers given the feel of the film with most of the cast being teenagers. However, where this film does excel in in its use of CGI which are top notch and seamlessly integrate into the real world. I watched this on Blu-ray and the picture quality was stunning.

What makes watching this film worthwhile are the number of moral and ethical issues it explores some of which are:


I thought the ending of the film was clever and held out the prospect of a sequel if it was thought the franchise would be up for it - but the film has to date only recovered slightly more than half its $110m production cost so that seems unlikely. If this film comes around on TV you might want to give it a watch but not one for rushing out to buy the disc. I'll give it 6/10.

The Sound of my Voice takes over!

I started this blog because I am fascinated by the interaction of my story with the story on the screen and also God's story. I find it fruitful ground for reflection and a good way to get into a wide range of important issues. Thanks to everyone who has taken the time and trouble to look at things on here. I hope they have been helpful.

We are approaching 200K page hits (not sure how this is recorded or how accurate it is) and today sees a new leader in terms of the review with the most viewings. My review of Spirited Away was posted more than four years ago and raced to the number one spot quickly and has been there ever since. However, with just over two years on the blog, my review of Sound of my Voice has overtaken it today boasting 14196 page views.

I often look at the statistics and see that they fall into a broadly consistent pattern. There are of course variations - when a new film is reviewed, or a release on disc happens these cause a blip in the figures. What often causes me consternation is when I view the 'now' statistics, or even sometimes the 'day' stats with up to 10 reviews being looked at see some really odd titles appearing. Every now and again there will be perhaps 15 hits in a single day for an obscure title. I wonder if these might come up in Film Studies classes? Some titles are persistent but low scorers such as


and how can such an awful film like Apollo 18 feature in the top 10? Why is The Girl who Played with Fire not in the top 10 when the other 2 Millennium films are? Why are the three most viewed so far ahead of the rest?

For those who are interested in the stats, here they are from today. 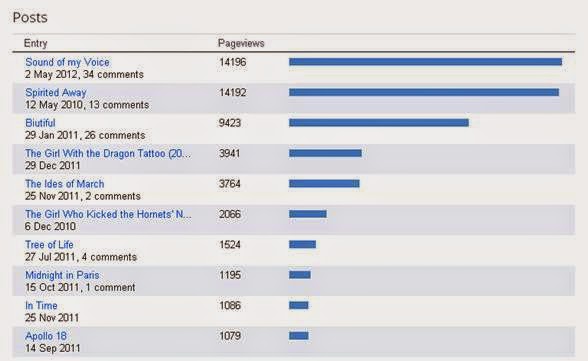 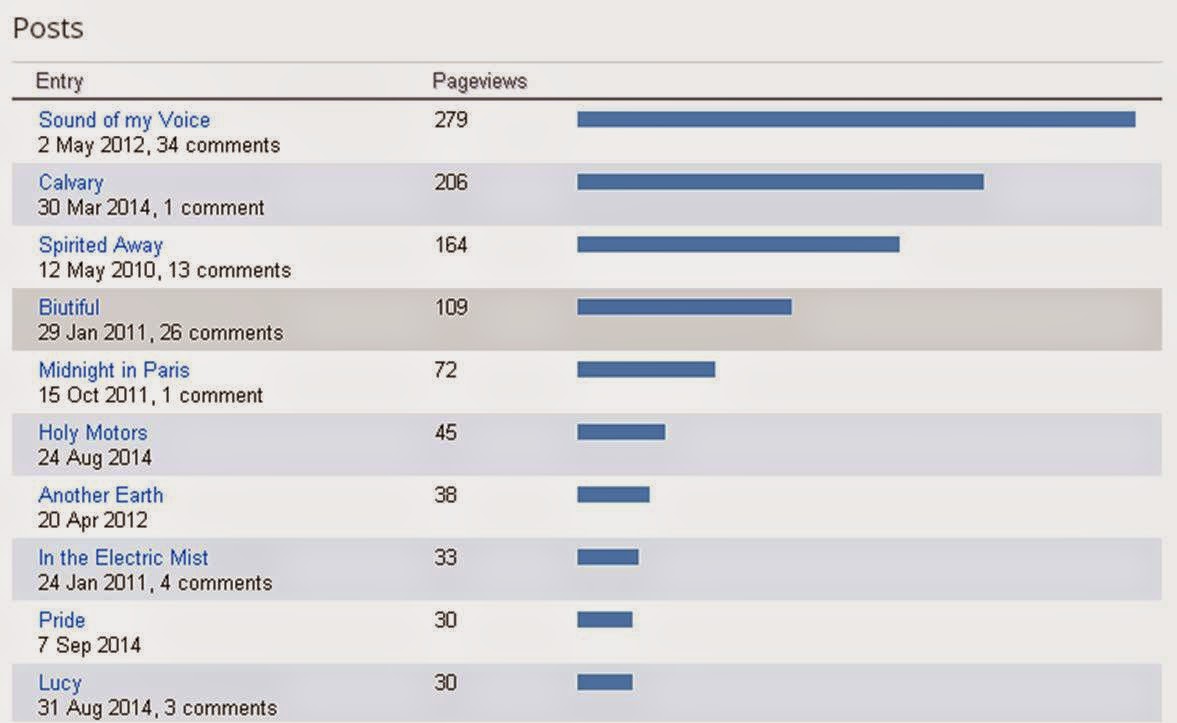 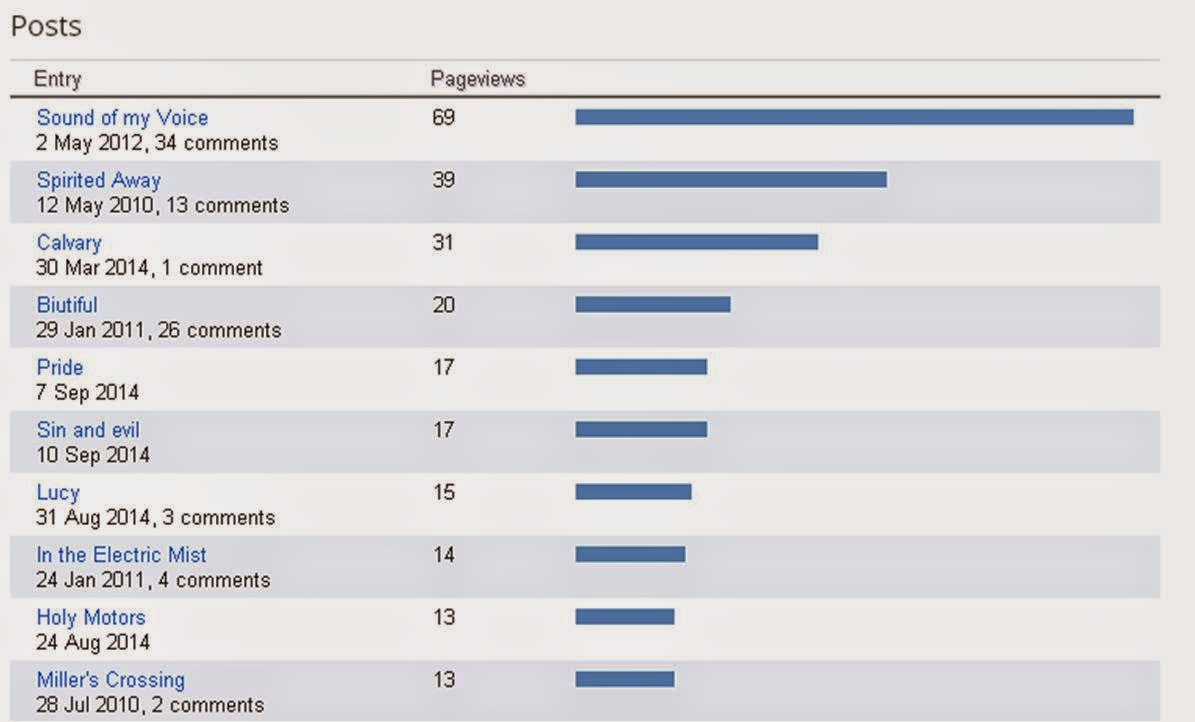 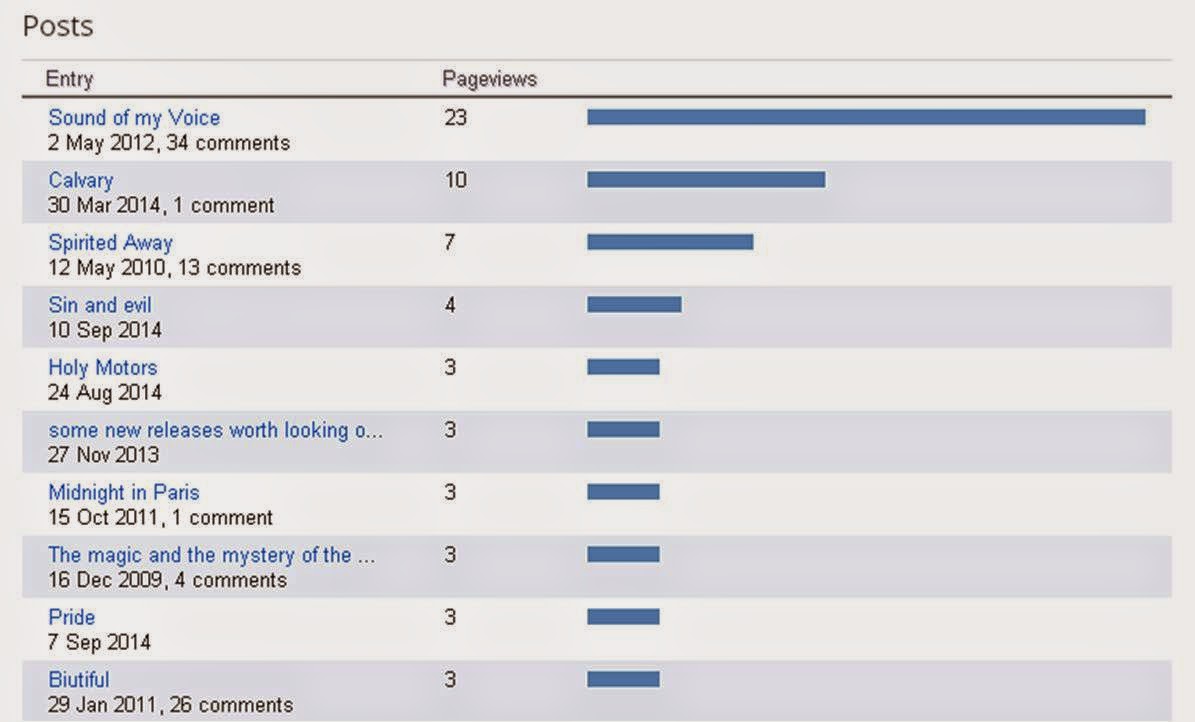 I guess it is to be expected that, in general, the most viewed reviews also attract the largest number of comments. Many of the comments are very helpful and bring new insights and understanding. Please keep them coming - and please keep checking back here for new reviews.

Many thanks to all my readers.

There wasn't much showing for viewing 'now' category when I originally wrote this post - but this morning is another story and demonstrates the eclectic web browsing habits of the blogosphere. Have a look at this: 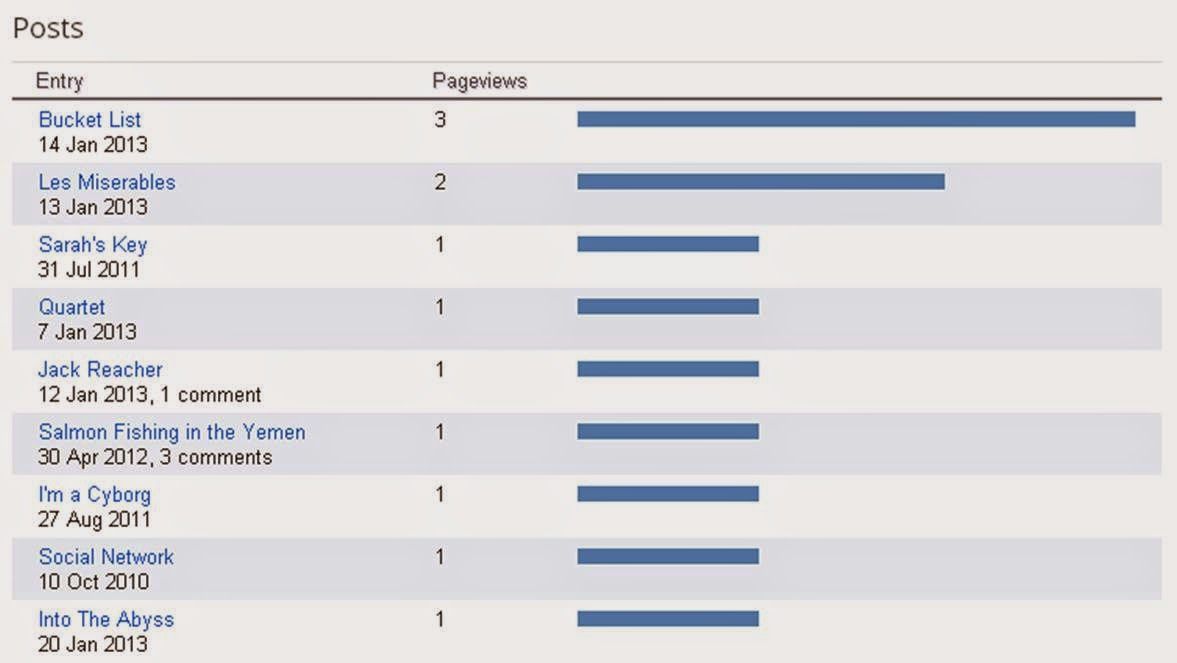 I have noticed a couple of interesting tag lines on a movie poster and a trailer for a new series.

The SyFy Channel is trailing the launch of the second series of Defiance in which the character Stahma says “The most we can hope for, is what we want, is worth the evil we do.” Discuss. 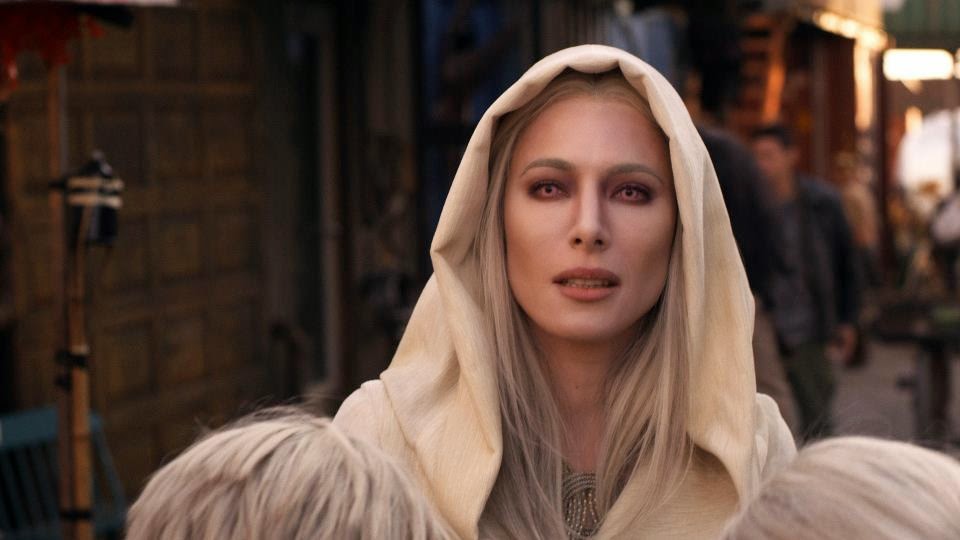 I also noticed a line on a poster advertising Sin City 2 A Dame to Kill For. 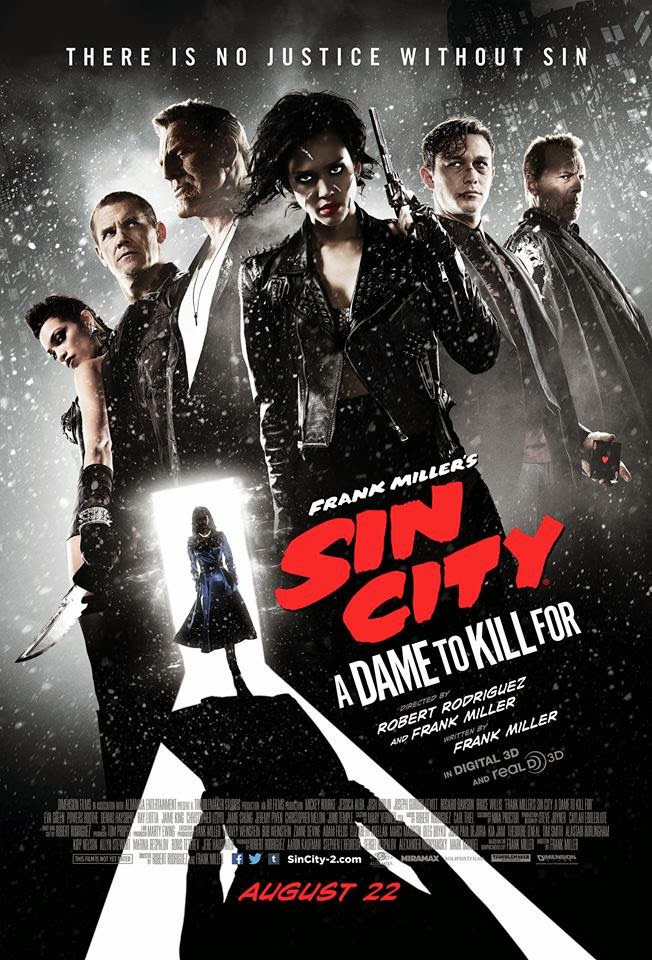 "There is no justice without sin." Discuss. An interesting proposition. Had it said 'forgiveness' that would be have been a fairly easy point to argue but 'justice' is an interesting variation.

Film has often traded using spiritual language but I sense that the level of engagement is deepening and quickening. People are increasingly hungry for engagement with spiritual things. We live in times where people have a great spiritual hunger. It's good that we have a story that speaks to their hunger which counters evil and strives for justice - where sin is forgiven.

Posted by Duncan Strathie at 21:53 No comments: This is an important film. Please go and see it.

This film could so easily have been something else. It could have been schmaltzy and sentimental, it could have descended into a patronising lecture on collective socialism, it could have glorified/vilified Margaret Thatcher or Arthur Scargill, it could have portrayed the lesbian and gay scene very differently. Instead we get a film about 'humanity' in many of its wonderful manifestations.

For those who didn't live through the era in which the film is set (1984/5) it will be hard to understand the darkness and seeming pointlessness of a year long battle between two sides with diametrically opposed political philosophies. We live today with the consequences of the outcome of that battle.

The way in which this story is told and the warmth and quality of the acting and direction combine to deliver a film that has you laughing at one moment and crying the next. Whatever your predisposition may be, you will feel differently about striking miners and gays and lesbians by the time you reach the end of this film. What this film does so effectively is expose prejudice which is always blind. It also charts how people who are open to exploring truth can undergo the most amazing journey of personal growth and transformation. This is a film about maintaining personal integrity in the face of seemingly overwhelming odds.

This is also a film about friendship, a sense of a shared struggle and solidarity to overcome injustice. The soundtrack is an amazing blend of protest (Pete Seeger and Billy Bragg), celebration (Shirley and Company, Dead or Alive) and iconic gay and lesbian (Queen, Bronski Beat and Frankie Goes to Hollywood) songs.

The film portrays the painful struggle of 'coming out' with great sensitivity. It also treats the fear engendered by HIV/AIDS in a way that we have collectively lost touch with in our more accommodating age with our antiretroviral therapies and anxiety over Avian Flu and Ebola.

It would be almost unfair to single out any acting performances - but I'm going to say Bill Nighy, Paddy Considine, Imelda Staunton, George MacKay and Ben Schnetzer all shine in a brightly lit universe. Please do go and see this film - prepare your tissues and prepare to be challenged. You will be glad you did as this is ultimately an uplifting film. I thought it was brilliant and I'm giving it 9/10!

Posted by Duncan Strathie at 15:42 No comments: