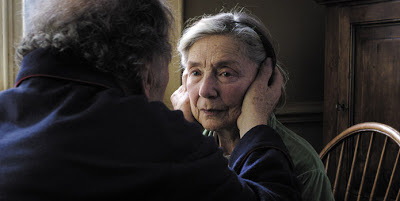 Director Michael Haneke (Hidden [Cache] and White Ribbon) won the Palme D'Or at Cannes this year with this unusual and engaging film. The film features Georges and Anne, two retired music teachers living out their retirement in an a Parisian apartment. They are devoted to each other and their life together is filled with the good things that engage the senses - and of course outings to the Conservatoire. All is going well in their retirement - until Anne suffers a stroke.

In one respect the story goes steadily downhill from there and those who demand a happy end to a film will not find it here - or will they get something more fulfilling and satisfying that trades in a currency of greater worth than happiness? There are many films on offer that explore themes of ageing (Being Schmidt, Hope Springs, Best Exotic Marigold Hotel) and quite a few that explore death. Amour explores both of these but not quite in a way that I've seen done before.

One of the early scenes shows Georges and Anne attending a recital by one of Anne's proteges. The remainder of the film is restricted to their apartment. This gives a confining feel but the viewer is left to decide if they feel it is a confinement of imprisonment or a confinement that offers protection as it protects Anne from the world, neighbours and at one point even family.

The story - and by revealing it I'm not really spoiling anything as this film is not so much about the route travelled as the way in which the journey is shared - is one of a journey of loving companionship and total devotion. It is a story of service, of dedication and of selflessness when love is asked to make the ultimate sacrifice. It is a journey filled with respect and meaning that sets itself in stark contrast to the comparatively frivolous and narcissistic journeys of those lives that insect with George and Anne - including their daughter Eva.

The acting in this film is top class with Jean-Louis Trintignant as Georges and Anne played by Emmanuelle Riva with both of them into their 80's in real life. Their understanding, their daily routine, their unquestioning love for one another and their music all weave together to produce a film with qualities of enchanting magic. The coming and going of the concierge and his wife, the nurses they employ to care for Anne, their daughter Eva and protege Alexandre all serve as unwelcome interruptions to the daily routine of Georges caring for Anne.

The way Haneke sets out the story shows death to be a solitary and lonely experience. There is no room for empathy as no-one really knows how Georges feels except those things he reveals through his loving actions. This is a film about existential being connecting with something beyond. It is a film that invites the viewer to ask many questions and ponder how their final years might pan out. It presents the challenges of daily hygiene and the simple tasks of getting dressed and eating that confront someone with increasing paralysis. Haneke offers a menu rich with a wide variety of emotions which play out against Georges' resigned air of loving pragmatism. For me there was a constant tension between emotional engagement and Haneke's detached and clinical style of almost documentary-like observational film-making.

If Anne's trajectory has an air of inevitability about it, the way the film ends has anything but. Georges' act of ultimate selflessness manifests itself with little warning - but how long was he thinking about it, how premeditated was it? What is the significance of the pigeon - is it that it is a living being that has the choice of freedom and an independent life? Going on the way he caught it, presumably Georges didn't originally intend to release it. The viewer is then left to ponder the fate of Georges. I know what I think he did. What's your guess?

This film transcends reality and forces an engagement at a profound level with a possible future that may befall many viewers. It is not, in that sense, comfortable viewing. What is reassuring is the depth of love and devotion that Anne and Georges' common life together embodies. It is in holding out this hope that the film transcends an inevitably depressing conclusion and offers the viewer the chance to move beyond to a higher place - an almost spiritual place. This is not an easy watch but it is immensely rewarding and oddly hopeful. If you can muster the courage you will not be disappointed. I'll give it 8.5/10.

Posted by Duncan Strathie at 20:22 No comments: 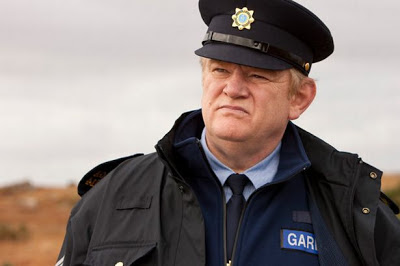 I imagine for most people that this is a Marmite film - you'll either love it or hate it. It's a comedy and part of its humour comes from the fact that movie is a pastiche of every kind of small-town cop goes big-time drug gang buster you can imagine. The humour is driven by Brendan Gleeson playing Irish Garda (Police) Sergeant Gerry Boyle who is first class. His character is in so many ways very stereotypical - in an Irish sense, in a police officer sense and in a small town yokel sense.

It is the warmth of Gleeson's character that is the draw. The straight guy is Don Cheadle who plays an FBI drug enforcer and thereby facilitates the playing of the racist card as yet another avenue of stereotyping to be exploited. Add to this prostitutes brought in from Dublin, Eastern Europeans marrying for the visa, a gay man marrying for respectability and police officers on the make and the stereotyping elements of the plot just keep multiplying. It even ends with the characters asking each other if the story had a happy ending!

The film is written by, and a Directorial debut from, John Michael McDonagh who delivers a beautifully shot and lit film. The lanscape is at times bleak and boggy, the coastline dramatic and poetic. The characters have depth if you are prepared to look and work with them and there are plenty of laughs - and profanity! The film offers a saviour-figure whom I found to be at the same time both totally predictable but also continually surprising.

This film offers a good series of laughs and in an almost reverse way is a good promotional film for West rural Ireland. Gleeson is great and at 92 minutes the film is well-paced and not overly long. An enjoyable film that's well worth a look. I'll give it 7.5/10.

Posted by Duncan Strathie at 09:48 No comments: