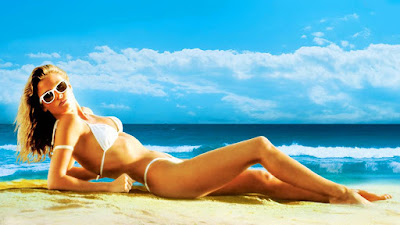 This is an 80's road trip movie about university students trying to find sex and love, directed by Rob Reiner. In a way it is a perfect dress rehearsal for When Harry met Sally which he directed five years later. The characters are engaging, the story whilst predictable, is easily subsumed in a drama that explores teenage relational angst in a way that is well thought through and which delivers a worthwhile and funny film - all without a sex scene between the main characters!

The lead character is Walter (Gib) Gibson played by a 16 year-old John Cusack who at a High School graduation party confides in his best friend Lance (Anthony Edwards) that he has lost his mojo with 'women' after failing to score using a number of cheesy chat-up lines. Lance tells him that he should  go to university with him in California where the sun alway shines and the beaches are filled with hot girls (see pic above), rather going to the cold and dour north-east to study. University begins and they go their separate ways.

Although there isn't much of a narrative arc that you won't see coming, I'll refrain from describing any plot details just in case you want to dig out this tribute to 1980's youth culture. Rather than steamy shower scenes and sleazy clumsy sex, this film explores the male desire for the physical and the female desire for the emotional in a way that requires a journey of 6000 miles, fights and jealousy to reach a consensus.

For me, it was only after having shared the common experience of the journey, it's initial destination, the disappointment it offered and then the realisation that opposites do attract, that the film delivers its own satisfying climax. In an age where everything is instant - especially gratification, this film is an amusing and entertaining reminder that things worth pursuing can take time to build and that if they are built well can last a long time.

This is true of so many things in life. I remember my own impatience in my teens and twenties - I wanted it all and I wanted it all now. A life time later, the journey that I have travelled gives me a different perspective and I am so thankful for what I have - not what I wanted! It is so hard telling someone who simply wants the destination that it's actually about the getting there that is important. As much as parents may wish to live their children's' lives for them, we have to muster the courage to let them go and find their own way, hoping and praying that the values we instilled into them during their upbringing and which our family espouses, will give them enough to safely navigate by.

This is a worthy film - even if the decades now make it a little cheesy (great soundtrack though!). John Cusack and Daphne Zuniga deliver strong performances in the lead roles. The film beautifully characterises the contrast between New England and California with the illusion of The Sure Thing framed on the beach under warm Californian skies and chilly and snowy Ithaca actually delivering something beautiful that is of lasting and fulfilling quality. I'll give it 7/10.

Posted by Duncan Strathie at 09:08 No comments:

This film made me laugh and it made me cry! I managed to get a couple of free tickets to what turned out to be a Marks & Spencer screening - presumably for employees as the cinema was packed and the majority of the audience were under 10 and had no idea that there might any etiquette involved in attending cinema. Such was the power of this engaging tale, that for the most part I was oblivious to the screaming, running about and hysteria that went on around me for the whole of the 103 minutes run time. I was only aware of my surroundings on less than half a dozen occasions. I can't remember the last time a film engrossed me so much - or perhaps it was because of my surroundings that I chose to become so engrossed?

You know a film should be good when the ensemble cast includes Ben Wishaw, Hugh Bonneville, Sally Hawkins, Brendan Gleeson, Tom Conti, Julie Walters, Jim Broadbent, Peter Capaldi, Imelda Staunton, Michael Gambon, Joanna Lumley and Hugh Grant to name but a few! Such is the quality of CGI animation these days that not only do the CGI characters look believably life-like, but the way they physically interact with the rest of the cast looks completely natural. Well done Framestore (a British Company) for the animations and digital effects.

I am not a fan of slap-stick comedy but this film had me laughing - a lot. The script is very cleverly done and the visual gags are beautifully executed. As long as you remember that the world in which Paddington lives is a fantasy, there is no problem about a bear riding on the footplate of a refuse truck, sitting astride and racing on an Irish Wolfhound or him using toffee apples to stick to the ceiling allowing him to walk upside down!

As with any good children's story, there is plenty for adults to reflect on if they choose to peel back the layers. There are many weighty themes in this film such as fulfilling aspirations, generosity, family, community, looking for the good in people, guilt, transformation, injustice, forgiveness, redemption, salvation and hope. All of these inter-weave to combine in a film that offers much for reflection and which presents Paddington as a type of Christ figure if you choose to see him that way. Or you can simply sit back, enjoy the film and have a good laugh - and cry.

As you will have gathered, I liked it a lot and will award it 8/10.