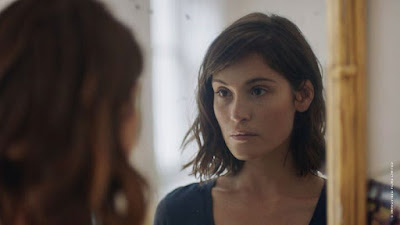 I found this a hard, almost disturbing film to watch. It is intelligently written and exquisitely acted. To be honest I'm still not sure what to make of all of it.

The film is about an all too common suburban malaise that afflicts too many couples. The challenge to be seen to be successful - a good job, stay at home mum, detached house in the Kentish suburbs, two cars, two kids. They have it all but life is all about work and providing for his family for husband Mark (Dominic Cooper) and for wife Tara (Gemma Arterton) life has lost its purpose and she has lost her sense of self and is depressed. The problem is that Mark is unable to see this and offer any empathy or compassion. His sex drive results at least a once-a-day uncontested rape of his wife. Her inability to articulate clearly how she feels - or more properly is unable to feel any more, simply feeds into the cycle of mismatched expectations about what life is about and how it should be lived. There is minimal dialogue, the story is driven by facial expressions, tears and body language. The film slowly and painfully trundles towards a breakdown in the marriage until Tara finally makes her escape.

With extensive use of hand held cameras, it felt that perhaps 50% of the film featured a close up of Arterton's beautiful face. She spends a lot of time looking at her emotionless reflection. Her mother is unsympathetic and unable to offer any support other than to say that it was just a 'phase' and that everyone faces it at some point or another. Tara clearly feels that she has no opportunity for creative output or self-expression and tries to find solace in an art class but Mark is dismissive. Tara struggles to find a way out of the trap of the daily, meaningless grind - she has even lost her love for her children.

In an attempt to find herself, she escapes. Her new found freedom even produces the odd smile on Arterton's otherwise emotionless face. She hooks up with a Mark look-a-like which ends up in bed. She then chastises her new partner for lying about being married and a father - the very thing she has done to him. A bewildering double standard. The ending of the film is suggestive but ultimately leaves the story open. For me this was an unsatisfying conclusion.

The film cries out for blame to be apportioned but both Mark and Tara are so unable to analyse what is actually going on, it is difficult to blame one more than the other. I wonder if, in general, men who watch this film would see a different film to women who watch it? I don't know if this film has a feminist agenda driving it to present Tara as a victim. We never get to see Mark's daily context - perhaps he is numbingly bored at work and simply goes through the motions each day to provide for his family or possibly he works so extremely hard he has little capacity to engage in a fuller home life.

Overall, I found the narrative a painful thing to experience - I didn't want to engage with it. That in itself shows what good story-telling this film offers. Arterton's acting is mesmerising and shows the versatility that she possesses. I'm really not sure what score to give this film. It is an excellent film with Arterton giving an extremely strong performance - but I didn't enjoy it all and I certainly don't want to see it again. Perhaps the film's intent is to vaccinate suburbia in the hope of preventing an epidemic. It offers plenty of scope for fruitful reflection and perhaps offers couples a jolt back to reality should their relationship be heading in the direction of Mark and Tara's. I'll give it a 7/10.

Posted by Duncan Strathie at 17:07 No comments:

Context is everything! This film was made in 2007 in New York in the wake of 9/11. It could have been set anywhere in the USA as far as the story of the central character Walter (Richard Jenkins) is concerned but it has a wider story to tell about cross-cultural communication and understanding, the ability to find shared interests, love, the brutality of an indiscriminating immigration regime and that is why it really did have to be set in New York.

The film gently reveals a number of epiphanies - mostly experienced by Walter. In late middle age, the university professor is still in the funk caused by the death of his wife five years previously. He looks like a man on auto-pilot with no real purpose in life. Walter is coasting and deceives himself and others through half truths. He is unnecessarily harsh on one of his students, his lectures are lifeless and lack-lustre, there is no spark, no creativity, no fun in the man or his life.

Walter is jolted out of his numbing complacency by being forced to visit New York - a city where he just happens to keep an apartment. A series of events present him with people he begins to care about, activities that he can get passionate about and the faint hope that he can find love again is rekindled. This is a film about transformation, xenophobia, the workings of a faceless and authoritative institution, the global village, love and families.

The film is littered with rich metaphors that help to signpost what is going on. Not in a 'show and tell' kind of way but with gentle subtlety. The subway, the community in Central Park, the windowless detention centre, the uncaring and over-officious staff and the non-sexual intimacy which can bring consolation are all offered to help the film tell its tale.

The acting in this film, especially from the four main characters, is impeccable. The way in which Walter's world, at least for part of the film, is darkened and shadowy reinforces his dour and morose lethargy. His search for a creative outlet to enable him to somehow reconnect with his wife leads initially to sadness and frustration that seemingly further distances Walter from his wife and his memories of her. The fact that Walter is now almost always accompanied by a glass of red wine shows us the new partner in whom he finds solace.

Great script, Directing and acting - little wonder that Jenkins was Oscar nominated in this role. The playful way in which Tarek (Haaz Sleiman) describes himself as a bad muslim because he drinks wine and his partner Zainab (Danai Gurira) as a good muslim because she doesn't debunks and normalises any basis for fear of muslims - they are, per se, simply ordinary people like you and me. This is a gently bold film and its message is even more relevant today than it was in 2007 in the aftermath of 9/11. Do try and get hold of the disc or stream it. You won't be disappointed. I'll give it 8/10.

Posted by Duncan Strathie at 06:48 No comments: