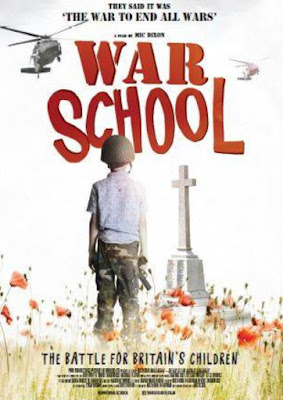 We screened this film in our parish church. It was introduced by Ellis Brooks from Quaker Peace and Social Witness and the Director of this film, Mic Dixon, joined him for a Q&A session afterwards. A year ago we screened Shadow World, a film about the global arms trade and this was intended to be a follow up.

The film explores the relentless targeting of school children in the UK by military recruiters as a means of sowing a seed that they hope will bear the fruit of someone joining the armed forces. Careers visits into schools, displays at county fairs, reenactment activities and military displays all seek to excite youngsters about the possibility of flying a jet, driving a tank, piloting a submarine or simply firing a gun.

The film does not present a straightforward documentary. It begins at the Cenotaph on remembrance Day with all it's ceremony and marching. This gets twisted in a brave challenging of the received status quo. The film's viewpoint is elevated as the story unfolds from veterans who have been there and done that - and found it to be ultimately empty and painful in their experience. Former service personnel suffering from PTSD, coming to terms with injuries and suffering flashbacks of horrific events sometimes decades in the past, narrate this exposé of Britain's military recruiters. the film does include some graphic scenes of warfare from WWI through to present day day.

Peace campaigners and pacifists will of course latch on to this film as an important way to spread the message. In the Q&A session afterwards it was stated that the term 'just war' is an oxymoron. It was also stated that we should have a military only for defending our own soil and not for overseas intervention. Nothing was said about how this military was to be recruited and trained.

The film's message was thrown into razor sharpness for me the following day. Long ago I had agreed to lead a service to commemorate a local man who had died in the Gallipoli Campaign on the day of the service 104 years ago. Six other local men had fought at Gallipoli and died and these were also remembered. There were members of the Royal British Legion, the RNLI, the Warwickshire Regiment and the Gallipoli Association. More people attended the service than had been at the film the previous evening. Those at the service included the great grandchildren of one of the war dead.

In addition to choosing the liturgy and hymns, I had to deliver a sermon and the intercessions. I found this particularly challenging, especially in the light of having seen War School in the same place only hours before. I had written the sermon before I saw the film and was happy that I did not need to revise it as a consequence. I had forgotten to bring the prayers with me so I had to extemporise the intercessions which was an extremely difficult task. Incorporating theological reflection on the hoof without compromising the integrity of either group, or myself, was a struggle. These things are not straightforward.

Attending the service were two serving members of the Mercian Regiment. Their job? Going into schools and careers fairs to line up potential recruits!

Info on Quaker Peace and Social Witness can be found here. The War School website is here.

I'm glad we showed the film but I need to do some more reflection and work to reconcile the two experiences.
Posted by Duncan Strathie at 15:27 No comments: