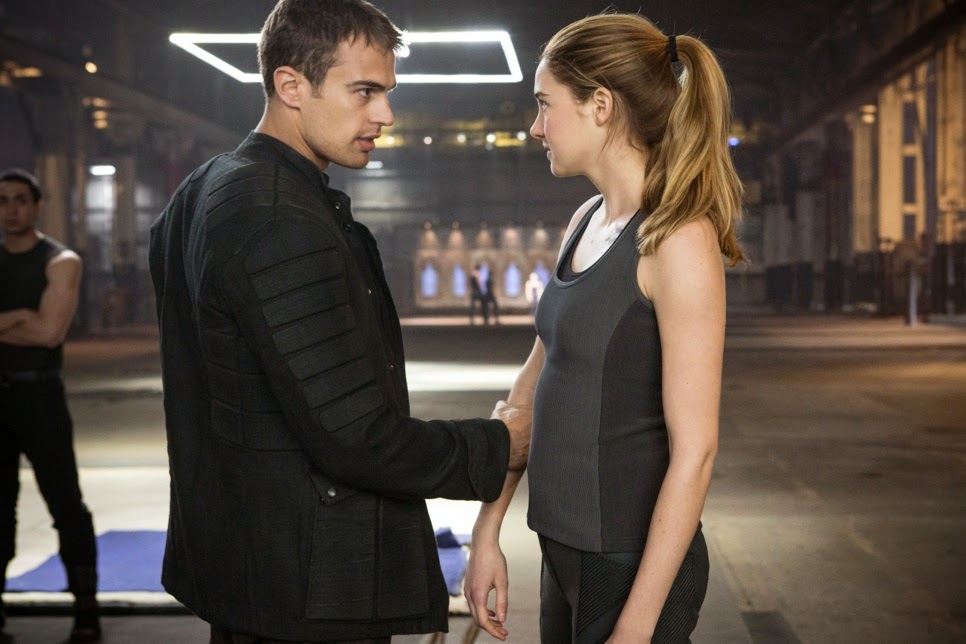 I hadn't read Veronica Roth's novel but was told it was a very good story - the sort of thing I would enjoy. I did find it enjoyable - but at the same time the film has some flaws. The plot is a kind of Enneagram meets Hunger Games meets Inception fusion that presents us with another strong female teenage character that excites the moral imagination as they battle the pressure to conform.

Instead of Katniss Everdeen we have Tris Prior (Shailene Woodley) who is branded a 'Divergent' - someone who doesn't fit into any of the five factions. The factions were created after the war a hundred years previously to bring order to the society of dystopian Chicago. They are Abnegation (selfless), Amity (peaceful), Candor (truthful), Erudite (intelligent) and Dauntless (brave) - a resonance with the Houses in Harry Potter?

All 16 year olds are required to undergo a serum enhanced aptitude test that determines which faction is best suited for their personality type. All is well if the test gives a single answer as it does in nearly all cases. However, when a candidate's screening presents multiple options they are branded 'Divergent' and seen as a threat through their supposed inability to conform to any of the stereotypes on offer. The test outcome is only an indicator and the next day at the Choosing Ceremony (more Harry Potter?) - a coming of age observance - individuals are free to choose to become a member of any of the five factions. Once the choice is made, there is no going back - the only alternative being to become one of the factionless who live a life of deprivation, on the streets.

The mantra is "faction over blood" so for those who choose a different faction to their family, it's tantamount to cutting all ties with them. This clearly delivers a process with inbuilt conservatism at its core. There are parallels between this vision of a future Chicago and contemporary Western liberal consumer society where everything is okay as long as everyone stays in their place. Perhaps the 'banking crisis' of 2008 demonstrates what happens when one group steps out of line?

The power of consequence and therefore of choice is a central theme of the story. Also featuring is individuation over and against the collective. The way the five predominant character traits of the factions are portrayed is clumsy and overly simplistic. Each trait wears clothing of a single colour - no doubt with great significance. Consequently each trait, as they live in enclaves, appears monochrome but when they are in mixed company there is always the implication of a hierarchy or class structure which I felt was never adequately explored. The complexity of variety that is necessary for a healthy and nurturing community to develop is hardly acknowledged (Ephesians 4 and 1Corinthians 12 come to mind.) Why is it that so often story-tellers seem to only offer a binary choice between fundamentalism or a bland and insipid banality? Have they never enjoyed a cocktail?

At 2:19 long, it is a long film. I wonder what a 90 minute edit would look like? The training of Kris and her fellow initiates into full membership of their chosen faction is where some useful editing could take place. But this is the (long) section where Tris develops a relationship with one of her instructors - Four (Theo James). I felt that the film could never decide if it was an action film with a romantic component or a love story with fighting in it. The inability of the narrative to reconcile this tension left me feeling unsatisfied. Whilst moral dilemmas come thick and fast, I found little if anything of a spiritual nature in this film - more an homage to humanism.

Both Woodley and James turn in strong performances and I look forward to seeing them in Insurgent, the sequel in this trilogy which is already in pre-production and due for release in March 2015. This will be followed by the final installment (Allegiant) - split into 2 parts and scheduled for 2016 and 2017 releases respectively. We have another money-milking franchise to feed! I'll give it 6/10. 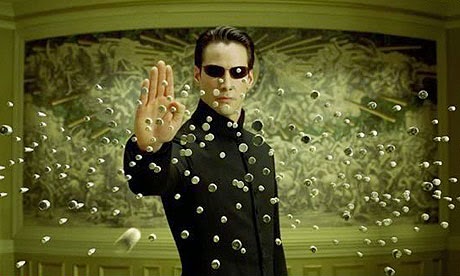 I stumbled on this about to start on TV a couple of nights ago and watched it again - for about the 20th time. I still think it is an amazing film - both cinematically and in terms of developing the whole Matrix universe and crucially provides the pivot and development for the trilogy's story in preparation for the concluding chapter. The Matrix is still my number one film - I've seen it over 50 times. I wrote my Masters thesis on Neo as a Christ figure before Reloaded and Revolutions came out. I will try to be objective but it's not always as easy as it seems!

The visuals are every bit as stunning as in The Matrix, but because of stylistic familiarity they make less of an impact. The balletic quality of the choreography of the fight scenes is pure visual magic. The story line is not straightforward and is developed by characters whose roles and personas embody the development of the narrative. The mutated and viral Smith(s), Seraph,  the Oracle, the Merovingian, the Key-Maker and the Architect all combine to deliver riddles and conundrums that Neo must solve if he is to fulfil his prophesied destiny as 'The One' and bring salvation to the people of Zion.

All this unfolds as Morpheus' faith in Neo holds firm as he battles the sceptics in Zion's military. The Council of Zion as guardians of Zion's heritage and custodians of its future, buy into the prophecies and do what is necessary for Neo to navigate his way through the choices and controls The Matrix confronts him with. Knowing what is real, whom to trust and the outcome of any given choice are the things Neo must constantly weigh as he continues on his pilgrimage of salvation. This is archetypal post modern cinema where the polemics between truth and untruth, individuation and community, machine and humanity all play out. The original The Matrix was released in 1999 on Good Friday for a good reason and as we are in Eastertide as I write this, the parallels are plain to see (although the religious and philosophical motifs are certainly not all exclusively Christian).

Many people have been critical of this film as being too long, too slow and generally a disappointment. It may be a tad too long but if viewers were hoping for another quantum leap of the order of magnitude that The Matrix gave us, I feel this places an unrealistic burden on the film. I enjoyed watching it again and will do so in the future. I now feel spurred to watch Revolutions soon. I will keep the faith and award this 8/10.

Posted by Duncan Strathie at 09:17 No comments:

Close Encounters of the Third Kind 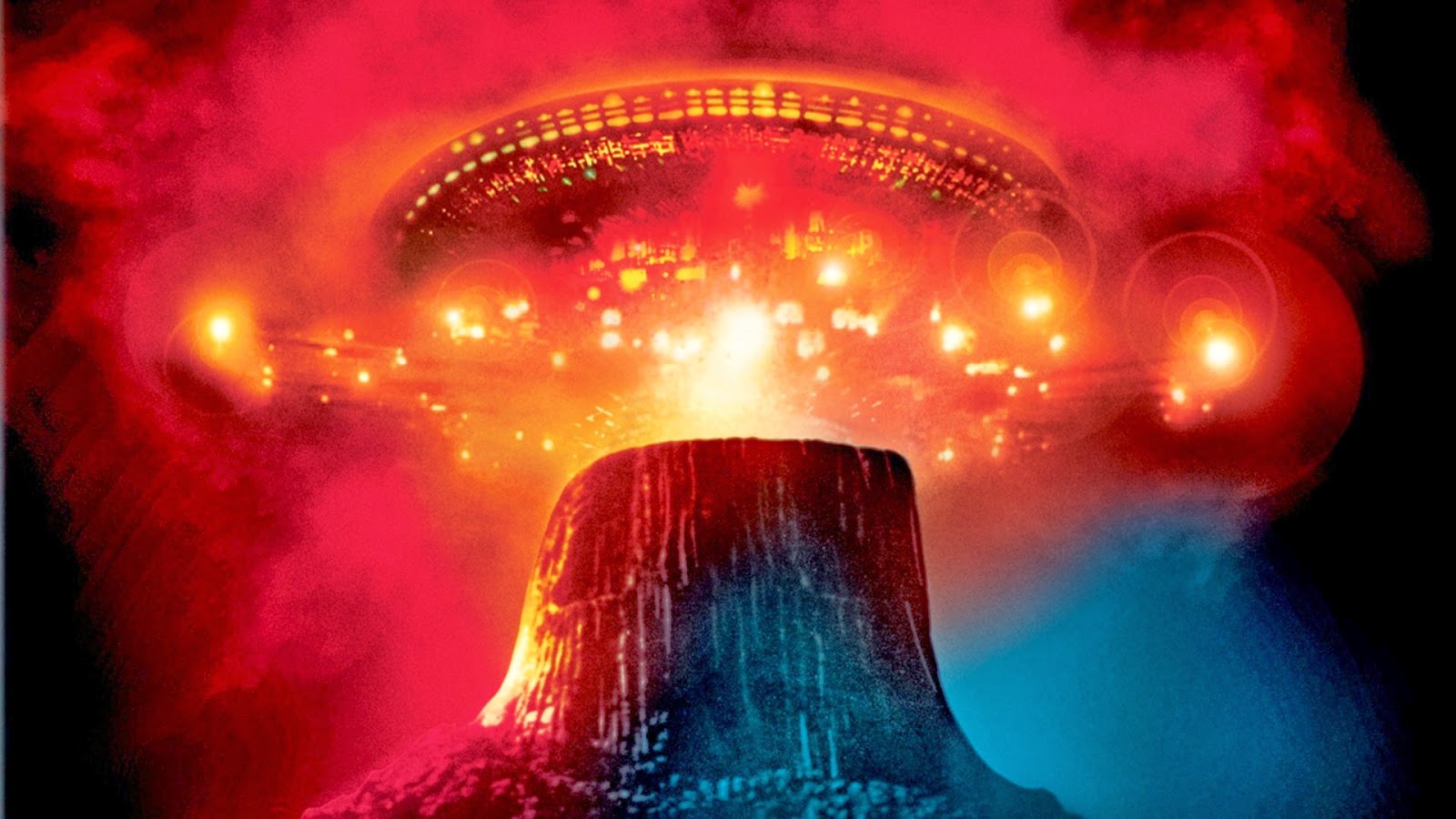 Watched this on Blu-ray last night - would you believe for the first time! I watched the original theatrical version. Coming just two years after Spielberg's early blockbuster Jaws (1975) this helped to cement him as a major force in Hollywood. In many ways this film is as fresh and engaging as when it was first released. In other ways it's very much a product of its time when Cold War tensions ran high and UFO fever was contagious.

The story is gentle enough and moves towards its inevitable conclusion - at a snail's pace. The film could have benefitted from 30 minutes being cut from its 132 minute run time. Any film that deals with an encounter with aliens has to acknowledge the possibility of a bonkers plot and what better way to do it than to have a bonkers main character! Richard Dreyfuss (who also had a lead in Jaws) delivers a strong performance as Roy Neary - a lineman who happened to be in the right place at the right time!

Strange occurrences are investigated by the Frenchman Lacombe (François Truffaut) as missing planes and a ship reappear miles from where they went missing and crowds of people in remote areas of Northern India all share the same experience of an encounter with a five note tune coming from the sky. There is no explanation of why Lacombe has access to the world's leaders and America's military top brass but he is clearly the only one who links the odd sightings and reports from around the world.

Along with the tune and unexplained manifestation of sunburn-like symptoms on people who encounter the aliens is a drivenness on their part to draw and sculpt a mountain-like structure. They don't know what or where it is but at one point Neary even sculpts it out of mashed potato - a scene that has become famous in the annals of movie history. One of many comedic episodes in this drama.

Given that this film was made before the advent of digital special effects the UFO scenes are wonderful in their blurred and fuzzy kind of way. By being visually less well defined, the invitation is issued to the viewer for them to decide what they want to conclude they are seeing. Perhaps that's how UFO sightings are reported anyway? When the aliens do appear they are are so strongly back-lit that their details are hard to see - another clever bit of Spielberg choosing to invite the viewer's imagination to become active.

Having watched the film now for the first time, 37 years after it was made, it's hard to appreciate how much ground it broke as my senses have become desensitised by CGI and green screen film making. It's amazing how much evolution has taken place when you consider visual/CGI landmark films such as Tron, Toy Story, The Matrix, Avatar and Gravity to name but a few. It is however still possible to catch a glimpse of why this film remains so popular and is so important in the development of film-making. I'd like to give it more but because it was too long, it gets 7/10.

Posted by Duncan Strathie at 16:53 No comments: