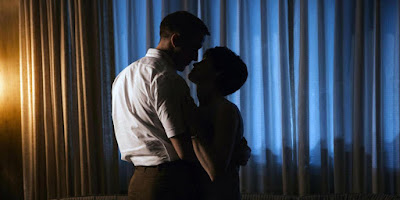 It is an odd feeling, and becoming increasingly frequent, to see films portraying 'history' when they relate to events I witnessed at first hand! I was 10 when Apollo 11 landed on the Moon and remember watching it (possibly a replay at breakfast time) in black and white on TV in days when there were only three channels, no breakfast broadcasting and no rolling 24 hour news! Yep - I'm getting old.

This is most definitely a biopic and much of it must be interpretative. It is not so much a film about the Gemini and Apollo space programmes as a film about Neil Armstrong. Armstrong is played by Ryan Gosling who along with actors like George Clooney and Keanu Reeves specialise in playing themselves in every movie! His wife, Janet is sensitively and at the same time forcefully played by Claire Foy.

The film begins with the heartache of the death of their young daughter Karen. At the time, Armstrong is a test pilot. Armstrong is pictured lovingly playing with Karen and stroking her hair - a display of emotional attachment that he never manages with any other members of the family - except in one dance scene with Janet. Karen's death devastates the family and whilst her brother and mother find some way of coming to terms with it, Armstrong is unable to articulate anything about it and bottles up his emotions. The film essentially explores how that affects his ongoing relationship with his family. This makes him seem dispassionate and uncaring but he uses the inner fire of loss and anger to fuel his drivenness as he gets a post on the Gemini and then Apollo programmes. His biggest weakness and failing, empower his greatest strength, thus enabling Armstrong to be a cool-thinking and totally focussed mission commander.

What the film ably highlights is the high cost to everyone - taxpayers, scientists and astronauts - and their families. The programme to beat the Soviet Union to the Moon cost billions of dollars and too many lives - but they persist with it. There is a brilliant and powerful scene which catches a glimpse of the emotional capital the programme asked these men to invest, where Janet forces Neil to confront his fears and say the unsayable to his boys before departing on the Apollo 11 mission.

At 144 minutes, I was anticipating that there would be slow patches where it would drag. There weren't any. The pace was well maintained and whilst two or three hallmark events do appear, many events do not as the focus is not on the missions but on Armstrong and his family. Excellent Direction. I'm glad it wasn't Clint Eastwood in the chair - it would have been a very different film! This is not at all jingoistic and I came away with a sense of American greatness being defined in the pursuit of knowledge and exploration and getting ahead of the Soviets, rather than saying we are the biggest power on Earth. Well done. There was also careful use of original footage which was creatively cut into the film on a number of occasions - especially when documenting the wider social happenings of the time.

There are plenty of intimate close-ups where the camera is packed in tightly with the astronauts - especially in the small Gemini capsule, where you  almost feel the sweat dripping and splashing as they jerk and rattle through lift-off and into orbit. There are also the wide shot colour spectaculars of the Saturn V taking off in the clear Floridian skies and the moon as never seen before! Close ups of the reflective helmets on the Moon never featured the camera operator or anything other than Moonscape. Great work.

As you may have gathered I really enjoyed this film. Yes, it took me back to my childhood, yes it was about the sexy space programme, but most of all it was about ordinary human beings with all their emotional flaws, achieving extraordinary things. Do go and see this movie on the big screen - it is in IMAX too. Despite Ryan Gosling, I'll give it 9/10.

Posted by Duncan Strathie at 17:02