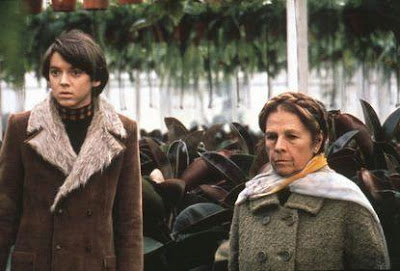 I'm not at all sure how I had managed not to have seen this film before. I bought a used copy of the disc for peanuts on an auction site because it was referred to in so many reviews and pieces of writing on film. It is a gem - an oddball and goofy film that is at one and the same time profound. It is hard to imagine the impact this film would have made on its initial release in 1971.

Conceived and filmed in the Bay area around San Francisco, this film picks up the metaphysical interrogation of the meaning of love and relationships and 'correct behaviour' in the glorious days before political correctness. It was also made in the middle of the Vietnam War and Harold is about the average age of the US soldier in 'Nam - 19! For me the film seeks to reflect on three things:


Harold appears to be an only child in a wealthy society family. His mother exudes expectation with every breath and the absence of a father figure will no doubt by some be seen to be a significant factor in Harold's psychological development. Harold has developed an obsession with death and throughout the film stages a number of elaborate and highly theatrical suicides. Each one is a brush with death but they are more Hollywood stunt than serious attempts to end his life. Harold spends the rest of his time attending funerals. His car of choice is a hearse.

His mother sets up a series of encounters with likely partners for her son but these all come to nothing as Harold is not interested. Then he meets 79 year old Maude who also attends funerals. She hot-wires cars, rides a Harley and evades the police for fun. Maude lives in what looks like an old railway carriage, poses nude for an ice sculptor and has a concentration camp tattoo on her arm. She lives for the moment and seems always content with her lot. Very much an existentialist in the style of Mr Keating in the Dead Poets Society.

After the second suicide attempt Harold is sent into therapy by his mother and the therapist presents as an archetypal Freudian psychoanalyst. Harold also repeatedly encounters the same Catholic priest taking funerals and is forced to visit his uncle who is an Army recruiter with one arm missing! This film has many darkly comedic episodes and one of them has a series of scenes where Harold is lectured first by his therapist with a portrait of Freud on the wall, then by the priest with a portrait of the Pope on the wall and finally by his uncle with a portrait of Nixon on the wall. Authority is lampooned and the meta-narrative they represent is derided. All very post modern.

I found this to be an excellent and engaging film which invites reflection on a wide range of issues and ideas. There were plans for both a prequel from Maude's perspective and a sequel from Harold's perspective but neither came to fruition. I think that's good as the film deserves to stand on its own and to continue to grow its cult status. I'll give it 7/10.

Posted by Duncan Strathie at 19:54 No comments: 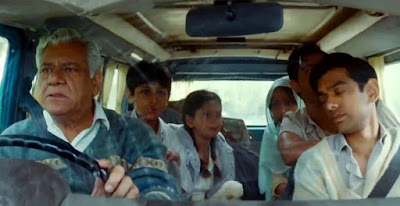 This film will leave you smiling and impart warm fuzzies in large quantities as it delivers its happy ending - it is after all a Dreamworks film. The narrative arc is very straightforward but doesn't disappoint. This is a film that is first and foremost about the characters and the clash of cultures between Mumbai and rural French Michelin starred cuisines.

Having been driven out of Mumbai by a gang who burn down their restaurant in an election result dispute, the family seek asylum in Britain. Finding the weather too inclement they set off in a old Transit van across Europe with Papa Kadam (Om Puri) knowing he'll find the right place to set up a new restaurant when he sees it. That happens to be in the rural village of Saint-Antonin-Noble-Val - 100 feet across the road from the Michelin starred "Le Saule Pleureur" (The Weeping Willow) run by Madame Mallory (Helen Mirren). With all its gaudy ostentation, Maison Mumbai duly opens and so the feud between widow and widower sparks to life. The 100 feet also separate the cultures and cuisines of classical French and Indian food, the aspirations of Marguerite (Charlotte Le Bon) and Hassan (Manish Dayal) to develop their culinary skills and reputations, and a family-run enterprise over and against a kitchen that simply hires the best chefs.

There are a lot of comical moments in the film that the cast deliver with great charm and warmth. The way in which the 'cold war' develops between Papa Kadam and Madame Mallory is masterful and filled with child-like petulance. The blossoming love between Marguerite and Hassan always looks unlikely to come to fruition but is another central thread that weaves this tale of Mumbai colliding with rural idyllic France.

Unusually for me I had first encountered this through the novel of the same name. The novel spends much longer in the beginning in India and the descriptions of Mumbai life, its restaurants and markets will evoke pictures, sounds and aromas for anyone who has had the privilege of visiting India. The mob storming the Kadam's restaurant in Mumbai and a similar experience in France are unwelcome intrusions in an otherwise gentle and fun romantic story that meanders as gently as the river flows through the countryside of Saint-Antonin-Noble-Val.

This film will warm your heart and make you smile. A lovely tale well told, with strong characters that will endear themselves to you. It might even make you want to phone out for a curry! If you've not seen this, do add it to your list of films to watch. I'll give it 8/10.

Posted by Duncan Strathie at 12:44 No comments:

I watched this last week whilst visiting friends in the area of France where a lot of the action was filmed around La Turbie above Monaco, Villefranche-sur-Mer and on the streets of Nice. It's amazing how use of clever camera angles and good editing can morph disconnected reality into something completely believable.

This is an action film with plenty of car chases, shootings and explosions. I read somewhere that 80 cars were written off in the making of the film. The story is quite simple. A number of former special operatives are brought together to secure a briefcase that is heavily guarded. We never discover what's in the case - it simply acts as a MacGuffin to give the rest of the plot something around which to orbit.

This is a film where the viewer needs to pay attention because there are many players and the plot keeps twisting and turning. It is difficult to know whom to trust. The different groups wanting the case are simply referred to as 'The Russians' or 'The Irish' and then there are of course the independent mercenaries trying to make a fast buck.

The film is set entirely within France - mainly in Paris and Nice. There are regular car chases with seemingly impossible stunts. The way the story unfolds invites the viewer to develop a fondness for the team trying to obtain the case and in particular for the characters Sam (Robert De Niro) and Vincent (Jean Reno). The former KGB agent Gregor (Stellan Skarsgard) succeeds in making you loathe him and each time he escaped a bullet I must confess I felt disappointed.

Morally and ethically this film is intentionally a muddle - such is the world of espionage. That we need people like this to operate in a bubble beyond the law is regrettable yet the work they do bears fruit for all - an interesting point to discuss. The final outcome was rooted in reality as it directly brought about the possibility of the Good Friday Agreement in Northern Ireland. Does that mean that in this instance the means justified the end? As I said, it is a murky world.

John Frankenheimer's Direction is excellent with exciting camera angles, frequent car chases and an ensemble cast that melds together to produce a performance that is greater than the sum of its parts. If the film has any real weaknesses they lie in the script and patchy dialogue - De Niro's Sam gets all the good lines. This is a good action film with plenty of exciting car chases. I'll give it 7/10.

Posted by Duncan Strathie at 08:09 No comments: