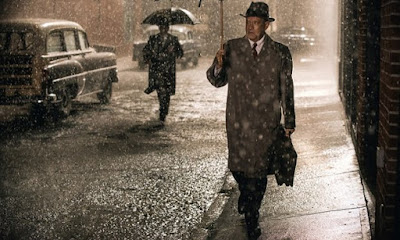 This is an intelligent and well acted film. Very enjoyable, largely believable and an important reminder of fairly recent history. I've had the disc sitting on the shelf for a while and decided to give it a spin.

The film opens in 1957 and is very much about the Cold War. I was born the following year in West Germany - because of the Cold War. (It is interesting when filling out official forms because I was born in a country that no longer exists!) The film captures the fear factor so effectively generated by the American propaganda machine, the long and unwelcome shadow of McCarthyism and the helplessness of the physical division and separation of the city of Berlin. On top of that Tom Hanks as James Donovan and Mark Rylance as Rudolph Abel turn in tremendous performances in this Steven Spielberg directed film which was co-written by Matt Charman and Joel and Ethan Coen.

This film is less about espionage itself and more about the international legal and political consequences of spying and how spies who get caught were dealt with - and in this case repatriated. Whilst a lot of the historical material in the film is accurate, it does sometimes stray from historical fidelity but to good effect. This is a film - not a documentary.

The story focuses on legal process and Donovan's personal fidelity to uphold justice - even for the Soviet spy he has been asked to represent. Spying is a dishonourable game but this film contains much that speaks highly for the personal honour of both lead characters. It speaks less well of their respective governments and their shady dealings.

There is much of merit in this film that is worth exploring. The obvious issues are the moral implications of spying, getting caught spying and the brinkmanship of nuclear deterrence. Prejudice of the judiciary features. The creation of the Eastern Bloc to maintain a physical buffer between Russia and the West and also to perpetuate a Stalinist ideology are other themes that could be explored. The building of the Berlin Wall and its effect on the city and its people is offered as a topic for reflection.

As you will have gathered I really liked this film and will award it 8/10. If you've not already seen it - do track it down.

Posted by Duncan Strathie at 19:33 No comments: