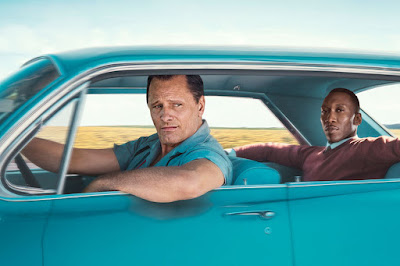 I have been trying to catch this for a while - it was well worth the wait. This is an engaging film that draws the viewer in an and in my experience invites them to develop a heart-felt liking for both the lead characters. It's period setting in 1962 New York and the Deep South on the cusp of the civil rights movement is both vibrant and resonant as it shows the best and worst that post-war USA had to offer. It is however a film with some issues.

The credits make it clear that the film is "inspired by a true friendship". The script was part written by the son of central character Tony Vallelonga (Viggo Mortensen) based on interviews with his father and Dr Don Shirley who in the film is played by Mahershala Ali. There was no consultation with the Shirley family and they disagree with some of the ways their relative is represented. However, this is a drama based on true events and not a forensically researched documentary.

The film also lays itself open to accusations of presenting viewers with a white saviour figure but I feel this is misplaced as it could easily be argued that both of the lead characters in fact save each other to some extent. At worst, this is a white reading of a black history and that will have to suffice as at the end of the day the people writing the script and making the film were largely white. That may be the larger problem.

For me the story of the film centres on the developing relationship between Vallelonga and Shirley. It happens to play itself out within a context of racism - this is not primarily a film about racism. This goes deeper than skin colour, this is a film about humanity connecting at a deep level.

The two of them would never have ordinarily met as their worlds are so opposite. Shirley, the refined international pianist with several degrees and many languages. Vallelonga from immigrant stock living in the Bronx, trying to sustain his family amidst the boorish macho culture of testosterone fuelled Italian petty criminality. The film is more about a clash of cultures. Embedded in Vallelonga's  is innate racism (I didn't know Italians referred to black people as Aubergines!). Shirley on the other hand attempts to rise above the overt racism by maintaining his dignity but is relentlessly undermined - especially the deeper into the South they travel.

One thing that unites the two characters is that both have addictions. Vallelonga is engaged in a race to see if chain smoking or constantly stuffing himself on junk food will be the first to trigger a coronary. Shirley on the other hand gets through a bottle of whisky a night as he tries to kill off his liver. What is it that these behaviours are trying to mask?

Once completed, the narrative arc can be seen to be wholly predictable having travelled its journey with a gentle and constant pace - although at times it does seem to become endangered! At just over 2 hours long, this film did not drag at all. The acting from the two leads is extremely strong and will give you much fertile soil for reflection on relationships, life goals, family, friendship, honour, integrity and love. I commend this film to you and am happy to give it 8/10. Enjoy!

Posted by Duncan Strathie at 15:53 No comments: