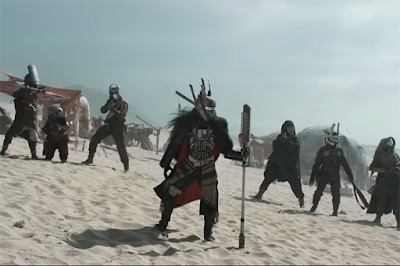 This is the second 'anthology' movie of the franchise and follows Rogue One. The story is basically about two things: how Han Solo and Chewbacca meet up and how they gain possession of the Millennium Falcon. Telling you that does not spoil the plot as this is an action-driven film directed by Ron Howard. The action is pretty non-stop - just one lull for a short lovey-dovey scene and then its back into action.

Setting the film when the central character was much younger than when we were introduced to him in 1977s Star Wars, was always going to be difficult to get right - but I felt they did a good job. Choosing which characters to feature that are contemporaneous with the original series was sensitively handled. The worlds created in the film felt sufficiently familiar and convincingly slightly  less developed than the ones encountered in Star Wars et al.

The film's plot centres on relationships - particularly on trust, love and gallantry. It could equally have been a Western or set in medieval times - the story is not what drives this film. Woody Harrelson puts in a great performance and it is unnerving to hear the voice of Linda Hunt as some kind of vampirical monster that lives in a seething cauldron of soup! Paul Bettany as the baddie Dryden Vos does a very convincing job!

The two main characters are the young Solo played by Alden Ehrenreich and his love interest Qi'ra played by Emilia Clarke. To have such an English Rose in the far-flung corner of the universe and then for her to constantly offer ambiguities about where her loyalties lie, was a little jarring - but no doubt it will all pan in the sequel(s).

There is a hint of a physical relationship between Lando Calrissian (Donald Glover) and his droid L3-37 played by Phoebe Waller Bridge. I found that a disturbing concept to have leapt into my mind - but I guess that is the way the world is going. This was a good, solid Star Wars film. Not spectacular, but filling in backstory in a helpful and believable way. well worth going to see and adding to you collection when available. I'll give it 7/10.