The Apocalyptic Worldview on the Silver Screen

THE APOCALYPTIC WORLDVIEW ON THE SILVER SCREEN

I was invited to lead this session and I was given nothing more than the title of the session and information about the general theme that I picked up from the brochure. My problem wasn’t so much about what I should do, but knowing I only have an hour for this session my difficulty was in deciding what to leave out!

My hunch is, that apocalypse is a powerful word, that evokes a strong response in most people. Depending on your journey, your culture, which part of the Christian tradition you inhabit and when you grew up, you are quite likely to have a different set of images in your head compared to the people sitting near you when you hear the word apocalypse. I guess if you are a follower of soccer and support the English team Chelsea, then this might be your image! 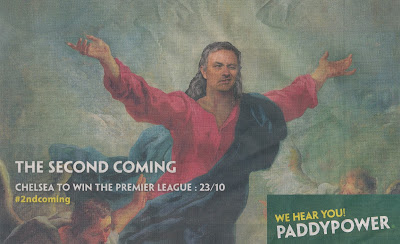 I’d like you to turn to your neighbour and very quickly share with one another what you understand by the word apocalypse.

What did you come up with?

A word of warning. I’m going to be showing some clips which by the nature of the subject we are exploring may not be to everyone’s taste. Viewer discretion is advised.

For many people the word apocalypse is associated with the end of the world. I imagine that feeling might be more real if you live in Syria today, or Uttarakhand in India or on the Korean peninsula, or grew up with the ever-present threat of the Cold War in the 1950/60’s, or in Vietnam in the 1960’s.

Francis Ford Coppola’s portrayal of the hell, pointlessness and meaninglessness of war in the movie Apocalypse Now is a classic of cinema. But as much as we might readily associate the word apocalypse with the end of the world, it actually has a subtlety different meaning.

which in turn derives from apokalupto which means to uncover or unveil – apokalupsis means uncovering or unveiling. Generally speaking in the English translations of the Bible it is given to us as the word revelation.

A search in the New Revised Standard Version of the Bible produces 14 occurrences of the word ‘revelation’. A full list of these will be in the hand out. Although this is a School in Biblical Studies, I will return to the area I’ve been asked to explore with you, and that is the Silver Screen.

With the possible exception of arguments about same-sex relationships, debates about ‘end times’ and unlocking the secret code of the Bible, and in particular the Book of Revelation, have captivated congregations over much of the last 40 years or so. Much of the debate has been driven by the Evangelical Church in the USA where views on these matters run especially strongly. Cinema has given us what, on the face of it, appear to be honest attempts to portray the Book of Revelation, such as this 2002 offering The Apocalypse produced by a collection of Catholic and Italian media companies.

To me Richard Harris sounds more like Dumbledore than The Evangelist! The problem with this sort of film is that you need to make theological assumptions about what underpins the interpretation you make in order to deliver an image on the screen. This was obviously a low budget production, and they seem to have gone for a literal portrayal of what John sees.

One reviewer on Internet Movie Database, rejoicing under the name of ‘Preaching to the Quire’, lavishes this comment on this film:

“There are two types of films when it comes to historic-religious movies: there are such epics as "Ben Hur" or "Quo Vadis", which have religious undertones, yet are fun and accessible to those who don't particularly care for religion. And then there is a legion (pardon the pun) of pesky little bible films, that makes you feel like you've invited Jehovah's Witnesses into your DVD player. "The Apocalypse" belongs to the second category.”

How you choose to understand the Book of Revelation depends very much on your whether or not you hold to a pre-millennial, post-millennial or a-millennial position and within that what your views on when the rapture and tribulation occur – all of this built on passages of scripture from Daniel 2 and Revelation 20.
Such is the preoccupation with the meaning of the millennium and the attendant apocalypse that whole industries have been spawned to spread this particular take on the Gospel. Even the History Channel tries to help us unpick what the code.

In my local Christian bookstore, there is a huge section devoted to books about end times and the apocalypse. If you stand within one of the streams of Dispensational Theology there are wonderful books with charts and diagrams explaining the apocalypse.

One of the most prolific writers is Tim LaHaye who as well as writing Charting the End Times has co-written 16 books in the Left Behind Series which have sold more than 60 million copies worldwide. As I said, it is big business.

For some sections of the Church, the power of the threat of the prophetic words in the Book of Revelation have been recast into an evangelistic tool to coerce vulnerable people – particularly teenagers into a conversion experience, as we see in this 1972 film A Thief in the Night.

I hope on this occasion it’s alright to share the ending with you! The whole film builds up the tension as more and more Christians expect the imminent rapture as a precursor to the tribulation before Christ’s return and the wrapping up of earthly history.

I want to turn away from Christian cinema now with its emphasis on Christ’s second coming and turn our attention towards mainstream TV and cinema and it’s deployment of apocalypse in a more dystopian, end of the world kind of way.

I wonder if anyone remember s Survivors? A BBC production from 1975 which portrayed the after-effects of a deadly virus that wiped out much of the world’s population and all that stemmed from it – the need to survive, and maintain law and order. Then in 1984 came the BBC’s Threads.

I don’t know about you but I find thee types of films to be hauntingly horrifying. A lot of entertainment in our world is predicated on our desire to enjoy being scared. As long as it’s a roller-coaster or a movie, something confined and controlled, we are happy to let our fears be heightened and enjoy the adrenalin rush. The challenge for film-makers is to draw us into a story that feels so real that we suspend our safety mechanisms and find ourselves significantly affected by what we have seen. This is nothing new, horror is one of the oldest genres in literature and film – not to mention hyperbole in Biblical scripts.

Wikipedia lists 22 categories of disaster movies – most of them centring on ‘natural’ disasters – avalanches, volcanoes, fires, chemical, biological, nuclear and of course this recent offering on tsunamis.

One of my favourite films, images from which are lodged in my interior video vault is from 1954. America was dealing with its collective guilt over Nagasaki and Hiroshima and nuclear testing was in full-swing as the Cold War spiralled towards confrontation. Here is the trailer for Them.

Sometimes cinema attempts to educate and persuade rather than beat audiences into submission. Films like The Simpsons Movie warn of the consequences of pollution and its effect on local communities. After his term as Vice-President, Al Gore turned his attention to alerting the world to the dangers of climate change and made the film An Inconvenient Truth which features this.

Climate change was also picked up in the movie The Day After Tomorrow which saw the northern hemisphere submitted to a devastating storm followed by an ice-age. Rather than a trailer, here’s a perceptive and helpful review of the film.

We all have our favourite disaster and of end-of-the-world movies. Most, because they are by definition set in the future, belong to the genre of science-fiction. Some of them are extremely gruesome and paint a picture of a world and its end that are none too appealing – The Book of Eli, The Road or Melancholia to name but three. It’s amazing how many feature a saviour figure who is literally trying to save the planet – and sometimes achieves it. It reminds me of something I read in 2 Corinthians once!

History records the fall of species or races in what appear to be single acts on an apocalyptic scale – the dinosaurs, the Minoans, the residents of Pompeii, or the Mayans. Here’s a look at the most recent global apocalypse film made in 2008 bringing us a view of the end of the world based on the Mayan prophecy that had the world ending in December 2012.

So, if I say Apocalypse movie to you now, what comes to mind? Have a look at this lot.

Seven and half minutes of mayhem neatly packaged for us on YouTube cutting together 99 clips from about 50 movies – all of which are listed in the hand out. And so the trend continues with the recent release in the UK of World War Z.

I think it would be fair to say that there has been a lack clarity of thought on the part of film makers when making a distinction between a bad, large-scale event and the dystopian existence that would follow, a true planetary apocalypse, invasion by flesh-eating zombies and a super-hero saving the planet. These themes seem to become conflated in many films to help increase the leverage of the narrative and produce ever more impressive CGI special-effects. At the end of the day it’s less about art and more about tickets and concessions sold at the box-office.

And there is the catch. Human beings are a narrative species. We live in stories – in fact our life is a story and in watching film our story intertwines with the story of the film-maker and if we have eyes to see and ears to hear, God’s story.

We are fearful of loss and so we want to know (at least in Western cultures) if the story has a happy ending – is this life worth something or is our existence meaningless? It is the archetypal metaphysical existential question. Super-heroes keep the myth of redemption alive in the collective psyche of the film-watching public. If we can no longer rely on Arnold Schwarzenegger, Bruce Willis or Keanu Reeves to guarantee our salvation on a daily basis, we might just have to turn to that radical wandering preacher of Palestine from ancient history. He’ll come and do something, at some point somehow – we’re just not sure what, where and when – or how if we’re being honest. But then that’s what faith is for.

Here’s a look at what Lars von Trier thinks the end of the world may look like in Melancholia.