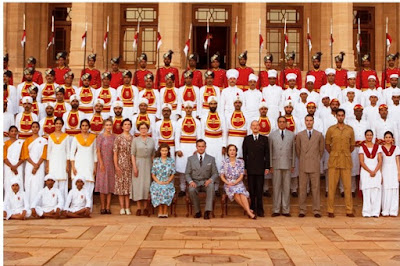 The problem with historical dramas is that people are very quick to be critical of the accuracy of the historical elements whilst forgetting it is a drama. This film is not a documentary, but it is certainly dramatic.

The casting is excellent here with Hugh Bonneville playing the titular Louis Mountbatten and Gillian Anderson his forceful and caring wife Edwina - with her first class diamond-cut English accent. The film captures the mission impossible the Viceroy is sent on. The urgency to find a solution, the impossibility of the timescale, the intransigence of the party leaders, the double-dealing and betrayal of politics and the love of a Hindu for a Muslim - it's all here and it combines to produce a compelling and engaging piece of story telling.

The film highlights the sad and painful legacy of British colonialism. A once dominant country now exhausted by the exertions of WWII and the impatience of the Indian people to finally achieve their independence - but at what cost? The film is very polarising in the way it portrays the mistrust of Muslims and Hindus. A divided nation is portrayed in miniature with an increasingly divided Viceroy's household and the hope of reconciliation and renewed national unity embodied by the love of Hindu Jeet (Manish Dayal) for Muslim Alia (Huma Qreshi).

What is clear is the immense sense of duty felt by the Mountbattens and their sensitivity to and sympathy for the Indian people. This portrayal shows Mountbatten to be a man of unshakeable integrity in a world where too many others lack the ability to maintain theirs. I'm not altogether sure how Gandhi comes out in this film - except perhaps as an Indian Yoda!

If you want a history lesson, approach this film with caution. If you want to be engaged and entertained by some very good acting, give it a go. I'm giving it 8/10.

Posted by Duncan Strathie at 21:46 No comments: 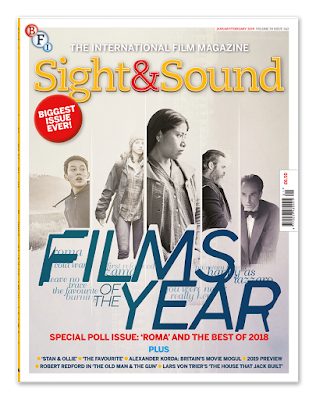 As you will know, I have a keen interest in films and because of that many people assume I'm a film buff. I beg to differ. I do not have an encyclopaedic knowledge of cinema. I am not able to immediately list all the films made by this Director of that Actor. I simply enjoy engaging with stories and when they are well crafted, that adds to my enjoyment. I then of course enjoy reflecting on them and how they intersect with my story and God's story.

S&S has just published its Top 20 of 2018 - how many have you seen? Confession - I have seen none of them! One or two I did want to see but missed and at least one I decided I didn't want to see. How many did you make? Interesting to see only one or two 'mainstream' titles and no mega-blockbusters. What does that say?

Posted by Duncan Strathie at 09:30 No comments: