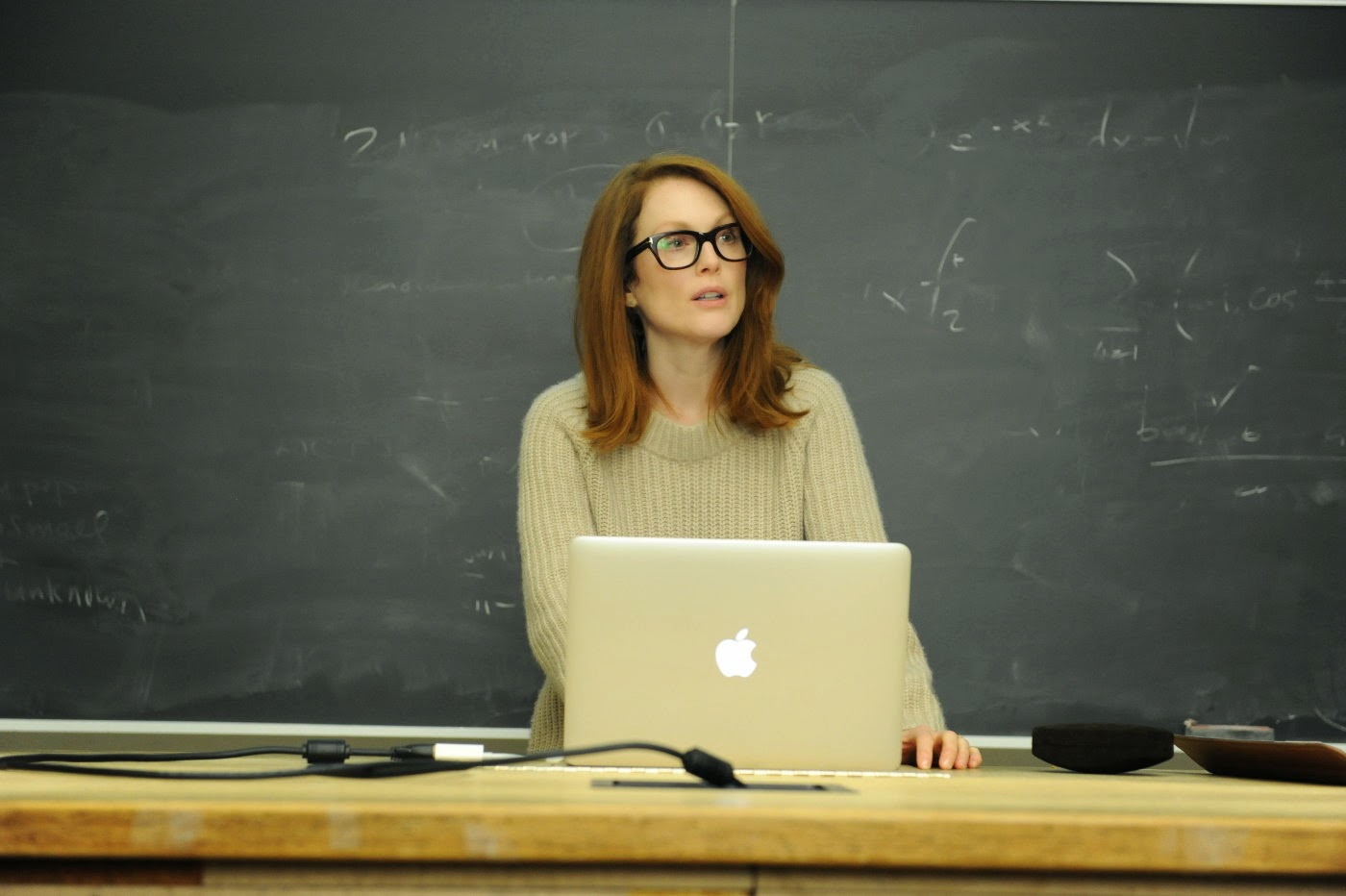 What is it that makes you, you and me, me? What is intrinsic to your identity? Human identity is a complex thing. It is made up of lots things - some more tangible than others. Our physicality is only part of our identity - but helps us to recognise one another easily. For most people our body undergoes gradual change as we age. The sudden loss of a limb or the agency of some part of our physical body will most certainly change anyone - but we would still usually recognise them without much difficulty. But what happens when the body looks unchanged but behaviour and personality change so much and so quickly it makes it hard to recognise someone? How much can fade away and leave the central character feeling that she is still Alice?

The subject matter of this film is well known so I won't be spoiling anything if I discuss the title character's unforeseen and rapid deterioration as early onset Alzheimer's takes its grip. Julianne Moore's performance in the title role won her an Oscar and deservedly so. Her depiction of the effects of this horrible disease is utterly convincing but where this film gives added value is the way in which it portrays the effects of the disease's progression on the rest of her family.

As the diagnosis is made and news of it shared with the three adult children, the discovery is made even more unwelcome when it is disclosed that this is a genetic form of the disease. That means that there is a 50/50 chance of the children having the gene and if they do they have a 100% chance of developing the disease. Amidst the shock of this unwelcome news, everyone promises to rally round and do what needs to be done - as any family would do. What this film does extremely well is to show how increasingly difficult this becomes as the disease tightens its grip on Alice. Her husband and children all respond in ways that are perhaps unexpected - but it shows what each one needs to do to cope with the unfolding situation and find some semblance of normality for themselves.

The tragedy is heightened because of the career Alice had built for herself as a Professor of Linguistics at Columbia University in New York. Communicating ideas effectively by using language well, is what helped to define her. Once that began to be taken away from her, Alice's sense of self begins to diminish - made all the more cruel as she often isn't aware of the changes herself. In a lucid moment she says

"I used to be someone who knew a lot. No one asks for my opinion or advice anymore. I miss that. I used to be curious and independent and confident. I miss being sure of things. There's no peace in being unsure of everything all the time. I miss doing everything easily. I miss being a part of what's happening. I miss feeling wanted. I miss my life and my family."

This film offers opportunities to explore the things that help make up a sense of self-identity. It also offers an exploration of family dynamics in the face of a horrible illness and an opportunity to reflect on what really matters. It offers a potent reminder of how in the end, it can be foolhardy to place all our trust in the things of this world as in the end the illusion of comfort that they bring is only ever temporary. It also invites debate about assisted suicide. This is also a film about love.

Hopefully the film will help to increase awareness of Alzheimer's and thereby the research resources being deployed to find a treatment and cure. In the meantime we are left with a painfully accurate depiction of the effects of this disease and an equally painful reminder that a good career, a 'perfect' family and all the intellect in the world mean nothing when a particularly aggressive form of Alzheimer's comes calling. This is a heart-warming film but not really an uplifting one. Alzheimer's is a scourge of our time and this film presents it in all its lurid horror. It is an important film - go and see it. I'll give it 8/10.

Posted by Duncan Strathie at 15:04 No comments: 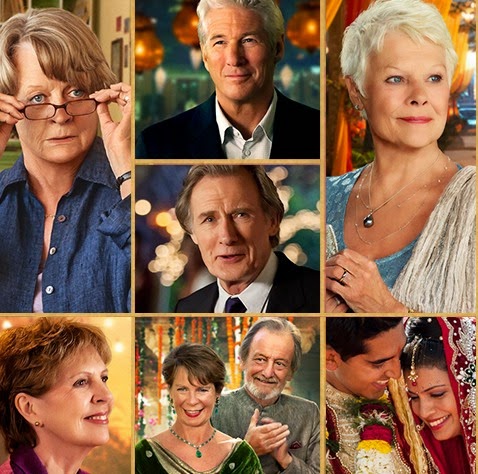 The fans demanded more and what they got was Richard Gere (Guy Chambers) goes to Bollywood! This sequel was created on the back of fans demanding more - and that is exactly what it delivers - more of the same. But that's okay because that's what is so endearing about the film - people struggling with relationships, commitment, acceptance, love - the important things we all struggle with. These subjects usually appear in films featuring people going through a mid-life crisis of existential angst or teenagers coming of age and trying to develop a sense of self.

What gives this film its unique twist is that the main characters are well advanced in years and cannot afford to wait to let things take their natural course. It is interesting to see that with a whole lifetime's experience behind them, they face the same struggles, questions and doubts as any teenager. The things that matter most carry a high price tag. I would love to watch this with a group of younger people and ask them to explore the parallels between the challenges faced and feelings felt by the characters in the film and their own experiences.

The narrative arc of the film is quite simple but largely peripheral to the story. What drives this film is the character's search for love, affirmation and intimacy in a form that befits their age. Dev Patel as Sonny Kapoor, owner of the Best Exotic Marigold Hotel is perhaps the character that shows least development over the course of the two films - except perhaps he has turned the volume up! I found his character a little too strident and fatiguing. All the other characters seemed to develop in some way.

The film is filled with marvellous one-liners again: "Lord have mercy on my ovaries", "There's no present like the time", "He is so handsome, he has me urgently questioning my own sexuality", "Why die here when I can die there?", "You win some and you learn some" and "'How was America?' 'It made death more tempting'".

This is a warm and uplifting film. It pulls few surprises. Mercifully Mrs Donnelly (Dame Maggie Smith) has lost her strident racism and is the wise keeper of everyone's secrets, Douglas Ainslie (Bill Nighy) is still painfully unable to say what he means and is so deferential it hurts and Evelyn Greenslade (Dame Judi Dench) needs to hurry up before death overcomes her!

I would encourage you to go and see this film - and probably the Third Best Exotic Marigold Hotel if the ageing stars manage to keep going for long enough. The warm reviews are spot on you will not be disappointed. I'm going to give this 7/10.

Posted by Duncan Strathie at 10:04 No comments: