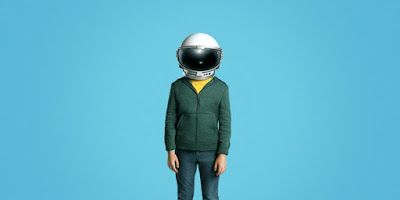 I watched this film with a group of friends at church as part of our Lent series which this year is focusing on "This is Our Story: exploring the stories of our faith and our own stories". The film certainly fulfilled that brief as different sections of the story are seen through the eyes of the main characters, each in turn. There weren't any explicit encounters with 'faith' per se, but the film did have plenty to say about inclusion, difference and acceptance.

The central character Auggie Pullman (Jacob Tremblay) was born with Treacher Collins Syndrome which left him with facial disfigurement - even after 23 surgeries. He has doting parents and a sister whose long-suffering qualifies her for immediate beatification. And therein lies the films weakness. Visually imperfect Auggie inhabits an otherwise perfect world where everyone else is beautiful, homes are comfortably luxurious and when he eventually does go to school, having previously been home-schooled, he attends a top private school in a well-to-do New York suburb. The narrative arc is therefore set. How can Auggie's presence, including all the emotional pain he suffers, become a catalyst for transformation so that all the perfect people in the film can become even more perfect!

Whilst the film offers an excellent exposé of the cruelties school children can inflict on one another, it remains locked in a world that cannot transcend its culture. This film has a very American feel to it. Understandably, Auggie's world is very self-centred, but through his love of science and in particular space travel and science fiction, he is able to initially win over one or two and eventually by the end of his first year in school, everyone else. Given what the Pullman family have been through, despite their love for one another, it's hard to see how none of them are in therapy. I was also left questioning the marriage relationship of Auggie's parents which seems only to have been strengthened through the family's shared ordeal. Another expression of perfection in this film?

By its subject matter and the encounters it presents, the film invites viewers to consider how they handle and accept difference and whether or not they would capitulate and follow the herd or take the harder road. All of this is made possible by the wise and loving actions of the School Principal and Auggie's class teacher.

All of that said, this film provoked an affective response in me that left me with tears welling up on more than one occasion. It's predictability and certain outcome do not make the journey Auggie travels any less painful, effective or inspiring. I guess the value is in the travelling and it is our travels which give us the raw material for our stories that enable to share at a deeper level with one another. I'll give this film 7/10.

Posted by Duncan Strathie at 07:49 No comments: