When you die, what is that you want people to say of you? Perhaps it’s something like you “died with your eyes closed and your heart open”?

In this clip from the film Bucket List Morgan Freeman’s character Carter talks of the death of a new friend Edward. This film explores two unlikely characters thrown together in the shared experience of being diagnosed with cancer and given only months to live.

Carter remembers back to a philosophy class he took where the Professor set the students the task of writing a 'Bucket List' - a list of things to do before you 'kick the bucket' - die. Carter's list of 45 years earlier was filled with ideological and idealised things. Now, as he lies in his bed with I-V chemo, he writes a new list which is more realistic and pragmatic - but no less meaningful. Edward gets hold of it and decides to use his wealth to make it happen for the both of them before they die. Buoyed by the medication they set off and enjoy a range of activities and locations.

Let’s take a couple of moments – write your own Bucket List. This is just for you – I’m not going to ask you to share it.

In a day exploring themes of death, dying and loss, it would be natural for us to concentrate on perhaps the weightiest of these – death. But that would be to deny that everyday we experience loss of some kind. But perhaps for those of who wear a collar, the fact that one way or another one of our primary roles is to help people prepare for their death, is never far away!

We have limited time today and I would love to explore themes of loss as depicted in a wide range of films. I guess we could have scratched the surface in lots of places and seen how much we could cram into our time together. Instead, I have opted to give a more general introduction and then to home in on two films that explore the theme before us, in ways that I hope will encourage fruitful reflection and discussion. There will be plot spoilers so be warned – but I hope not too many for you.

Let’s brainstorm for a minute and see how many films we can come up with that we feel explore these themes – shout them out.

These themes are sadly commonplace and if cinema in any way reflects ‘real life’ as we experience it, then many films will carry – at least in part – something relating to these themes.

I thought it would be interesting to Google images on these themes and there’s no prize for guessing what most of the pictures on loss are about one, two. But if we Google dying what might we expect? The Dying Gaul is a popular image and so are images like this. Death on the other hand moves away from reality into the realm of fantasy, perhaps indicating that in general people still find this a very difficult subject to deal with. These were the first two images that Google presented me with!
Perhaps then, film makes this difficult to deal with taboo subject, more accessible? In the film Snow Cake, Sigourney Weaver plays a woman with autism whose condition allows her to act with brutal and unguarded honesty.

Different cultures treat dying, death and the deceased very differently as this clip from the Japanese film Departures shows.

Going to the other end of the scale we have films that deal with loss of specific things, gentle films that depict a loss of innocence such as Picnic at Hanging Rock or Kite Runner or Lord of the Flies. Or films exploring the same theme in a more brutal way such as Platoon or Pan’s Labyrinth!

We have films that explore themes of loss of faculty such as the onset of dementia in films like The Savages or with Margaret Thatcher in Iron lady or loss of family cohesion because of unspoken guilt in films like Ordinary People, or Patricia Neal’s loss of ability to walk or talk after suffering three burst cerebral aneurysms. Or Anne’s creeping paralysis after suffering a series of strokes where she is nursed by her loving husband Georges – but sometimes even love finds its limit!

In the Sci-Fi thriller In Time the currency in common usage is time. In this world of genetically modified humans, when everyone reaches their 25th birthday they are given 1 year and when the clock reaches zero they simply drop down dead. The upside is that you stop physically ageing at 29 so the world is filled with beautiful young people. They can earn, beg, borrow or steal time to increase their longevity but everyone needs to 'spend' time simply to live - a cup of coffee costs 4 minutes for example. Catching the bus becomes a whole lot more treacherous!

No survey of this area would be complete without at least a passing reference to suicide – one of the most cruel and painful forms of loss. Harvard Medical School observes “People bereaved by a suicide often get less support because it's hard for them to reach out — and because others are unsure how to help.” This is something which features in many films and I’m sure you have you have your own list. Here’s some that I came up with: Dead Poets Society, The Virgin Suicides, Shawshank Redemption, What Dreams May Come, Harold and Maude, Milk and of course the suicide of Virginia Woolf in The Hours.

In that last piece I mentioned What Dreams May Come which is a film many people like. If you remember, it’s Robin Williams at his schmaltzy sugary best as he plays Chris Neilson who dies and finds himself in a heaven more amazing than he could have ever dreamed of. There is one thing missing: his wife. After he dies, his wife, Annie committed suicide and went to hell. Chris decides to risk eternity in hades for the small chance that he will be able to bring her back to heaven. For those that have seen it, what do you think?

For those who haven’t seen it I have some advice – don’t waste your time!

On imDb.com, on reviewer going by the name Skydancer says this.
“Seriously Spiritual

I don't know how some of the comments can state that it is New Age Kitch. The concepts in this movie is 100% spot on with the new way of thinking in just about all progressive belief systems.  A heaven which we create based on our own dreams and reality. A hell where we place ourselves in contrast to being sent here by a despotic God. The concept of coming back to live another life. These are not concepts that are way out. They make the basis for the majority of the religions in the east and therefore the majority of the world population.  Christianity has also moved very close to this.  This movie MOVES me every time I see it. If you are in any way concerned about the greater plans in the universe, watch this.

For those who haven’t seen it, here’s a high calorie trailer. If you want a more intellectually engaging encounter with this theme, I would heartily recommend the film based on the novel Solaris by Stanisław Lem – either the original or the George Clooney remake!

The 2010 film Inception is another film that requires much thought when watching it. To make sense of it, you need to know that there are 5 levels of consciousness. Through the I-V administration of a sleep drug, people can be taken into deeper states of consciousness that are vivid and real and in which time passes more quickly the deeper you go. Ostensibly Inception is a film about con tricks that use dream states to lure information from industrialists. However, the central character Cobb also uses the technique to release his wife who had died and is trapped in the lowest state of consciousness – limbo.

As the film climaxes, the editing cuts between the five levels one after the other as things happen at different rates of speed within each level. Here’s a chart I found on the web at cinemablend.com (http://www.cinemablend.com/new/An-Illustrated-Guide-To-The-5-Levels-Of-Inception-19643.html) that might make things clearer – or not! 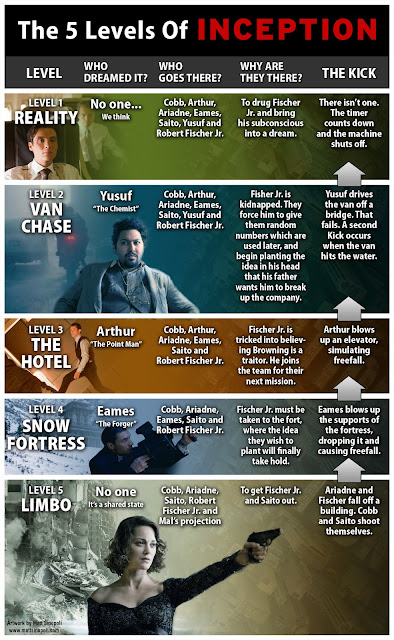 Anyway, here’s a clip where we see things happening on the five levels. To awaken from the induced sleep requires a trigger – often something physical, so why not throw yourself out of a building – it’s only a dream. Or is it? Cobb has a clever way of determining whether or not where he is, is real or one of the dream levels – he spins a top. In the real world it will lose momentum and eventually topple. In a dream level, it will spin forever.

One thing you need to know is that because Cobb has been naughty, he is persona-non-grata in the USA. In this clip, Saito makes a phone call – a suggestion planted in his mind in a dream – the test of whether or not the plan has worked will come at the immigration desk at the airport. Here’s how the film ends.

Or is it? Those who upped and left before the credits ended missed out on seeing what happened to the top – did it fall, or did it maintain it’s composure and keep spinning? Well, that would be spoiling the ending if I told you! All of this to put right the loss of his beloved wife Mal trapped in limbo.

Losing things can be a powerful source of motivation. But can you lose something you never had in the first place? Pleasantville is a very nice little film about bringing life, joy and colour to a dead, joyless and monochrome world.

What about something way out and whacky? This film certainly fits that bill and I would urge you to undergo colonic irrigation rather than sit through You, Me and Everyone We Know which is, as I said, is distinctly odd. Look at this.

In choosing where we have journeyed in this introduction I have used a lot of films I like and I am aware that I’ve used quite a few Science-Fiction clips and sci-fi is not everyone’s cup of tea! I’ve also included some films I’m not a fan of!

I’m aware that we haven’t explored the theme of being lost or cut off which might have taken us to films such as the classic 1950 Treasure Island or the more recent Castaway or The Way Back, or the current Life of Pi. Another major area of loss we’ve not explored is that of relationships where we might have looked at Indecent Proposal. Divorce is another area where we might have considered films like Kramer Versus Kramer, or The Squid and the Whale or The Parent Trap.

Loss of rights presents another broad vista on which could have played films like Gandhi, Erin Brokovich and Local Hero. Loss of sanity might have led us to One Flew Over the Cuckoo’s Nest or Seven or Silence of the Lambs! I have managed to stay away from loss and death inflicted by war – that area can provide a nuanced and enlightening encounter through films such as The Deer Hunter, War Horse, Schindler’s List and as I mentioned in your pre-course instructions, Saving Private Ryan - the last three titles being Directed by Steven Spielberg!

We could go on and on, but it’s time to draw things to a close. We began with a clip from Bucket List so it seems fitting to conclude with a clip that illustrates our awaiting decrepitude.
The end!