An interesting list from those very nice people at Moviemail. Check it out here. How many have you seen? What would you add to your top 10?
Posted by Duncan Strathie at 12:17 No comments: 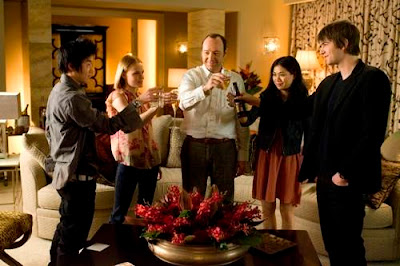 Set within the campus of the Massachusetts Institute of Technology (MIT) and the gambling halls of Las Vegas, this crime drama moves with a gentle pathos that draws you as the characters evoke feelings of sympathy and revulsion. It is a film about many things, among them giftedness, vulnerability, abuse, greed, vengeance, betrayal and coming of age.

The central character is the hard-working and gifted MIT student Ben (Jim Sturgess) who achieve almost perfect grades as he works his way towards Harvard Medical School. He lives with his widowed mother who is equally hard-working - a picture of familial harmony. Ben pursues a full scholarship for Med School but is up against stiff competition - otherwise it costs $300,000 - money he doesn't have.

In a maths class Ben reveals his exceptional ability and impresses his Professor Micky Rosa (Kevin Spacey). Rosa draws him in to be part of an elite and illicit group that he trains to play Blackjack to win - by counting the cards and using maths to calculate probabilities of the cards left in the undealt deck. The mathematical principle of 'variable change' features as a repeating refrain throughout the film and even delivers the twist at the end!

Rosa takes his team to Las Vegas and gives them the means to play the tables. They make tens of thousands - Rosa takes 50% of the profit and the rest is split 5 ways. Ben gets well on his way to accumulating the £300K he needs for Med School. Unknown to the team, the Casinos employ security analysts to look out for dodgy practise and the net tightens around Rosa and his gang.

There are several sub-plots that run and provide a richer encounter with the story. Spacey is compelling as the controlling and abusive Master of Greed and the ensemble cast playing the other members of the team all turn in compelling performances. The narrative arc finds pleasing fulfilment and delivers a just outcome after so many injustices.

This is a good story to observe temptation, greed and restraint playing out. It's a pleasing and engaging film - one to cuddle up with on the sofa and enjoy a bowl of popcorn. I'll give it 7/10.

Posted by Duncan Strathie at 13:46 No comments: 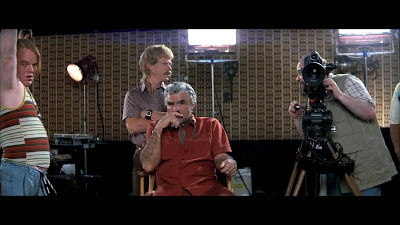 This film has been on my 'to watch' list for a long time simply because it is a reference point for so many reviews of other films. The film oozes a warm nostalgia for the 1970's - it's look, sound and colour palette evoking the heady days of sunny optimism that seemed to characterise the period.

The central character is Mark Wahlberg's Eddie whom he renames Dirk Diggler - the film could easily have been entitled 'The Rise and Fall of Dirk Diggler'. Dirk is a High School drop out who is spotted washing dishes in a club. Horner sees his potential and lures him into the world of porno films where he quickly becomes a star. In this world he finds the family, love and warmth that are painfully absent at home which is ruled by his cold and domineering mother who bullies his cowering father. In Horner he finds a new father figure and in Horner's partner Amber Waves (Julianne Moore), he finds someone who wants to be the mother of everyone.

The ensemble cast also boasts Don Cheadle whose has-been character is always concerned about his image and is driven to open a Hi-Fi store, Heather Graham who plays the leggy Rollergirl, William H Macy as the impotent and wimpish Little Bill and John C Reilly who plays Reed Rothchild. For me the star turn is given by Philip Seymour Hoffman as the the camp and dreamy Scotty J. With Philip Baker Hall also making an appearance it felt like a casting session for Director Paul Thomas Anderson's Tour-de-force Magnolia which was to follow two years later.

As I said, this film's narrative arc enables the characters to try to address their insecurities and dreams. It is about power and exploitation, it is about hedonism, narcissism, choice and the consequences of choices made - or not made. Technological innovation also allows Horner to ponder the impact on his 'creativity' as video tapes threaten to push out film as a production medium. Horner is the anchor at the centre - not only for his actors and their entourage but also for his producer The Colonel, and others in the industry. We never see him drunk or doing drugs - or engaging in sexual activity and he only loses his self-composure once.

Posted by Duncan Strathie at 11:12 No comments: