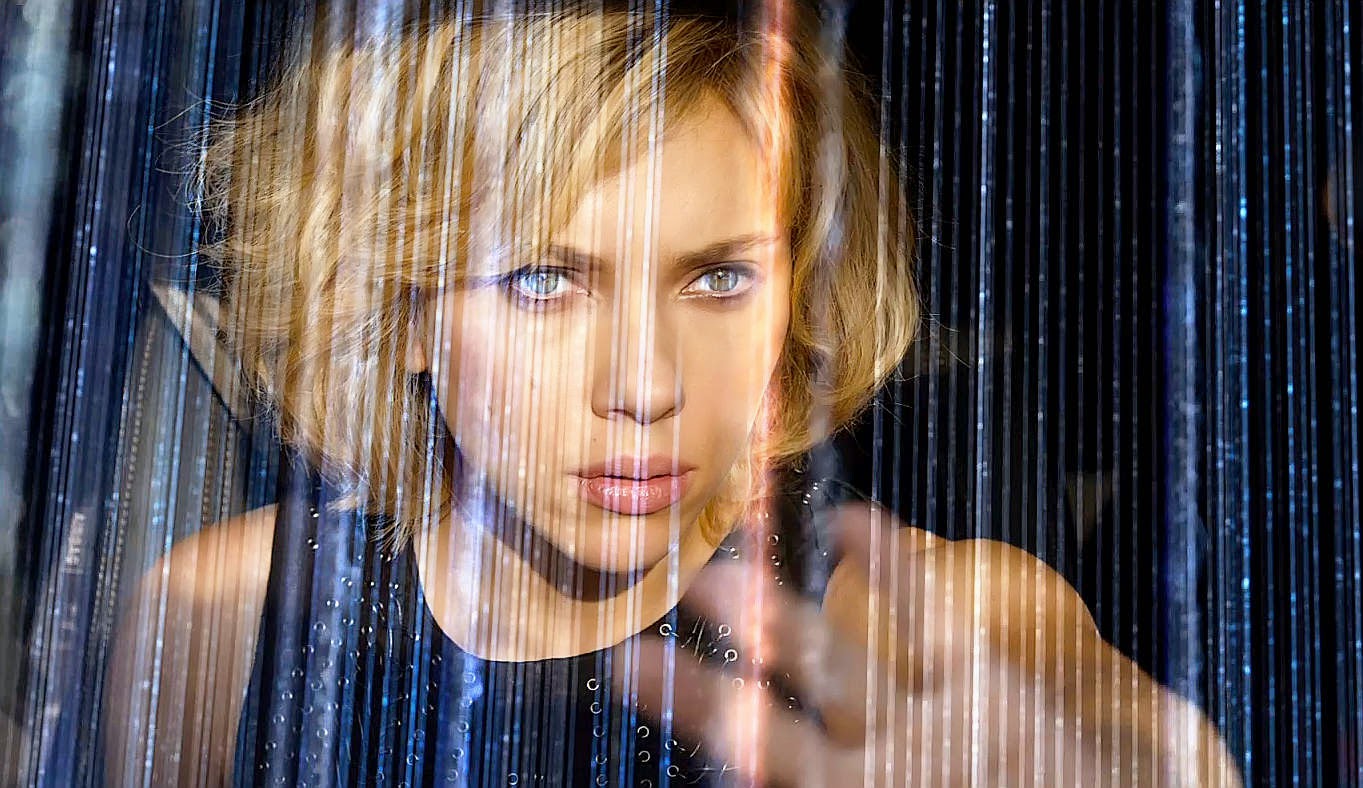 On the face of it, this is a simple action thriller that begins in Taiwan and ends in Paris - it is after all written and Directed by Luc Besson, so Paris much feature somewhere. If you choose to dig a little deeper this is a film that explores metaphysical themes in an easily accessible way - a bit like The Matrix meets The Tree of Life meets Limitless. However, for me the ease of access is too dominant and rather than some meaty philosophical exploration, all we get is a series of cliches and some nice images that look as though they are lifted from Tree of Life with a small homage paid to 2001: A Space Odyssey.

For this to be explored by Scarlett Johansson as Lucy and Morgan Freeman as Professor Norman is an odd mix. Both play their roles very well and it is good to see Johansson's versatility. However, given the subject matter of the film and the way it is explored, I kept expecting to see Freeman in a white suit in the God role!

I won't spoil the plot but the basic premise (as the trailers and ads amply demonstrate) is that Freeman's life-long research into releasing more than the 10% of cerebral capacity that humans use, collides with Johansson's character who achieves the Nirvana of using 100% of her brain. With super-enhanced sensory acuity, Lucy nicely distills the essence of her new-found knowledge by sharing with Norman "We've codified our existence to bring it down to human size, to make it comprehensible, we've created a scale so we can forget its unfathomable scale." In doing this she defines the one true unit by which everything should be measured.

There is plenty of brutal kick-ass action in this film with Chinese gangsters seemingly able to arm themselves at will with a bewildering array of weapons. Every now and again the flow of the dialogue is interrupted to enable the meaning of what is happening on screen to described by words just in case we can't understand for ourselves - doh! The ending however, was anything but staid and predictable and for me it opened up a whole new set of questions - perhaps there'll be a sequel. As an action film this is okay, as a philosophical exploration of the meaning of life, it does make you think - just a little, but it is very lightweight - I'll give it 6/10. 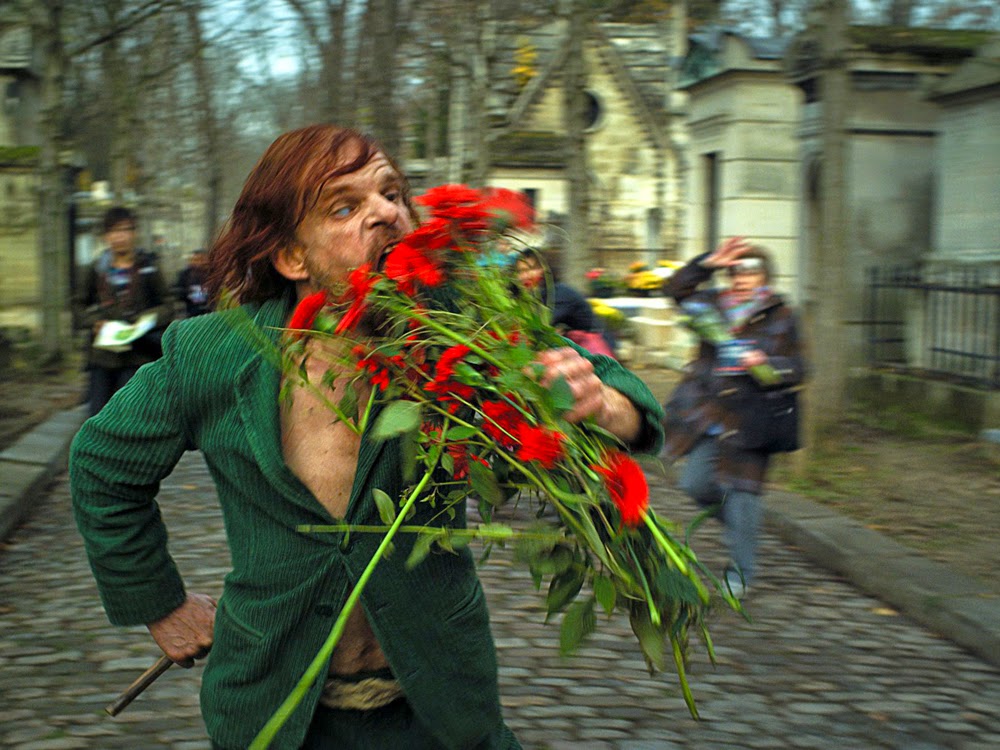 Well - where to begin with this one?

To say it's French would be a beginning! This film defies rational explanation. The only conclusion I can reach is that the way this film is presented is in a large part also what it is about. It seemingly has no discernible plot or point. If you watch films to enjoy a beginning, a middle and an end this will not satisfy you. If you like narrative arcs this will get your brain turning summersaults to try and work one out.

Monsieur Oscar (perhaps a clue in the name?) spends his days being chauffeured around Paris by Celine in a white stretched limo. The limo is equipped with a wide variety of props, costumes, prosthetics and make up. As the day's journey continues a series of dossiers magically appear to describe the next character and act Monsieur Oscar 'perform'.

There are no visible cameras or audience but a visual clue comes from the opening scenes where someone awakes (or do they) from sleep and encounters a motionless cinema audience watching a film. The only movement comes from a large dog and a child wandering the aisles.

Monsieur Oscar plays nine different characters, all of them quite different. Who commissions these 'performances' is unclear. The fact is that this film is about the ordinary-ness of life and the things we do as part of out daily existence. It is about the masks we wear and the personas we adopt as evidenced by what Celine does at the end of the film (I won't spoil it for you). And what of the title? Is this a film that explores metaphysical themes?

So if you want to a see a banker, a wealthy man dying, a flower-munching, trash-hoarding Monsieur Merde, a rabid-looking sewer creature and a old beggar woman and Oscar killing himself among others, then this is for you.

This film is very different. The images are very graphic and take the viewer on an excursion across a variety of unfamiliar landscapes all within the familiar cityscape of Paris. I've been wanting to see this for a long time. I'm glad I have. I'm not in a hurry to see it again! For me it tries too hard to say something that doesn't really need saying. You'll either love it or hate it. I'll give it 4/10.

Posted by Duncan Strathie at 22:21 No comments:

Email ThisBlogThis!Share to TwitterShare to FacebookShare to Pinterest
Labels: life 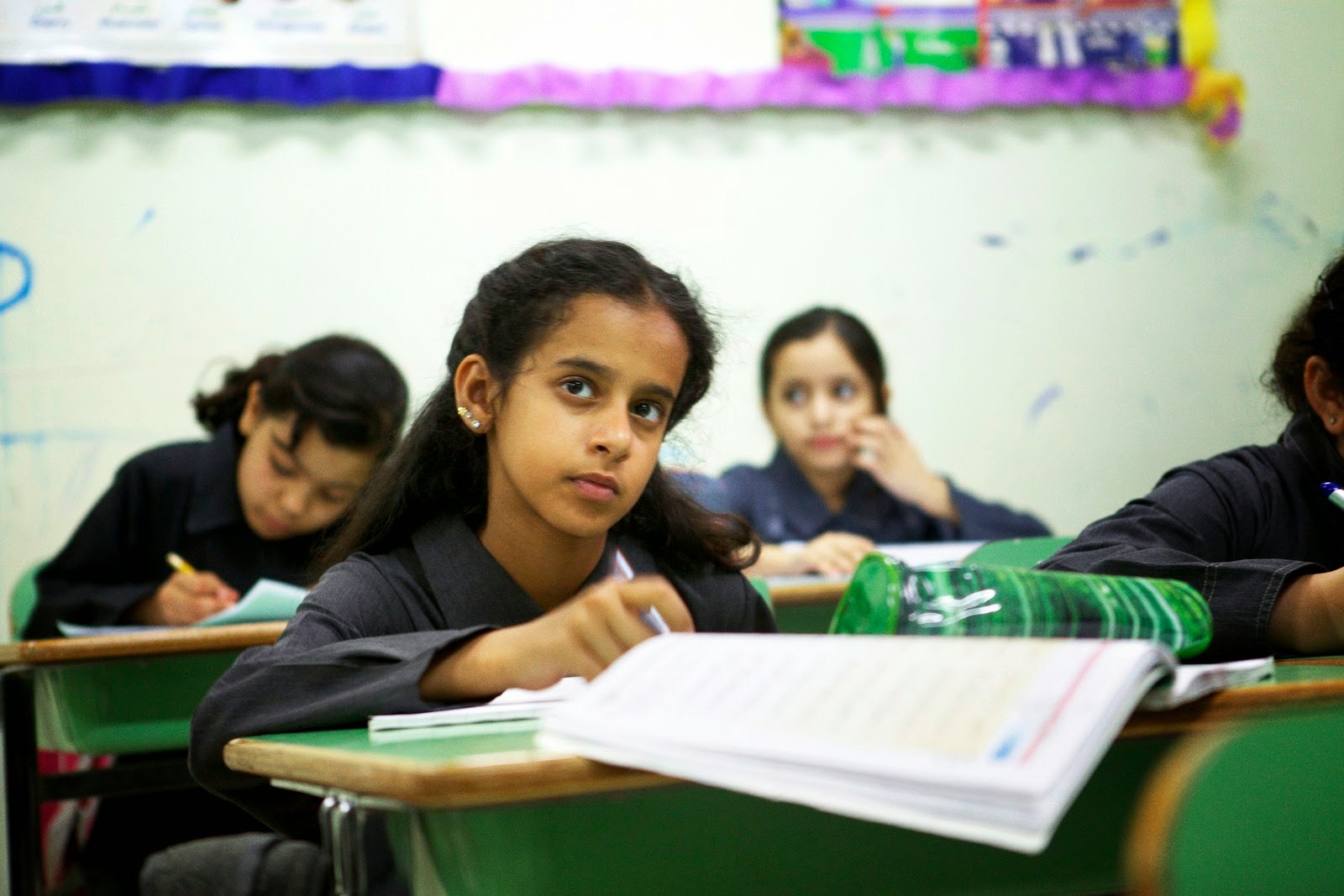 Films that make social, religious, political or gender based points are seldom good films. Wadjda breaks that mould - spectacularly, scoring big hits in every category. It is also a very good film that tells a simple story very effectively with two young Saudi's in the lead roles. The film doesn't preach - it gently subverts, asks questions and undermines the status quo in one of the world's most ruthless autocracies. It offers a different way of being - not the threat of revolution but an alternative to the existing model. Whenever we view a culture that is so different from our own we must be careful as we don't necessarily understand all that is going on. The reference points will be different, the social givens will be difficult to understand and it is always too easy to jump to wrong conclusions. However, this film contains a sufficient number of universal ideas and metaphors that much can still be gleaned. At the end of the day, our common humanity is a greater force for togetherness than our different belief systems are a force for conflict and separation.

Shot entirely in Riyadh, Saudi Arabia the film is a 'coming of age story' that charts part of that journey through the eyes of the title character - a 10 year old girl. She lives with her mother with occasional visits from her father who is climbing the political ladder and desperate for the male heir his wife cannot (medically) provide. The daily routine of life in the Madrasa, the strict dress and behaviour codes of sharia law and the overbearing patriarchy that predominates set Wadjda on a collision course with school, society and family.

Her mother desperately wants to break free but is afraid. Wadjda has no fear - only a sense of wanting to be free to be herself - a normal aspiration for a 10 year old pushing the boundaries and making meaning of the world around them. She has no interest in Islam and therefore cannot see the point of the strict codes that de-individualise her. She enjoys playing with Abdullah - a boy of the same age. They have a love/hate relationship so typical of that age group that always heals itself and comes back to love (filial). For Wadjda, Abdullah expresses his male dominance through cycling everywhere - an activity forbidden to women as it would compromise both their virtue and virginity. She is competitive and wants a bike of her own so that she can race him - and win! I won't spoil the story line any further except to say that her quest for the bicycle and the means she employs in pursuit of it becomes a metaphor for the wider questions the films asks.

It is amazing to think that the authorities sanctioned the production of this film that could have been shot in a more welcoming Arab location, only to ban it from being screened in Saudi. Those nice people at MovieMail have put together a great graphic: 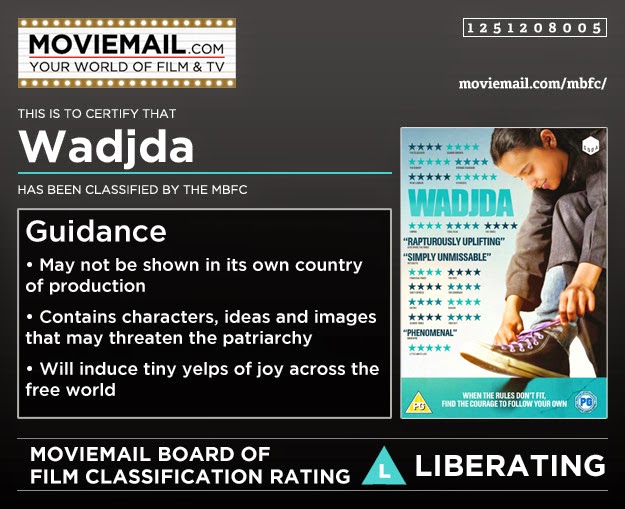 As it says this is a liberating film - filled with laughter, fun and hope. It can only be a question of time before successive generations erode the conservatism sufficiently to allow those who wish, to express their personal and national identity in a different way. Hopefully there will be room for those who wish to continue practicing a more conservative form Islam to continue to do so - but alongside those who choose a different style or pathway.

This is a heart-warming film with great acting and a powerful story to tell. It is also a story that asks many questions and points a possible way to the eventual evolution of Saudi society. If you enjoy a good story, well told and filmed with compelling acting which is set in a culture which is very different to most others then do get hold of this and watch. I'll give it 8/10

Posted by Duncan Strathie at 23:02 No comments: