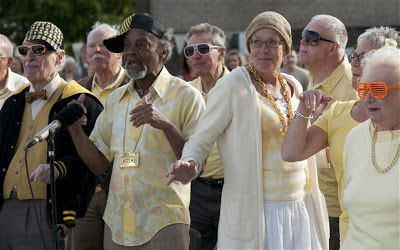 On one level, the trailer sets up what to expect with this film - and it delivers exactly what it it promises. This is tear-jerker of an emotional roller coaster in the ''this is gritty England' style of The Full Monty, Brassed Off, Billy Elliot and Calendar Girls. In many ways it is formulaic and you know what's coming - but then so is a Manchester United counter attack as a ball headed out from a corner is picked up Carrick who puts it through to Van Persie who plays in Rooney to score with a total of only five touches. It is no less wonderful, beautiful, uplifting or poetic, simply because it follows a formula!

What adds to the strength of this simple story of complex truths is the strong acting of the four leads - Gemma Arterton who plays Elizabeth, Terrence Stamp who plays Arthur and his wife in the title role of Marion, Vanessa Redgrave, and also their son James played by Christopher Eccleston.

The story is quite simple - but how it is portrayed is anything but. This is a powerful drama about families and relationships, about self-imposed expectations, about love, realism, pretence, regret and forgiveness. It is also a film that opens a door on what it is to have life and to live it to its fullest potential.

Arthur is the pivot around which the others revolve. He is retired and devoted in a very dutiful but undemonstrative way to his wife Marion who has cancer. He doesn't disclose how he feels and is as hard on everyone else as he is on himself. He has never felt it necessary, or been able to build a relationship with James his son, who struggles to run his business whilst bringing up his daughter as a lone parent. Marion loves Arthur - despite his gloominess and almost constant state of seeming depression. Arthur's only respite from caring for Marion is a Thursday evening visit to the club for dominoes and a beer with former colleagues.

Marion draws encouragement from her membership of a choir which is led by the charming and talented Elizabeth - a music teacher at a private school. Marion is in turn an inspiration for the other members of the choir - something which Arthur cannot understand as singing is close to doing something enjoyable! Following Marion's death, Arthur allows Elizabeth a little closer and they develop a platonic relationship. Everyone struggles with their grief - particularly James and Arthur in their different ways. James is trapped by his need to work to provide for his daughter. Gemma is so wonderfully attractive you can understand her frustration in not being able to sustain a meaningful relationship with a man. Arthur and Marion had each other - until Marion's death and then Arthur is left with a void that is unfillable.

Perhaps many of the things that characterise Arthur and his relationships are products of the generation born during WWII and the in the years just after - times of deprivation, of biting the bottom lip, of simply getting on with life no matter what you felt. The social observation in this film would make Ken Loach proud! James and Elizabeth are of a different generation who have different values and goals. The way in which everyone's respective journeys are all mapped out is a masterpiece of storytelling which weaves a rich and fulfilling fabric depicting the highs and lows of life, the things that matter and the things that make life worth living.

I think this film is a gift - another one exploring themes of people in the older years of life. It also explores themes of loss and bereavement that would encourage a discussion on these areas. If you can, do go and see it. I'll give it 8/10. 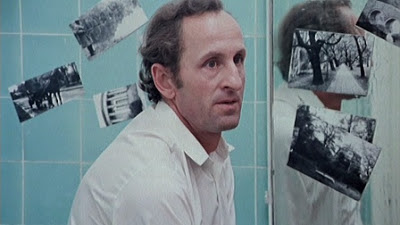 I am a fan of the Polish Director Krysztof Kieslowski and so watched this - his feature debut - with interest. Made in 1976 it chronicles, in a docudrama kind of way, the decision to build a massive synthetic fertiliser factory in the forgotten and underdeveloped old town of Olecko close to the Russian border. The film offers an insight into Polish socialism of the Soviet era which is grittily realistic and which should serve as a stark warning to anyone who thinks this style of social ordering will be Utopian. I found the images and themes resonant with distant memories of my teens - part of the soundtrack I grew up with.

The film's story is sandwiched between two important political events 20 years apart. In 1976 Bednarz' wife was a local party official who, in firing a teacher unleashed an undefined scandal in a period when social unrest was challenging the status quo. Now 20 year's later, Bednarz has been chosen by the Party to be the Director of a massive new factory and the the new town that will be built to house its workforce and their families. Bednarz' wife refuses to return to the town with him and remains in Silesia. Their daughter still lives in Olecko but has little direct contact with her parents preferring to live a life of freedom and seeming promiscuity.

This is social engineering on a massive scale. It is clear that the local party officials want the plant at any cost and decide that it will occupy the site of an ancient forest. The locals protest and are overruled. The local leader angles for the Directorship of the project and is spurned by the national heavy-weights who want to install their own man and loyal party member - Bednarz. Not only is the project ill-conceived - it's location is poor, the tainting of ancient Olecko sets the locals against the project, the pollution the factory emits is widespread and highly toxic, the factory is poorly built and soon begins to crumble - it mirrors the development of Bednarz' own life and his deteriorating relationships with his wife and daughter. In this respect, the film is well titled.

In Poland, 1976 was an important year as it saw the first protests by workers which went on to become the fore-runner of the Solidarity movement born in the shipyards of Gdansk in 1980, which in turn pushed the country slowly and inexorably towards its break with Soviet Russia. It seems Bednarz' conscience is pricked by the way the Party planning process imposed the factory on the local community and the way it treats the locals. He bravely goes out to address the striking throng at the end of the film and offers them his support. Perhaps this is genuine or perhaps he is glad of the chance to make amends for his failure to more fully back the 1976 uprising 20 years earlier and so vindicate his wife.

Overall this is a bleak film. Most of the time the colours a bleached and there is very little warmth in any of the characters - the Party machine trundles on deploying a multiplicity of hierarchies who convene in endless cycles of meetings to discuss workers' ideologies and production targets. The new housing and other social provision is not seen as advancement by the residents of this previously primitive and underdeveloped town as economic refugees flock to the town looking for work and accommodation. The story is punctuated by slowly panned shots of the bleak landscape accompanied by the soundtrack of industrial machinery which is both visually and aurally jarring in a 1970's avant-garde kind-of-way.

The real casualties are the people. The local residents, the workers, the party activists seeking status and advancement, Bednarz, his wife and daughter. There are no human winners here. The film presents a human-less machine called the Party which imposes its will unthinkingly and arbitrarily on the citizens and comrades of Poland. This is a brave film - particularly when we note that it was made in 1976 whilst Poland was still in the grip of its Soviet neighbour. Kieslowski's first feature laid a solid foundation for the films that were to follow - films that explore what it is be, find meaning in life and enjoy fruitful relationships. It is good to be reminded periodically of a world that existed not so long ago - just in case we might ever be tempted by the kind of Utopia it pretended to offer. I'll give it 7/10.

Posted by Duncan Strathie at 08:10 No comments: 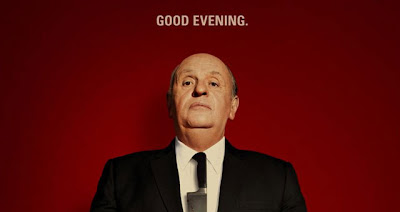 This film opens as if it were an episode of Hitchcock’s short-lived television series, 'Alfred Hitchcock Presents'. Hitchcock (Anthony Hopkins) talks directly to camera as he delivers a prologue to set the scene. Hopkins delivers a wonderful performance - his physique, bulk and over-deliberative intonation present a wonderful derivative Hitchcock - more the legend than seeking an accurate representation.

This film seeks to entertain rather than inform and is a bit tongue-in-cheek. Rather than a straight portrayal of the making of the film, every now and again the narrative departs into a dialogue between Hitch and Ed Gein - the Wisconsin farmer who was the serial killer that served as the inspiration for Robert Bloch's character Norman Bates in his novel on which the film Psycho, was based. Through this dialogue, Hitchcock deals with his own demons and delusions, his obsessions with his blonde leading ladies and tensions with his wife Alma. It's a little odd - but definitely Hitchcockian.

There are more strong performances from Scarlett Johansson as Janet Leigh, James D'Arcy as a very camp and conflicted Anthony Perkins and Toni Collette as Hitchcock's long-suffering secretary Peggy Robertson. The film exposes the control of 'The Studios" and demonstrates how far 'censorship' has come in 50 years. Where will it be in 50 years time?

Hitchcock die-hards will probably feel a little cheated by this film as some of the details won't be 100% accurate - but this is not a history lesson, it's entertainment - this is Hollywood. If you want some gentle entertainment with good acting then this will do very nicely. If you want the Hitchcock experience then get hold of a copy of Psycho, a nice strong drink and allow yourself to be challenged, surprised and scared all at the same time. I'll give it 7/10.

Posted by Duncan Strathie at 19:29 No comments: