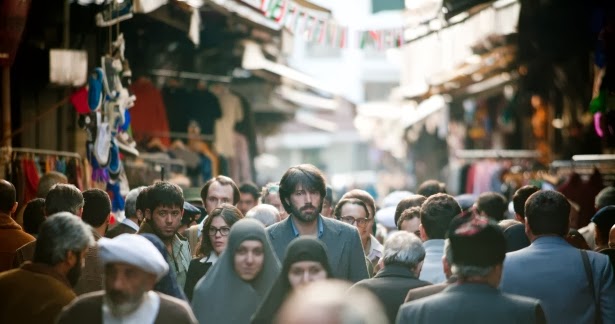 For anyone who remembers the Iranian revolution and ensuing hostage crisis that dogged President Carter and hemorrhaged support for his presidency, this film will offer a valuable insight into the tensions and thinking that prevailed at the time. For those who are too young (or have forgotten) it will offer a useful and entertaining history lesson. It is also a very good film - for the most part.

I didn't rush to see this in the cinema when it came out as I had some preconceptions that meant that watching it didn't feature high on my 'to do' list. I was glad to catch up with it on disc. Directed by and starring Ben Affleck this film, 'based on a true story', portrays Hollywood coming to the aid of the CIA. Any Hollywood film about Hollywood runs the danger of being over-charged. Add to that a large dose of American patriotic jingoism (particularly towards the end) and you get Argo.

The premise of the film is straight-forward. When the American Embassy was stormed by the mob in Tehran in 1979, six employees working in the visa section managed to escape and lay low in the residence of the Canadian Ambassador. Affleck's character, CIA exfiltration expert Tony Mendez dreams up the unlikely plan to use a trip scouting for a movie location to extract the six from Iran.

This was a plan that was so bizarre it bordered on genius. When President Clinton declassified the file and it became public knowledge, the world learned of how the CIA bank-rolled a Hollywood office to give credence to the film's existence and so provide the necessary background to make it look legitimate. What is refreshing about the film is that it is all about the story - no romance or personal violence to distract - and that it is filled with believable characters and good acting. Argo won three Oscars and two Golden Globes. Today it scores 96% on the Tomatometer and 7.8 on IMDb.

Anyone who has travelled in this part of the world will have felt the hairs on the back of their neck rising whenever the group encounter officials. You know that at any point your progress can be halted and you can taken away to some forgotten place never to be seen again - and that's when your papers are in order and your reasons for being there legitimate! I felt the two hours passed by quickly - the film is very evenly paced and doesn't linger. Overall it maintains the tension very well and even though we know the outcome, peril persists until the plane passes out of Iranian air-space and the alcohol breaks out to allow a timely celebration.

This is another film that shows the reach and power of the CIA and the failure of American foreign policy. The blend of archive news and documentary footage within the film is done really well as is the period setting of the 1970's - everyone wearing huge framed spectacles and butterfly collars. It was good to see Swissair taking to the skies again!  I enjoyed this film and was happy to have my prejudices largely overturned - pity about the schmaltzy jingoism. I will award this film 8/10.

Posted by Duncan Strathie at 10:31 No comments: