What movies, if any, do you find hard to watch? 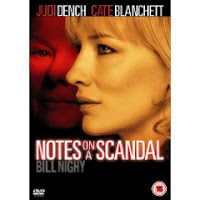 I don't mind blood and gore quite so much, although acts of utter violence are hard to stomach. I'm a great fan of Tarantino's story-telling - even if that does invlove lakes of blood. With adavances in CGI and green-screen technology, it's easy to say that most action in movies these days is camera trickery.

The real danger in allowing ourselves to be fooled by that stance, is that we find it easier to explain away the violence that happens to the characters in a story - we desensitise ourselves and so violence inexorably becomes okay and part and parcel of everyday life. So whereas films like Star Trek, Kill Bill and even No Country for Old Men are emminently watchable in my eyes, why do some 'straight-forward' dramas casue me real difficulty?

I really struggle with movies such as Notes of a Scandal even though it has stunning performances from Cate Blanchett and Judy Dench. I struggled to make it to the end. One film I couldn't watch to the end was Closer even though it had an all star cast (including Natalie Portman who usually gets my full attention). It is thie kind of violence done in these films that I find I cannot watch. Deceit and the abuse of power within relationships are things I find really hard to deal with. (Before anyone gives me the number of thier shrink - I am married to one!)

I wonder what kinds of films others find difficult to watch and why?
Posted by Duncan Strathie at 11:17

Hi! I found your blog through a link on Jonny Baker's.

I became a mom a few years ago. I have always cringed at violence in films, but not stayed away from well-reviewed films just because they are violent. After having my son, I am MUCH more sensitized to even fairly minor voilence, and I have terrible trouble with movies with children in danger. For example: I loved a good deal of Slumdog Millionaire, the way it was shot, the way music was used, most of the performances - but I found it so harrowing that I almost left several times. (I'm glad you wrote what you did about The Girl With The Dragon Tattoo - I don't think I'll see it, though I may read it.)

We're about to start a "God in the Movies" series at the our church.

Betsy - a thousand apologies for taking over a year to respond! I don't think I was alerted to your message. Thanks for the comments - helpful. It's always a challenge to know which way to call things but I try to be led by instinct and truth.

I am due to visit the Sates next April/May on study leave and was wondering if it might be possible to meet up. I'd be very interested to see what you and CRCC are getting up to these days.