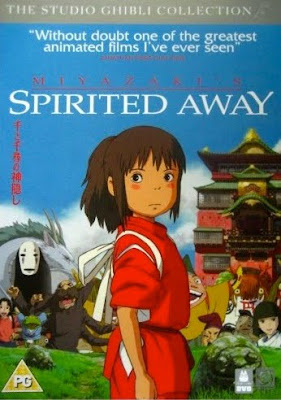 This formed a members free screening double-bill (with Ponyo) at Harbour Lights on Sunday - great value. If you live anywhere near Southampton do check it out and join!

I had seen this a couple of times before, but watching on the big screen presented the narrative and images in a very different way - more engaging, and again I was drawn in. Spirited Away is Japan's biggest grossing film at the cinema of all time. This is important as it underlines the resonance of the themes dealt with in the film. I am largely ignorant of Japanese culture and the prevailing Shinto religion, but it was clear to me that the motifs portrayed in the film represent a blending of present and past, of spirit and reality, of traditional values and contemporary revisions to them. I urge caution in being too interpretive when I know so little of the culture the narrative speaks from and to. At just over 2 hours long, it is perhaps a little too long - but obviously not for a Japanese audience. This is clearly a 'coming-of-age' story as Chihiro battles with the uncertainty of moving from the familiar to the unknown.

Chihiro is a spoilt 10 year-old girl travelling by car with her parents to their new home. Her father takes a wrong turn and tries a short-cut through a forest. They end up at what looks like an abandoned Theme Park. On exploring the park - which gives Chihiro the creeps - they discover a stall of freshly cooked food. The parents tuck in enthusiastically while Chihiro refuses to eat and goes off to explore. She meets a boy named Haku who seems disturbingly familiar. He advises her to leave with her parents immediately - before darkness comes and the spirits who inhabit this world come to life. Chihiro returns to her parents who have eaten the entire stall's-worth of food and have transmogrified into pigs! Chihiro tries to escape but the way back to the car has been transformed into a huge river that now blocks her path. Haku offers to help her.

Haku leads her to the bathhouse for the gods and tells her to go to the boiler room and ask for work from the six-armed boiler man Kamaji. Her persistence pays off and she is helped by Lin an older girl working in the bathhouse who helps her meet Yubaba who runs the bathhouse. Yubaba eventually gives her a job but takes her name and renames her Sen to ensure eternal slavery.

Haku, who was originally a spirit dragon is similarly enslaved by Yubaba. He is sent on a mission to steal a magic seal from Yubaba's twin sister Zeniba. The seal causes Haku to become ill and as Sen forces him to cough it up, Haku also coughs up a little black slug thing which she squishes under-foot. It turns out that this was the embodiment of a spell Yubaba had put on Haku to ensure she retained control of him.

Sen, accompanied by No-Face, a spirit she has befriended form the bathhouse, Boh, Yubaba's gigantic baby son now turned into a rat and Yubab's pet raven, now a fly, journey's to Zeniba in a bid to gain freedom and end the dominance of Yubaba. Zeniba is a lot friendlier than might have been anticipated and tells Sen that her love for Haku has broken the spell that kept Haku captive. Zeniba and Sen's friends make Sen a special hair band to show her that her friends are with her, as well as for protection. Haku arrives to take Sen back to the bathhouse. No-Face is offered the chance of staying with Zeniba which he accepts. Haku explains that Yubaba will set Sen and her parents free in exchange for Boh.

As Sen, the rat and the fly ride on Haku the dragon, Sen realizes that Haku is the same river spirit that saved her as a small child when she fell into the Kohaku River, and the realization helps to break Yubaba's control on Haku completely. Sen is set a further test by Yubaba to get her parents back which she passes. Haku accompanies her back to the entrance to the spirit world and tells her that her parents are waiting on the other side. She is told not to look back or else the deal is off. Sen, now restored as Chihiro rejoins her parents who walk back to the car covered in dust and foliage to indicate the passing of time. Chihiro still has her hair band in place which indicates that it wasn't a dream as her Alice-in-Wonderland type experience remains real in the real world.

I won't pretend I know enough to try an unpick what the film alludes to in Japanese tradition and understanding of the spirit world. There is an interesting piece in Wikipedia that's worth a look.
Posted by Duncan Strathie at 08:32

This is interesting, but I still do not understand the meanings. This is more of a summary. What I want to know is how did people like Lin end up there? How did Haku come to Yubaba in human form, if he was a river spirit shaped as a dragon? I would appreciate it if you found out the answers to the mysterious questions, or at least stated some meanings.
Thank you.

Oh, and why wasn't Chihiro allowed to look back when she left the magical city?

Haku saved chihiro/sen as a young girl when she fell into 'him' - him being the spirit of the river back then - by carrying her back to shore. By remembering him and telling him his real name she freed him from yubaba.

Chihiro wasnt allowed to look back as it would shatter the illusion of her escape. Her freedom. by looking back it demonstrates a certain weakness, an inability for her to cope now on her own without the aid of the spirits and bathworkers she had befriended. By continuing to move forward and not look back, she leaves the past willingly behind and looks to the future instead.

lin and the other workers are all spirits of some sort that have made a deal with yubaba and therefore must remain working at the bath house until they are freed.

Haku appeared as a human because that was what chihiro required. From the beginning he was there to help her, to comfort her. to act as both her guide and friend. That is why he appeared to be human - purely for chihiro's sake.
It's a bit funny to think but their relationship wasnt really one of romantic love or brotherly love...it was somewhere in between the two. they have been connected ever since she 'fell into him' as a child back when haku was a river.they needed each other to be free.

this... is just a summery. it doesn't tell me anything about the meaning at all...

Well i won't pretend to have fully understood the film either but here is my general view.
The whole film is about transition into maturity and balancing the different aspects of one's personality.Everything is purely symbolic so asking question's about the other characters is probably wrong because they actually represent different parts of Chihiro. Some of them are obstacles she has to overcome (e.g Yubaba) and some to support (e.g Haku) in order to become a better person. Her experience is rough in the bath house. If fact the situation closely resembles working in a brothel (such bath houses actually are related to sex services in Japan as far as i know). Think of the filthy customers she has to serve which again are symbolic for bad pieces of her own character. In the end he manages to transform all those into better forms altering herself in a more mature person that is now better prepared to face life.
Think of the last line: "I think i can handle it".

this was a great movie sometime i wounder if thing like this are even reals in this crazy world we live in..ma only question is how did that older girl lin i think her name was get in there and is he human too?

http://circleofmeditation.wordpress.com/2011/04/18/spirited-away/
Check out the link for the deep meaning of the movie.

Thanks anonymous. This explanation from Manuel Vega is spot on - very helpful. It demonstrates that what on the face of it is a gentle children's fantasy has a very deep and intricate multi-layered web of meaning that is rooted in Japan's spiritual and cultural heritage.

Its about growth and trials of life. Also a theory about child prostitution goin around people say it was in an interview with the man himself but I couldnt find the interview.

Ooooh. I hadn't picked that up anywhere. Not nice.

Yes it is about growth and the trials of life but a Japanese viewpoint sees it very differently from the West. It's good to have assumptions challenged.