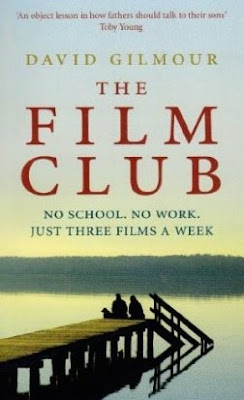 I have just finished reading the book Film Club by David Gilmour. A couple of years ago a colleague gave me a cutting from a Sunday Newspaper which was the story of a teenage boy who didn't do school. His Father made a bargain with him - he could live at home, rent free as long as long as he didn't do drugs and he agreed to watch 3 movies a week with his Father. This book charts those five years - it is autobiographical for David and his son Jesse.

The book operates in two spheres. Set in Toronto, the author works in TV and has a passion for film having once been Film Critic for CBS. He decides to use his knowledge of film, calling on reviews, books, interviews (sometimes his own) to enrol his son in a kind of Université de Cinéma and give him the education he wasn't getting in school.


The choices of films and his introductory sketches and retrospective analyses are all very apt. The story covers a huge range of genres citing 121 different titles. The insights the films give into Jesse's roller coaster of a life are at times helpful and at other times I felt lacking in sensitivity and positively unhelpful. I'm sure I would have done a worse job! Gilmour covers a breath-taking breadth by putting the spotlight on Directors, then on Actors, the way a film is shot, lighting. He highlights individual lines of dialogue and scenes that he feels resonate with Jesse's predicament. From James Dean's defiant swish of the rope in Giant to Patricia Arquette's motivational 'You're so cool' in True Romance, Gilmour tries to impute the self-confidence, la joie de vivre and lack of ambition his son's unfocused life lacks. I think he tries too hard.


The second sphere is the advice Gilmour gives his son about how to cope with broken romance - a pain that is an integral part of the human condition. The wrong assumption Gilmour makes is that together with the films, his previous romantic and sexual encounters provide all the data necessary to enable him to dispense the words he feels his son needs to hear. Naivete. Stuck in a seemingly endless loop of mismatch of communication ability, Gilmour's verbosity is inversely mirrored by Jesse's inability to articulate or express himself in any meaningful way. Eventually, Jesse does find an avenue to give expression to his hurts and feelings - and maybe even his fears. This confirms to the Father that the son has the greater talent. Jesse discovers the ability to be creative in way that communicates. I strongly feel that this one of the most basic human drives - stemming from the Trinity.


This is an interesting and well written book that tells an important story. My own passion for films and narrative as means of reflecting on daily life is, I hope, well documented on this blog. The book's ability to compel people to develop their own catalogue of films to educate people through is perhaps its lasting and most endearing legacy. What films would you choose - which have instructed you? How would use them? What would your hoped for outcome be? the question go on in the Université de Cinéma.


This is a good read - get yourself a copy.
Posted by Duncan Strathie at 21:12