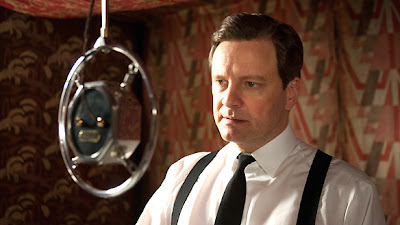 You have probably heard a lot of hype about how good this film is. Believe it! Go and see it now while it's still on.

For my money the three leading actors are worthy Oscar nominations. This film is full of subtle yet sumptuous detail. It is also filled with believable and endearing characterisations that will mesmerise you, draw you in and captivate you.

This story allows the viewer a rare glimpse inside Britain's Royal Family. It shows the intrigue of the interaction between the different offices of state as Europe stumbles towards inevitable war. An unconvincing Tomothy Spall as Churchill is perhaps the only chink in what is otherwise a tour-de-force ensemble cast. Derek Jacobi gives a strong performance as the slimy and thoroughly unlikable Archbishop of Canterbury Cosmo Lang.

The central story is how Prince Albert becomes King George VI and overcomes a stammer in order to deliver speeches to the nation over the new-fangled wireless. It is a timely reminder of the relentless march of technology and how people communicate. The Royals of the 1930's found radio an intrusive and unwelcome medium - what would they have made of Twitter and Facebook?

Helena Bonham-Carter gives a tender performance as the determined and persistent Princess/Queen Elizabeth. Her facial expressions and verbal interjections are spot on and her performance is the personification of royalty. Colin Firth delivers a career defining performance - which if anything is outshone by Geoffrey Rush's portrayal of Australian Speech Therapist Lionel Logue.

It is the relationship between the Prince and the therapist that is the mesmerising and enchanting centre-piece of this film. The Prince whose genetically determined default is to formality and status strikes a marked contrast with the informal and unqualified Harley Street wannabe. The therapist's irreverence is mirrored by Logue's unorthodox and self-taught methodology. He claims no qualifications but bases his methodology on a background in amateur dramatics and teaching elocution which he combined to help Australian troops traumatised and speech impaired after World War I.

The film ends where it began - with the King making a speech. There is an after note in which we are informed that King George VI awarded Logue the Royal Victorian Order, appointing him a Member (MVO) on 11 May 1937 and elevating him to Commander (CVO) in 1944. The Order rewards personal service to the sovereign and admission to it is the personal gift of the monarch. We are told that Logue coached every war-time speech the King made and that they remained life-long friends. A fitting postscript to an extraordinary story.

This is cinema of the highest quality and was fully deserving of the spontaneous applause from a packed Harbour Lights audience. Go and see it - now! You will not be disappointed. I'll happily award it 9/10.
Posted by Duncan Strathie at 14:49