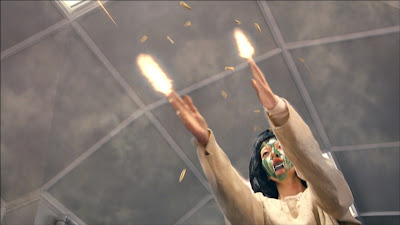 Korean cinema takes a bit of getting into! The cultural signals and metaphors - I am presuming - were largely lost on me. The sub-titles were creatively translated into the vernacular but I wonder how much of that was interpretation rather than straight translation? Nevertheless it is good to watch something that makes you work at it - a good corrective for so much of the unthinking stuff that Hollywood seems to produce!

This film has strong performances from all the characters - particularly the two leads Su-Jeong Lim and Rain, and the visualisation of Director Park Chan-Wook's concepts is stunning. I thought I bought a movie that explored personal identity through the persona of a cyborg - a sci-fi film. What I got was a Korean romantic comedy set in a psychiatric hospital!

Su-Jeong plays Young-goon whose psychosis gradually builds from one day when she comes home from school with a tremendous headache to discover her grandmother thinking that she is a mouse. Grandmother - who appears to be Young-goon's primary carer - is promptly whisked off to the sanitarium where she lives on nothing but radishes which causes unpleasant air pollution! Young-goon blames herself for her Grandmother's predicament. As the Grandmother was being taken away in the ambulance she was mouthing to Young-goon "The purpose of life is ...." but we never hear the completed sentence and it as though Young-goon spends the rest of the film trying to find the answer. Perhaps it is an invitation for us to also consider the question?

We then fast-forward to see Young-goon on an assembly line making transistor radios. She finally flips and fantasises about the instructions coming over the factory PA. She slits her wrist and inserts the power cables from the radio and then turns it on. The resultant shock propels her backwards to the floor where the current charges her internal battery and as the charge builds so the toes in her right foot light up until the charge is complete. We then cut to her mother being interviewed by the psychiatrist as she attempts to understand how Young-goon got into this state. The interview suggests that the mother herself is schizophrenic and so the the idea of of a family of unstable women is given credence.

Young-poon refuses to eat, instead licking batteries and hugging a radio for sustenance in an attempt to recharge herself. She talks to no-one except the machines and lights, wearing her Grandmother's dentures, in the belief that she is a Cyborg. No-one can penetrate her exterior world. That is until fellow patient Park Il-sun attempts to help her. He 'fits' her with a rice megatron which he says can convert food into electricity and therefore not harm her Cyborg workings. She begins to eat.

I won't say any more about the story in case you want to wrestle with this yourself.

I'm not sure what lessons we can glean from this film. Community as place of shared lostness and healing might be one. The need to enter into someone's world to try and understand them might be another - but not recommended for uninitiated where mental illness is involved.

In Young-poon's memories are the 'seven deadly sins' that her Grandmother told her about in her attempts to explain the meaning of life:


1. Sympathy
2. Being Sad
3. Restlessness
4. Hesitating about anything
5. Useless daydreaming
6. Feeling guilty
7. Thankfulness
It seems that this quest to discover the meaning of life is a universal human quest and perhaps the greatest lesson of the story is that we can act as guides for one another if we choose to recognise that we are all interdependent. Echoes of the Trinity!

An interesting film for a rainy evening when there's not much else on. Don't rush to see it. I'll give it 6/10.
Posted by Duncan Strathie at 09:08