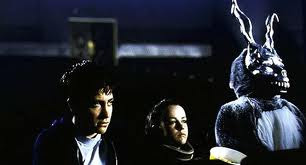 I know this film has been around for a decade and the odd bunny rabbit appears ubiquitously in the racks of  DVD stores, but I hadn't seen this until last night. I always thought I was missing something. I had been, but not what I thought I'd been missing!

My first problem with this film is - what kind of a film is it? IMDb lists it as Drama/Mystery/Sci-Fi - yes it contains all of these elements but the way in which they are put together and the story is paced, make it hard to make too much sense of the whole. A lot of the images and narrative have more a film noir feel about them. I sense that this film is so mysterious that it fails to deliver the potential it promises. Some elements of the story are not explained at all whilst others spoon feed you their meaning. The whole thing has an incoherence about it. IMDb reviews give it a score of 8.2 whilst Rotten Tomatoes gives it 85%. Well, not the first time I will call as I saw it and not be rating it as highly.

That said, not all is lost. there are some fine acting performances - particularly from the Gyllenhaals who play brother and sister and especially from Jake in the lead role. There is a spirited cameo from Patrick Swayze and a strong and nuanced performance from Jena Malone who plays Donnie's girlfriend, Gretchen. Some of the special effects are bit more X-files than anything more serious. The ending of the film works well on the level of sacrificial love, but quite how the outcome is actually achieved is unclear. Who is Frank the rabbit? How is donnie able to shoot him and roll back time? Why did he choose pain and grief for his family in restoring Gretchen to vitality?

The question about how real Frank is and what exactly is Donnie's state of mind are not addressed adequately. If his visions of the rabbit with the metallic head were simply that, then Donnie's psychosis would have better treated in a hospital than through hypnotherapy. Each time the therapist got somewhere important she had to end the session as she couldn't cope. Were his visions caused or treated by his medication? For all of Donnie's 'issues' he seemed to be otherwise well-adjusted as he navigated the choppy waters of High School. His care for the bullied and marginalised, and his courage to call hypocrisy for what it was are commendable character traits in a teenager.

Overall there are too many spurious plot deviations and the inability of the way the story unfolds to hang together means this film, for me, has some serious shortcomings. I can see that it may well be extremely popular for a teen/young adult audience but I'm not at all sure it has a lot to offer the rest of us. I'm going to give it 6/10 and I'm glad I can move the jolly rabbit off the shelf of films to watch and consign him to the library!

Posted by Duncan Strathie at 16:24