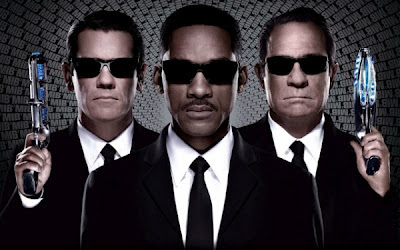 After two months of chasing this film on two continents - I finally made it! Okay, I'll admit upfront that I'm a fan of the franchise and really like the pairing of Will Smith as 'Agent J' and Tommy Lee Jones as 'Agent K' - a kind of alternative Shrek and Donkey if you like!

By the third film of a franchise things normally get pretty stale and I went to see this out of a sense of duty rather than with any high expectations of it being a piece of great cinema. It isn't a piece of great cinema - but it certainly isn't stale either. I was delightfully surprised that not only did the story deliver a series of excellent CGI Alien encounters, but it went deeper and explored the tensions behind the J and K relationship.

The central thrust relies on time travel. It is not handled in a very sophisticated way - but then that fits with the story. What is sophisticated is the introduction of Emma Thompson as the new Boss 'Agent O' in the wake of Agent Z's demise and the appearance of Josh Brolin as the young 'Agent K'.

The story is quick to exploit the racial tensions that existed in the 1960s as 'Agent K' encounters prejudice from law enforcement officers and the general public. I'm not quite sure if it is genuinely trying to say we've come a long way in 50 years or nothing's really changed. Where the story plumbs new depths is in exploring the dynamics of the J and K relationship and why K is as he is and how J got to be recruited by K in the first place. The way in which this is done engenders sympathy for both the characters J and K. The homage to Groundhog Day is subtle and works very well.

The CGI is top drawer and the Aliens embody the right degree of being repulsive whilst also encouraging a degree of curiosity so you want to learn more. The way the story weaves in icons of 1960s America, bowling, cars, baseball Andy Warhol etc is cleverly done. Again the film shows the Manhattan skyline off to good effect with lots of action centring on the iconic Chrysler Building.

I will definitely be adding the disc to my collection when it comes out. If you're after good old-fashioned entertainment go and see it while you still can. I'll give it 7.5/10.

Posted by Duncan Strathie at 10:50