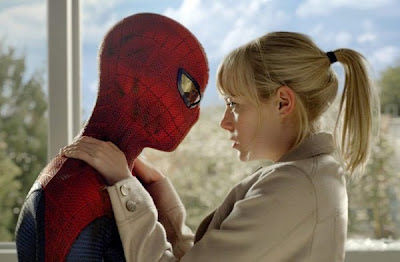 This film takes us back to the beginning and tells us (again) how Peter Parker becomes Spider-Man. There is little that is new in this film. That will appeal to arachnid die-hards - especially as the two lead characters offer a more 'punchy' performance than Maguire and Dunst. The graphics and design are state-of-the-art which sets this film visually above the Maguire trilogy - the lighting in this one is particularly well done.

At the end of the day, the film is a simple super-hero movie. The story is straightforward and serves as a vehicle for the fledgeling Spider-Man to flex this legs and also as a warning against cross-species genetic engineering. Whilst the plot is straightforward it is delivered with an uneven pace and at times limps along whilst at others it almost moves too quickly. The script is similarly lumpy. As a hoodlum shouts after Parker - ''I've seen your face, I know who you are', Parker happens to glance up and see a poster promoting a wrestler in a mask which inspires him to go home, copy the design and hand sew himself his own mask. At the end of the film the last lines of dialogue are equally cumbersome and uncomfortably hold out the batten to taken up in the sequel!

As I said Andrew Garfield and Emma Stone play their characters well, ably supported by Rhys Ifans who plays the baddy and Martin Sheen (now with Sean Connery-style whistling teeth) and lovely Sally Field as his uncle and auntie who take him in when his parents mysteriously disappear. The scenes where the love interest develops between Parker and Gwen Stacy (Stone) are well handled and in less sympathetic hands might have led to her stringing him along for far longer than the poor boy could endure. It is handled with a believable and heart-warming sensitivity.

For me, where this film scores is the subject matter and attempted method of the baddy's efforts to wreak havoc on an unsuspecting New York. When the zeitgeist forces us to live in the shadow of fear of dirty bombs and bio-bombs being detonated in our metropolitan areas, this film makes real that threat as New Yorkers face being mutated into lizards! But we are saved by our heroine Gwen Stacy and her repentant father - and of course Spider-Man. There are a couple of nice touches such as when the construction industry comes to the injured Spier-Man's aid.

This was a nice film to watch with my son and daughter - a long time since that happened! I won't be rushing to add the disc to my library when it's released - but I am looking forward to seeing the new Batman film! I'll give this one 6/10.

Posted by Duncan Strathie at 15:20