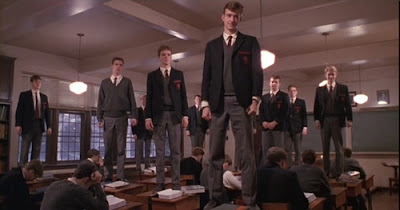 Okay it's 23 years old and now I've watched it nearly 20 times - but it's still a classic and worth re-watching. I used it last night in a teaching session to help exemplify mentoring and helping people achieve their potential. It hit the spot.

The storyline sets a stark contrast between surface learning and deep learning, between conformity and self-expression, between the status quo and an alternative future. Set in the privileged old-world charm of East Coast USA at the end of the 1950's the generation that never had, thrusts out its frustrated lost opportunity through the lives of its children. But the boys, inspired by the free-thinking new Master Mr Keating (Robin Williams), begin to think for themselves and that sets them on a course that is riven with vocation and integrity but which has dire consequences.

This is a film that invites you to accompany a group of young men as they learn what it is to breathe  to love, to feel and as Keating says, "to suck the marrow out of the bones of life". The famous tagline Carpe Diem - sieze the day - is a rallying call to an existential way of being. An invitation to make a difference in a world that demands you conform. The film echoes the call of John 10:10 and it remains inspirational.

The film won an Oscar for its screenplay and it is beautifully shot by Director Peter Weir, with the locations reinforcing and enhancing the story. The acting is strong with a very good cast and you can almost smell the layers of polish on the corridors and dormitories of Welton Academy.

Posted by Duncan Strathie at 23:31