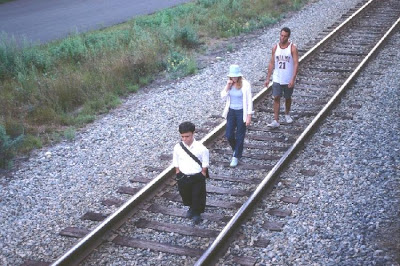 The central character is Finbar McBride (Peter Dinklage). He is passionate about everything to do with railways and at the start of the film we see him working in the backroom of a model railway shop in Hobeken New Jersey, where he fixes locomotives and carriages as part of the shop's repair service. The shop's owner dies suddenly and leaves Fin a small railway depot and some rolling stock in rural New Jersey. With no other option, Fin moves into the Station House and despite his best efforts acquires two acquaintances - Joe (Bobby Cannavale) who is running his father's hot dog van next to the Station and Olivia (Patricia Clarkson) a local resident. The three of them form an unlikely circle of acquaintances - it would be difficult to call it friendship. As far as it goes this is the plot. But this is not a film so much about the narrative arc as about the journey the characters undertake.

Each of the three have their 'issues' to deal with. Fin is a Little Person, Joe is a second generation Cuban emigre and Olivia is working through the tragic death of her son and subsequent separation from her husband. That each of the main characters has a readily identifiable 'issue' with which they are coming to terms is perhaps a little convenient, but I wonder what about most people who spend all their time and energy concealing theirs? Joe is painfully aware that his physicality immediately draws unwelcome and often hostile attention. Afraid of silence and aloneness, Joe cannot let a second pass by without filling it with some usually inane prattle, whilst the whole area knows about Olivia, her volatility and attempts at self-expression through her disjointed impressionistic art.

Each of the three are in some way marginalised and find it difficult to accept thier position. Fin simply wants to be left alone to read his books on railways and spot trains. He walks everywhere, usually along a railway line, as it a solitary and less confrontational mode of transport. Joe is covering for his sick father and sells less than enough to make a living but never seems to worry. Why would someone living in Manhattan drive out to rural New Jersey to sell Hot Dogs in the middle of nowhere? Olivia pops pills and tries to keep herself to herself as she wallows in the grief she cannot escape from.

Each one of them is on their own - yet their alone-ness gradually allows them to build into a community of acceptance. Not acceptance of one another's 'issues' but acceptance of one another - something which transcends their issues. The film portrays a powerful picture of community and the human need for it - even (or perhaps especially) in adversity. This is where the power of the film lies. Sometimes the music and the camera angles are little contrived simply to make the point, but for the most part this is a gentle and heart-warming film - a gift.

Perhaps because of his size, Fin is seen by people (especially women) to be non-threatening and so they disclose their deepest secrets to him quite voluntarily. The openness of a friendship offered by a local school girl empowers Fin to place himself in a position of vulnerability in front of her peers. Joe seems to crave company and relationship but is locked in to caring for his father. Olivia's charms are obvious for all to see but she cannot decide to whom she is committed - or even if she can bear the pain of loving with the attendant risk of the pain of loss.

As I said, I think this is a film about everything - relationships, community, humanity, acceptance and love. Things that are really important and are inbuilt components of our existence. Please do get hold of this film and watch it - you will be rewarded. I'll give it 8/10.

Posted by Duncan Strathie at 13:42

You are bang on saying it is a film about nothing or everything depending on how you look at it.

Dinklage is amazing as ever also :)

Thanks Anon - it's good to know that sometimes I get it right!

Nice review. I kinda liked the movie as I wanted a light hearted movie and I was surprised to see Peter Dinklage. It's good to see another character that he plays other than the epicly well known role he has in Game of Thrones.
It's quite easy to see, and I'm sure I'm not the only one thinking this, but throughout the entire movie, I saw all those characters (even Emily, which is pregnant), giving an image of trains. In a sense we're all trains, we all have our problems/cargo to carry and in the end we have to keep on going and follow our path.

Thanks anon. A helpful observation.

what about the kissing?. Seems to me however, Finbar has become more fond of Olivia than he wish to, since he receive at least two strong rejections from her and still he insist to clear up the air.