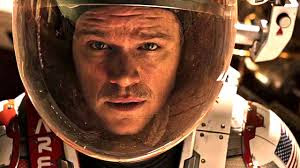 Fans of Matt Damon will love this movie as he is in 80%+ of the shots - and mostly on his own. The plot is straightforward and easy to follow. There is no romance in the film and no person-to-person violence which is refreshing these days. Set in the near future (2030's) the science is believable rather than fictitious and the design of the buildings, vehicles and spacecraft all have a ring of familiarity about them which helps to further underline the believability of this film.

PLOT SPOILER (But there's not much of a plot!)

However, for me the film was not without its problems. There is much to commend it - more of which later but as much as I enjoyed large parts of it, I came away feeling a little disappointed with a host of little things which niggle and gnaw. My first observation may be unfair, but for me the film was too long at 144 minutes. I know that the whole premise of the film is Watney's (Matt Damon's character) isolation and abandonment on Mars for possibly the rest of his life, while plans are hatched on earth to rescue him, but it was in parts too slow and laboured.

Another major grating flaw for me was the overbearingly self-congratulatory "aren't the USA great" which ran throughout the film. There is barely a screen shot that doesn't contain some representation of the stars and stripes! When space exploration these days is becoming increasingly international to help share the cost, this was an American mission with American astronauts attempting to establish the viability of colonising Mars - presumably for America. I know that as a Brit I am not speaking from a position of strength where colonisation is concerned, but the tone was for me more Reagan era than Obama. Perhaps space films are becoming the new Westerns of the 1940's and 50's that helped to lift America from the malaise of WWII's after-effects. By focusing on new worlds we can transcend the problems of this one - but isn't that what sci-fi is largely about in any case?

Where this film does score very strongly is in the visualisation of the Martian landscape and in the strength of the characters in the story. Using images from Wadi Rum in Jordan (a popular location for movies about Mars) the Martian landscape is depicted with large-scale ethereal beauty. The brutality of Martian 'weather' with it's violent storms forms a striking contrast to the tranquil beauty of the red-hued vistas that are lit and captured with care - this film is made for the big screen.

Whilst the film observes Watney's creativity and indefatigability of spirit, it also explores the characters of his crew mates and the NASA personnel back on Earth. NASA Director Teddy Sanders is played by Jeff Daniels who presents an effective leader who does the right thing rather than the thing that will help you to love him. I did like Sean Bean's Mitch Henderson - particularly when the dialogue turned to discussing a scene from Lord of the Rings film in which he features! As mission leader it was Jessica Chastain's Melissa Lewis that stole the show for me and combined strength and vulnerability in a creative way to deliver a thoroughly convincing performance.

Having complained that some sections of the film were too slow, there were other sections that surprised me by their brevity which I found refreshingly welcome. I felt that the film treated me as an adult and invited me to fill in the gaps. The soundtrack of the film was also a pleasant surprise. As Watney is stranded on Mars and the only music he has access to is Lewis's disco music - including of course Gloria Gaynor's "I Will Survive".

For me this was a film in two parts - the parts I really liked and the parts I didn't. For that reason I find it difficult to give it a score but will settle on a compromise 7/10. If you want to reflect on questions of the worth of a single human life and what it actually means to be alive then this will be a good film for you to watch. Furthermore it invites reflection on just how the universe will eventually be colonised - what ethical and moral guidelines will we need to follow - and who knows, perhaps there is already a cloaked Enterprise orbiting the Earth right now waiting for us to develop warp technology and with it the opportunity to make first contact! It is worth seeing - and on the big screen while it's still out there.

Posted by Duncan Strathie at 08:45