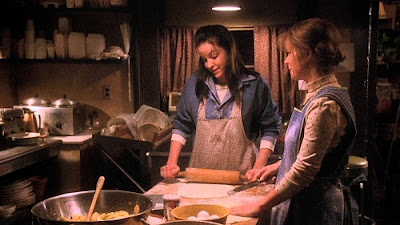 The Spitfire Grill is a gentle but powerful drama about a range of things including fear and guilt, forgiveness, transformation, sacrifice, beauty of creation, healing, preconceptions and love. It was released in 1996 in the USA, winning the viewer award at the Sundance Festival and was then promptly shelved by distributor Warner Brothers. I am grateful to Stephen Brown for having shown the film to me many years ago. I managed to get a Region 1 disc and have been enjoying it with groups ever since. I see that it is available via streaming service providers. This week I watched it with a group from church as we kicked off a new monthly movie watching and reflecting evening. It was well received and sparked some insightful reflection and discussion.

This is a film that is difficult to talk about without revealing the plot, so if you don't want to know, stop reading now.

The central character is Percy Talbot (Alison Elliot) who is a young woman just released from a Maine prison after a lengthy gaol term. She is not a native of Maine and claims to be from Ohio although her accent suggests she is actually from somewhere further south. This immediately adds to the suspicion of the townsfolk of Gilead amongst whom she arrives on a blustery and windswept winter's eve. The local Sheriff, Gary (Gailard Sartain) is tasked with finding the ex con somewhere to live and work and persuades Hannah (Ellyn Burstyn) owner of the Spitfire Grill to take her in and employ her as a waitress for board and lodging. Hannah is cantankerous and strong minded, a closed and initially grumpy woman who seems to live out the combined gnawing pain of her failing hip joint, being a widow and having 'lost' her son Eli (John M Jackson) to the Vietnam War'

The townsfolk divide into two camps - those who are open and willing to give Percy a chance and those who instinctively know that nothing good can come from an ex con. The leader of the 'suspicious' is Nahum Goddard (Will Patton) who is Hannah's nephew and the local Realtor (Estate Agent). His wife Shelby (Marcia Gay Harden) leads the 'open' folk and she soon spends her days cooking in the Grill to help Percy after Hannah is confined to bed after a fall.

The film explores people's growing dis/trust of Percy within a tight-knit New England community. For all of America's glittering cities, such communities are the mainstay of America and help to define a sense of a community's independence, insularity and the ever-present feeling that this is a frontier town working out what it means to live the American dream. When any outsider comes in and upsets the quiet and well-defined but unwritten social structure, the equilibrium is disturbed and things begin to rotate in different and sometimes competing orbits. Crashes are inevitable as people come to new understandings of things that had previously been a long held immovable truth. Transformation is seldom painless and for the community of Gilead Maine, that is also the case.

This is a remarkable film in many ways - although like all films it does have its flaws. The three main lead characters are all women - when was the last time you saw that in a film? Both Burstyn and Harden are Oscar winners and the rest of the cast is strong with good characterisation that easily evokes an affective response in viewers. Who doesn't hate Nahum or love and feel sorry for Joe? The narrative arc of this film is one of the most complete I can remember seeing. I won't spoil it by telling you what happens to Percy, Gilead or how the film ends but will advise that a box of tissues might come in handy.

Why was this film pulled from distribution and never screened outside the USA? The story I heard was that when the distributor researched the production company behind it, they feared that the film was a Trojan Horse for a Christian message and so shelved it. How true that is I don't know. All I do know is that it's a pity. Yes, the main themes are central to the Christian message but then so are the themes of most superhero movies. The actors are all mainstream and if anything the Church comes off rather poorly in this film. Many of the characters have Biblical names - but then so do lots of Americans. The production company was Gregory Productions which is a non-profit organisation (charity) operating out of Mississippi. Their logo is a lion lying down with a lamb and the rumour I heard was that the seed funding came from the pension fund of the Catholic Diocese of Mississippi. So what? This is a good film that stands on its own two feet and for those who wish to probe and look a deeper as they reflect, it may well provide some glimpse into Christian thought. But then doesn't all of life do that?

I happened to be in the area of New England where this film was made when on a visit in 2012. It was in fact shot in the township of Peacham Vermont and here is my photo of Peacham General Store which became the Spitfire Grill. 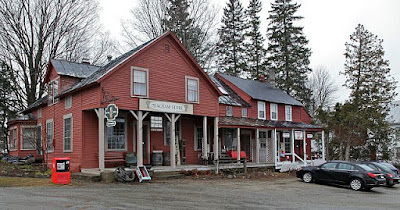 The town was dead and everything was closed. It looked like the General Store hadn't been open since the film was made and there is no steeply wooded hillside leading up from the back porch. My visit was a good experience - once I had braved miles of unmade roads and travelled for hours without seeing another living thing! I am glad I have been to Peacham Vermont. If I am ever in the area I will visit again. This is a film well worth watching. I'll give it 8/10.

Posted by Duncan Strathie at 10:49