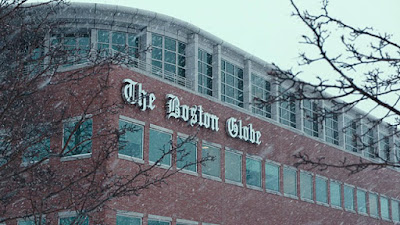 Parts of me are still numb more than 24 hours after watching the film. As a priest I have been bruised and battered by the story that this film unfolds. I wanted to stress that I am not Catholic - but that only points to my empty selfishness and does nothing to offer any salve to the wounds - on both sides - that are still open and raw. What a painful mess. If you don't know what the subject of the film is, it is a film about a team of journalists uncovering the systematic abuse of a very large number of children by Catholic priests in the archdiocese of Boston over many years. It transpires that the abuse was widespread - globally.

The film is as good as the story is bad. To have won Oscars for Best Film and Best Original Screenplay is truly fitting - but the accolades in other halls are the ones that will matter more to the cast, to the real life journalists on the Boston Globe Spotlight team and to the victims. In any other year Mark Ruffalo who played Mike Rezendes, would have won Best Actor hands down. A gripping and passionately absorbing performance. Stanley Tucci (Mitchell Garabedian) and Rachel McAdams (Sacha Pfeifer) along with Michael Keaton  (Walter 'Robby' Robinson) also gave stand out performances - as did Liev Schreiber playing the introvert and understated Editor Marty Baron.

I cannot remember when two hours and eight minutes last passed so quickly. The dramatic tension, pace and development of the narrative are brilliantly maintained in a consistent and believable way. It would have been so easy for the film to have become a condemning sermon, or simply a vehicle for character assassination or to have gloried in the Spotlight Team, but it is none of these. It is never without drama, but because it is based on real events, it has an almost fly-on-the-wall documentary feel to it. It is the story which drives the film forward as it offers an exemplar of investigative journalism at its best.

The film offers a number of challenges:

The original response of the Catholic Church was to shuffle the pack to seemingly promote the Cardinal at the centre of policy of the toleration. It is obviously not something that would be promoted publicly whilst underway, but I hope that under Pope Francis reforms are underway to ensure this never happens again. He tweeted recently "God has caressed us with his mercy. Let us bring God’s tender caress to others, to those who are in need." There are enough people in need in the world without the Church creating more - and I know this isn't restricted to just the Catholic Church.

As painful as this film is, it is important that its story is told. As a film, it's top drawer in almost every respect. I think it will retain its status and place among the best of modern films. I will certainly be adding the disc to my collection - but will have to choose carefully the company in which I watch it! As a film, fully deserving of 9/10.

Posted by Duncan Strathie at 16:43