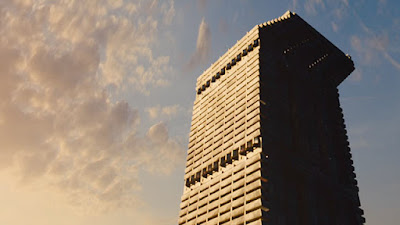 Starring the ubiquitous Tom Hiddleston I thought that this would be a safe bet as a good movie to watch. Besides it was a cover feature in the April 2016 edition of Sight & Sound. I should have twigged that as I watched a couple of trailers for upcoming horror films before the main feature, that High Rise was going to be a challenge. Tasha Robinson reviewing the film in The Verge said "In J.G. Ballard’s High-Rise, the metaphor eats the story and Tom Hiddleston eats the metaphor". I'm not sure I fully understand her comment - but then I'm pretty sure I didn't understand all of the film either! But it seems about right for me.

I understand that Ballard's novel is an important piece of literature that has social, historical and political capital. I thought I understood the premise of the novel going into the film - coming out I wasn't so sure I did at all. What could have been an in depth thought provoking exploration of class structure and aspiration in a free-market economy descended into a dark place that only delivered an expose of nihilism. If you value life - don't watch this film! Not even the acting performances - and they were good - redeem this film.

Dr Laing (Hiddleston) attempts to escape the rat race of the city and applies to move into the High Rise. His application is accepted and he moves into apartment 2505 in this 40 storey block. Designed by the architect Royal (Jeremy Irons) the block, built in the early 1970s, is a self-contained society with the lower classes on the lower floors and the architect occupying the entire top floor penthouse. The block contains a gym, swimming pool and supermarket - but residents still have to go out to work - all driving their late 60s and early 70s cars (wonderful nostalgia!). The basic activity is to throw parties that are resonant in style with the social status of the floor the host occupies. On the lower floors it is disco, booze and drugs. In the penthouse it is regency fancy dress! In any case, the thing they have in common is much booze and much bonking.

Laing is clearly a man who presents one thing on the outside and lives another on the inside (don't we all?). In this sense Hiddleston delivers a strong performance. His sister has recently committed suicide and he has also recently divorced. His grey suits, grey character and in time his grey flat all point to someone happy with their status in the mid levels who is merely seeking a degree of anonymity.

As the story progresses the infrastructure of the block begins to fail and sends the residents into a mirroring downward spiral. Anarchy and class wars break out and the film descends into a drunken, violent, abusive orgy.  A state it seems to celebrate and wallow in for far too long. I'm used to confronting dystopian apocalyptic worlds but they usually contain some element of hope. High Rise is devoid of hope and presents only self-gratification as a valid way to live. Some of the roles of the women in the film - and the children, offer occasional glimpses of hope of things being otherwise, but in the end everyone turns to violence. Why did the film have to end with an archive speech from Margaret Thatcher about Free Market Capitalism and the need for the government's not to interfere?

Several folk walked out. I almost joined them and afterwards wished I had. I'm all for exploring ideas that push boundaries but this film is a waste of time and effort - and the £22 I spent on tickets. Why it only had a 15 Certification I do not understand. Parts were brutal beyond belief. This is a film you do not need to see. I'm not even going to give it a score!
Posted by Duncan Strathie at 21:08