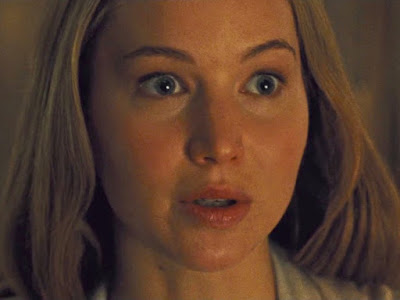 Well, next time I'm looking for a disc to be the fifth in a special offer (5 for £XX), I will look more closely! I thought that with a cast featuring Jennifer Lawrence, Javier Bardem, Ed Harris, Michelle Pfeiffer and Brian and Domhnall Gleeson and Directed by Darren Aronofsky, that I was on to a good thing. Caveat emptor!

Those who are familiar with my blog will know that I am not a fan of horror films. Some will argue that this is just a physcological thriller - well if so, it is an horrifying one! Confession: I stopped watching it after the first hour. Therefore, you have permission to read no further, if you so desire.

From the outset this film is unclear about it's intention. Being curious, I interrogated a couple of reviews who found consensus in describing it as a Christian/Biblical creation allegory. The main character is a creator, yes his wife shapes that creation, yes Adam's ribs have recent wounds, yes two brothers fight over their inheritance with one killing the other, yes something that was once dark and lifeless has been loved back to life.

The main two characters are apparently not named until the end credits. The first hour of the film, at least, takes place in a remote large house surrounded by grassland which in turn is ringed with Edenic trees. J-Law's character is the epitome of beauty, innocence and devotion but if only she had allowed her fear to inform her curiosity we would have had a much more interesting and different film!

The cameras are hand held and always on the move. Rooms within the house appear to change floor at random and whichever floor you are on, each room seems to radiate off a central hallway which is impossible as apart from the ground floor, the centre of the house is open to a cupola. The lighting is mostly dim which frustrates more than adding a greater sense of mystery.

If you like having your head messed with and don't mind a film whose plot is seemingly nonsensical, then this is right up your alley! It divides people and the responses are usually always polemic. The actors are great - I'm not so sure about the characters they play or the narrative in which they are located. I'm sure this is great cinema for those with brains and sensibilities that can cope, but for me, the second hour will forever remain unseen. I'll give it 4/10.

Posted by Duncan Strathie at 16:47