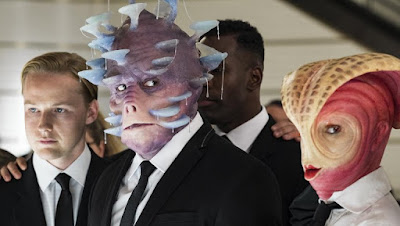 There are times when a franchise is milked dry and we have sadly reached that stage with this film. I am an MiB fan - the first two anyway, number four pushes things too far. Even the gravitas of Emma Thompson and Liam Neeson cannot save this film from mediocrity.

Having said that, cruising at 36,000' it harmlessly passed a couple of hours and it felt nostalgic to re-engage with the universe of MiB. There are big set piece blaster battles, new aliens to marvel at, great CGI and a limp script that hamstrings the main actors into delivering well below what they are capable of. At times Chris Hemsworth's Agent H was wooden.

The moral of the story is don't cheat. The locations look good - New York, Marrakech, London and a CGI Paris. Two new alien characters - assassins - looked and behaved very much like The Twins from Matrix Reloaded - I kept expecting Neo to appear!

In reality, I found little to commend this film and will not be adding the disc to my collection. If you are stuck on a plane it will pass a couple of hours otherwise invest the time in something more life-giviing! I'll give it 4/10.

Posted by Duncan Strathie at 09:49