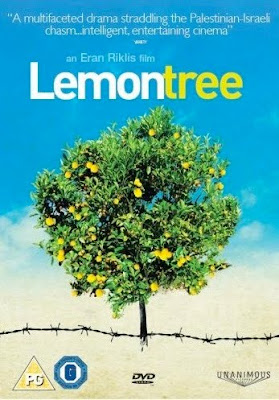 This is a powerful and moving film with exceptionally strong acting performances. It would be easy to say that this is demonstrative of the Palestinian struggle against the occupying Israeli forces. The picture is so much more complex and as is noted in the film, based on a struggle that has been ongoing for 3000 years. Let's consider this film as illustrative rather than demonstrative.

The plot is quite simple. Salma Zidane is widowed and her children have left home. She tends her inherited lemon grove and ekes out a subsistence living with the aid of Abu Hassam who has worked in the grove for 50 years. One day new neighbours move into the swanky new villa next to the grove - it happens to be the Israeli Defence Minister and his wife. The secret service consider the lemon grove to pose a threat as terrorists could launch an attack from there and so issue a notice to requisition the grove - generously offering compensation.

Zidane decides to fight and, with the aid of a local attorney, the struggle progresses through the courts and ends up in the High Court. Meanwhile, the Minister's wife is concerned about the way in which the land is to become a sterile safety zone ending her neighbour's livelihood and demeaning the respect of the tradition the inherited grove represents. She seeks to make contact with Zidane but is prevented by her minders. The case gains not only local and national notoriety, but also becomes an international news story. The Minister is put under increasing pressure in news conferences where the questions always turn to the lemon grove. The stakes are raised even higher when his wife gives an interview to an old friend who is a journalist and basically supports the Palestinian woman and not her husband.

The outcome is powerful and no-one caught up in the story escapes the consequences of the outcomes, either by justice through the courts or in terms of relationships. I won't spoil the end as it's a fairly recent film and you may wish to watch it - I recommend you do.

I often comment on violence within films on this blog. Usually, I am referring to the blood and guts, fisty-cuffs and weapons type of violence. This film is the most violent I have seen in a long time. The calculated violation of Zidane, her family and her people is mind-numbing. The actions of the Israelis are predicated on a potential threat that may or may not materialise. As is pointed out in the film, no terrorist activity has been linked with grove since the creation of Israel in 1948. the justice meted out by the Israeli Supreme Court is a justice based on a utilitarian ethic and is not justice in the eyes of the Palestinians. Context is everything - even in terms of deciding what is just.

The closing picture of an isolated and lonely Minister and violated and brutalised woman shows that there are no winners in this game.