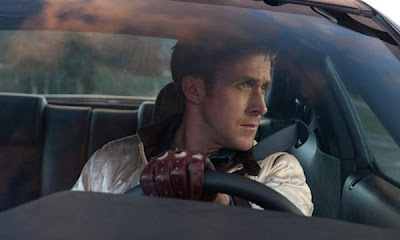 From the trailers and hype, I was really looking forward to this film. I was hugely disappointed. There are some cool car chase scenes, but not that many given the way the film is set up. The central character Driver (Ryan Gosling) is a movie stunt driver by day and a getaway driver by night. It is clear he has impressive driving skills but his character is one dimensional and vacuous. His life is completely empty and he seems incapable of displaying any emotion. He also suffers from a twisted morality that works one way in one context and another way in a different context.

The film quickly slides into a regular mobster movie with contracts being taken out on everybody. Pursuits and murders follow and become entwined with the Driver's developing love interest in his neighbour Irene (Carey Mulligan). The whole plot gets over complicated because the mobsters are unable to untangle who is a criminal and who is an innocent bystander caught up in the melee.

The story lurches from one encounter to another without any real progress and in the end turns into a circular murder-fest involving the central characters. Where the film delivers the greatest disappointment is in the graphic and gratuitous depiction of the way in which many of the people meet their end. It is simply unnecessary and now comprises a series of images I would like to delete from my internal video wall! Why were these things included in this way? Is it to give the film credibility for those who need spurting blood and exploding guts and brains to render a movie watchable? If so, this should have been consigned to some niche market and not put on general release.

The characters are very stereotypical, the acting lacks finesse and the plot lacks credibility. The only bright exception is Carey Mulligan's performance. As I said - very disappointing. One to avoid. I'll give it 4/5 - which is generous!

Posted by Duncan Strathie at 10:42

But you didnt discuss the meaning... at all.
This guy knows what he's talking about: http://premiercritic.blogspot.co.uk/2011/10/drive-2011-review-analysis.html

you could learn something from him.

Highly disagree. This movie was great. It was an epic tale of how someone is always bound to their nature. I'm always struck by the "if you love it, then set it free" endings. I was left wanting more . I'm very glad I gave this movie a chance.

Thanks for the comment. It's clear this is not my kind of film and because of that other opinions are available. I try to call things as I see them ... glad we don't all like the same stuff.