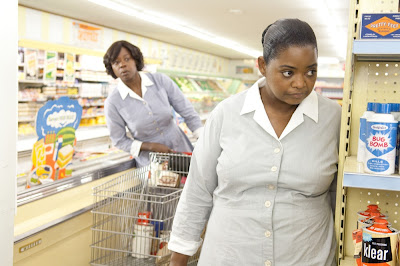 This is a wonderful film - a gracious gift. Go and see it - now!

Set in Jackson Mississippi in the early 1960's this film explores slavery 60's style and the question it provokes is what would you have done if you'd been born into Mississippi's white elite? Would you have colluded with Hilly Holbrook (Bryce Dallas Howard) or confronted with Skeeter Phelan (Emma Stone)? Would you see Aibiline (Viola Davis) and Minny (Octavia Spencer) as commodities to be owned or as human beings to be celebrated?

The unashamed racism that the film portrays feels like something from another era and not my childhood! Skeeter returns from university - perhaps a northern liberal university - to discover the family 'Help' has gone to live with her family in Chicago. She also finds the attitudes of her old friends who are now ladies of leisure to be stifling and unacceptable. As an aspiring writer, Skeeter pens an anonymous book based on the anecdotes and reflections of the maids employed by the wealthy white women of Jackson. The book reveals the pain and abuse suffered by the 'Help' as they are paid below the minimum wage and are excluded from the benefits of welfare and health care.

This film could major on the evil of one set of people owning another. In a way it does. (How is this different from buying non Fair-trade goods from the majority world?) But this film doesn't wallow in the violence and abuse suffered by Jackson's black community, it rises above that to demonstrate that grace is a universal currency that can be cashed in for the betterment of everyone.

This film reduced me to tears at three points. It is a moving story - a courageous story, where people who are trying to do the best for their family's, what you and I would wish to do, face an uphill battle but never lose sight of what it is to be human. The acting is brilliant and forces you to reflect on what would you have done in either situation? I also reflected on what it must have felt like for the actors in this film - both black and white. It can't have been comfortable on either side.

Posted by Duncan Strathie at 19:51