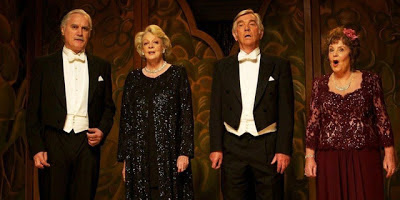 This is the fourth film within a year to tackle the subject of ageing (Best Exotic Marigold Hotel, Hope Springs, Amour) and as a Directorial debut from Dustin Hoffman it is a tour-de-force. This is a film with a simple story and four main characters ably supported by a large ensemble cast. The way in which the characters and story sensitively handle the nuanced and multi-faceted complexities of growing old is both stunning and breath-taking. The vehicle for this story is a home for retired musicians and singers - most of whom are classically trained and were at the peak of their game earlier in life. What adds the icing to this cake is the gentle and self-deprecating humour that flows throughout the film.

The four main actors are Maggie Smith, Tom Courtenay, Billy Connolly and Pauline Collins. They are supported by a host of familiar faces (Michael Gambon, Trevor Peacock and Andrew Sachs to name but three) many of whom appear to be playing themselves - which of course is the epitome of good acting - or is it just good casting? Each one of them not only turns in a performance worthy of a nomination but they do so in a way that ages their familair-to-us personas so effectively - Maggie Smith has a gaze into eternity that so perfectly depicts how for some, ageing is seen as an empty and futile decline into oblivion. "I used to be someone" she repeatedly tells everyone whilst Billy Connolly's character embraces who he is now, recognising the limitations that age has brought but getting away with continual and direct flirtation on account of his charm.

The premise of the story is quite simple and the interest is maintained by seeing if the characters will allow the central problem to be resolved satisfactorily or not. The way in which the characters' professional and private pasts intertwine and so impact their need of one another (or not) within the community always provides interest and intrigue. Some hang on to old and bitter rivalries whilst others are content to let bygones be bygones.The richness of the musical landscape of this film is astounding and demonstrates what retirement with purpose and passion can bring to (gifted) older folk.

This film had me crying at several stages - but afterwards it was a full two hours before I felt I might not burst into tears at the slightest provocation, such was its power to evoke an affective response within me. Maybe I was caught on a bad day (I don't think so) or maybe we have here a film that has captured a slice of life that is so often ignored and treated it with full-on respect, dignity and humour, to deliver not only a lesson of great encouragement but a piece of entertainment that is first class in every respect.

Posted by Duncan Strathie at 17:47